Many’s the time in the last few years when, both in the concert hall and at home, i’ve found myself listening to yet more music for random-acoustic-instrument plus electronics—and been absolutely bored off my face. The quest for novelty seems to have ruled the electroacoustic roost for years and years, dominated by an approach to music-making that largely consists of: instrumentalist plays some material; computer (i.e. Max/MSP patch) does something with that material; instrumentalist responds to the computer; and back and forth until one of them decides to stop. Often the nature of the relationship between player and computer, as well as a sense of structural coherence and inner logic, are both fuzzy and ill-defined, and while works like this may perhaps have a skin-deep beauty that’s briefly beguiling, ephemerality remains their strongest characteristic. 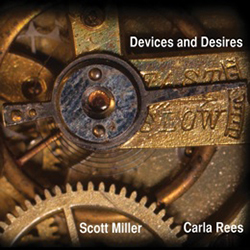 It’s no small triumph, then, that the new CD from Carla Rees and Scott Miller, exploring music for flute and electronics, is so exciting and memorable. The title, Devices and Desires, is allusive—not a million miles from Ligeti’s ‘Clocks and Clouds’—evoking cool and hot impulses, a juxtaposition of measured rationality with unpredictable whim. From this melting pot of head and heart, Rees and Miller have created six pieces that each occupy a different position on the composed/improvised continuum, including “a fully composed work …, structured improvisations … and free improvisations … All of the electronic sound heard on the CD is the result of processing the sound of the flute, whether in real-time, from a sample taken earlier in the performance, or from a recording made years before we made the recording” (from Scott Miller’s programme notes). Both flute and computer fall outside convention; Miller uses the Kyma X sound design environment, while Rees uses a Kingma System C flute, an instrument designed to enable quartertones to be easily played. These instruments were brought together in “an inspired three-hour recording session”, and the result is Devices and Desires.

Although the six pieces differ considerably in the extent to which improvisation is involved, the consistency throughout is striking. Even the one “fully composed” piece, Anterior/Interior, has a loose, spontaneous quality, in which small, delicate suggestions from the flute gradually develop and become scrutinised in greater depth. The transition to a more demonstrative music is strong, initiated when the flute abruptly switches from soft susurrations to jet whistles, in turn morphing the computer from a gentle purr to intrusive insect-like sounds. Having allowed the flute to take charge, it falls to the electronics to derail the dialogue with some equally sudden percussive blasts. While in some ways Anterior/Interior is a paradigm of all that follows, the other five pieces go very much further to blur the distinction between flute and electronics. Two works in particular pretty much fuse them completely; in Beauty is Eternity Gazing in a Mirror, their respective pointillisms gradually piece together into a kind of floating mosaic, integrating entirely into each other’s timbres. Somehow, even when the electronics adopt B-movie-esque analogue whirrs and whoops, they remain cemented together. By contrast, bending reed emerges from slow, lingering shapes, but again the computer and flute (comfluter?) become a single sonic entity, which on this occasion has a highly moving melodic sensibility; at different points they combine to resemble a giant multiphonic, a whole flute choir, and even something like a an abstract carillon.

As its title implies, Omaggio a 1961 draws on a palette redolent of earlier electroacoustic music, with a sharply separated stereo field (augmented by overt panning) and abrupt outbursts of noise. The piece also loosens the bond between the players, allowing them to divide and coalesce freely; sometimes the flute is projected outwards in all directions by the electronics, elsewhere it’s enclosed by them on all sides. Despite this more elastic form of interaction, the sense of one player directly and immediately influencing the other continues throughout. This is taken to the nth degree in Seriously, This is a Commitment, the most rhythmically energetic piece on the disc; the opening is built upon a forthright hocket, in which the electronics repeat, with a tickle and a flourish, the assortment of blurts and calls made by the flute. As it expands, the interaction is both playful and earnest, like an agitated conversation happening one syllable at a time; lengthy sighs protrude, though, ambiguously hinting at impatience and/or pleasure. Having spent much of the album united, in the final piece, haiku, interrupted, computer and flute appear at first to have become twain once more, timbrally distinct and with the electronics humbly radiating Rees’ bold opening gestures. But as it continues, Miller overlays additional flute material, frequently indistinguishable from the live flute, culminating in a dense, slow-moving chorale. The last third of the piece comprises a lengthy fading away, solitary notes sounding to the last, like increasingly lost animal calls.

Every moment of Devices and Desires testifies both to the maturity and skill of Scott Miller and Carla Rees, but even more to the superbly intuitive and seamless nature of their collaboration. The range of ideas, colours, timbres and interactions they explore is huge, yet all six pieces are distinct and well-considered, genuinely immersing the listener in their coherent, cogent soundworlds. An album like this inspires real hope and optimism for the future of electroacoustic music.

Devices and Desires can be ordered directly from Carla Rees’ Rarescale website. Excerpts from four of the tracks can be streamed below, and the programme notes can be read on Scott Miller’s website, here.

Electronic music provides community/comfort to the initiated much the same as any other genre to its “fan”. In becoming genre, however, it embraces the expectations (prejudices?) of genre. In this respect, I have to agree whole heartedly with the reviewer. I also agree that what Rees and Miller have done is create a sound landscape as refreshingly varied as it is beautiful. Each piece’s shape and sonic blending speaks of advanced compositional technique that everyone from jazz to classical aficionados (perhaps, even some rockers) should find engaging. The shame (and here I hope I’m wrong) is that market labeling will assume/insure the choir will be preached to (more or less), while the uninitiated will dismiss a very soulful body of work as noise or intellectuality. Given half a chance, this type of musical inventiveness has enough timbrel, melodic, and rhythmic richness (dare I say it again, “soul”) to successfully cross over marketing’s often inflexible boundaries.

[…] this CD back in June, i remarked on how different these six pieces are from the majority of contemporary electroacoustic […]