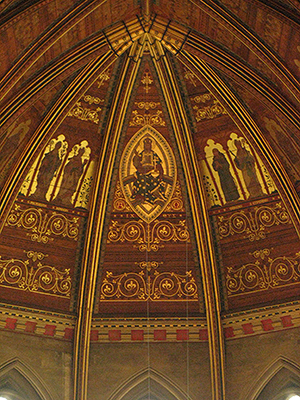 Last week’s Advent Carol Service from St John’s College, Cambridge, once again included several pieces of more recent music. The newly commissioned piece came from a composer i’ve not heard of, James Long. Long’s anthem, Vigilate, weaves together words from the Biblical books of Mark and Revelation to arrive at a text that, in a nutshell, backs up its titular imperative—“watch!”—with an emphatic “or else”. The music is fairly standard-issue new choral music, yet it’s not without some telling moments; the opening and closing stanzas perhaps punch hardest, and while Long’s use of snatches of Latin to echo the English is odd, the appearance of “gallicantu” (“cock’s crow”) is nicely judged. The middle stanzas lose their way somewhat, getting bogged down in the words, but the conclusion of “and every eye shall see him, And they also which pierced him”, where the men’s voices are abruptly silenced to leave just the trebles, is very striking.

Matthew Martin, whose fine setting of Adam lay ybounden was included two years ago, was represented by the Magnificat from his St John’s Service. It’s a world away from the po-faced blandaries of most settings, veering between heavy, muscular posturing and rather delicate, patient passages, enabling these utterly over-familiar words to convey an impressive range of emotions. The harmonic language, while founded in tonality, is regularly bent out of shape in a way that drives the music along, with only the final chord seeming a little predictable.

These were the only demonstrably contemporary works in this year’s service, but also worthy of note was William Whitehead‘s arrangement of The Seven Joys of Mary. The gradual way Whitehead increases the weight and substance of the music is terribly effective, turning the carol into a drawn-out crescendo. However, the music wisely drops out of this process for the sixth stanza, where a baritone solo intones the words referencing Christ’s crucifixion. It’s brave to do this just before the final verse, yet while it’s a potent aside, it doesn’t in any way disrail the overall sense of building momentum, allowing the closing verse to be as wildly rousing as it should be.