Best of the YearCD/Digital releases

The list is what brings a world of chaos into some kind of pattern. The list fixes a broken world floating out into the outer world of emptiness. The list links us to ourselves, places us together, puts us in order. The list soothes us in the way it organises memory and shapes the consciousness. Everybody loves a list for making sense of the awesome nature of all the stuff that surrounds us. The list is at the heart of everything. Everything is part of a list. Humanity is one long list linking nothing with something.
(Paul Morley, Words and Music)

Paul Morley telling it how it is, & as the year starts to fade away, it’s time once again for the series of lists detailing the best of the best that’s passed through my eardrums in the last 12 months. We begin, as ever, with the ten most outstanding EPs.

Reviewed last month, i described Jeff Feldman’s debut release as demonstrating “a seriously exciting new voice […] that effortlessly combines experimental glitchtronics with fervent lyrical outbursts”. Songtronica has got into a bit of a rut in recent years, so Feldman’s refreshing take on it is extremely welcome, particularly when articulated by the likes of Elsieanne Caplette & Angela Boismenu. The success of this fine EP bodes very well for the future; a subsequent album could well be a highlight of 2013.
[Bandcamp – free download]

Zac Pennington’s Parenthetical Girls have spent the last few years releasing a series of EPs exploring songs that somehow manage to be both psychedelic & coherent. The fifth & final EP is the most telling of them all, synthesising a bewildering collection of idiomatic references—both dated & current—into a miniature song cycle that encompasses both floor-stomping & high lyricism. It’s witty & whimsical, but Pennington’s lyrics keep the whole thing grounded in raw emotion.
[Parenthetical Girls; & while we’re at it, in the last few days they’ve released a free Christmas EP that’s well worth hearing, available from their Bandcamp site]

My interest in Tom Jenkinson’s work has waned somewhat, but this stupendous EP is impossible to ignore, the five tracks delivering the kind of breathless tautness that’s been either missing or diluted in his more recent work. For all its brevity, there’s considerable ambition on display here, even when (as in ‘Unreal Square’) the basic material seems unpromising. Jenkinson’s abilities often crowd out his imagination, but the KCRW Session is a thrilling example of what happens when the two work in harmony.
[Bleep]

There’s a beautiful element of surprise on this EP; unlike most ambient music, it doesn’t rest on its laurels, but keeps its textures moving, introducing new elements when the moment seems right. These unpredictable moments don’t just change the manner of the music but gently alter one’s perceptions of its overall shape. That in itself isn’t anything especially clever or new, but their intuition for judging how to structure these loose, drifting soundscapes is exemplary.
[Erased Tapes]

The urge for musicians to reach to an electronic past in an effort to find some kind of wistfully implicit meaning doesn’t seem to be suffering any decline (more’s the pity), but occasionally there’s an example of exciting retrophilia that hits the bullseye. Ken Snyder, a.k.a. Coda, is a chiptune & videogame composer whose music is given away free on his website, but in Tracer he’s widened his scope. The result is four tracks that capture wonderfully the soundworld of 80s computer music while sounding irresistably fresh. Think Tangerine Dream without the pretensions.
[Bandcamp]

As is her wont, Björk has farmed out the songs from her latest album to a plethora of remixers; the harvest, released in eight installments, is of decidedly mixed quality, but the pair heard here—both by Current Value—are definitely the cream of the crop. His take on ‘Thunderbolt’ subjects it to some wonderful drum & bass liberties, transforming the gentle original into a bristling slab of energy. ‘Hollow’, no less energetic, is made radiant by a shining corona of white sound. Remixes have long been the bane of all decent music, but these two are rare examples of what they can be in ingenious hands.
[Bjork]

Matt Waldron’s musical project has been rather quiet of late, in part due to his ongoing efforts to remaster & reissue his previous work. His only new release of the year, this twenty-minute act of grandiloquence vividly testifies to Waldron’s surreal but unerring ear for unusual sound juxtapositions (including an “amplified rat cage” & wonderfully-named “vox inhumana”). Snuffling beasts & bullhorns jostle amidst a fiery drone with busy, machine-like inner workings. Every irr. app. (ext.) piece seems to present an inscrutable but nonetheless enthralling narrative, & Neognath in Machina is absolutely no exception.
[Sold out; excerpts here]

Inspired by the Nabokov story of the same name, Terra Incognita explores further the kind of introverted, near-silent monochrome that has occupied Davis & Uitti’s recent collaborative work. The instability of Uitti’s spare drones & Davis’ fleeting clarinet figurations create a desolate space lacking any certainty of substance; in keeping with the title, nothing seems familiar, nothing ever quite materialises as one thinks or hopes it might. That may sound frustrating, but the tension in this intangible music is utmost compelling.
[Wist Rec]

Kirschner’s most recent work is typically beguiling, & goes no little way to consolidating the free-form paradoxes that have fascinated him for so long. The texture here is perhaps his most complex to date, incorporating muted piano, strings & vibes; their movement is slow but constant, quasi-arbitrary, their interactions passive & non-directional; independently they work towards a much larger stasis (Kirschner’s fondness for Feldman has never been more apparent). There’s often an air of austerity pervading Kirschner’s more lengthy explorations, but it’s sublimated here by the work’s magnificent, glacial beauty.
[Kenneth Kirschner – free download] 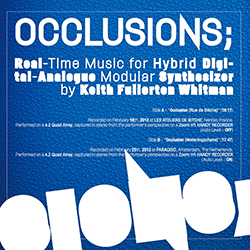 Keith Fullerton Whitman’s music is like smelling salts; it jolts your system again & again as the electronics, seemingly with a mind of their own, endlessly spin & career off in entirely unexpected, barely-imagined directions. The ostensibly ambiguous nature of Whitman’s own involvement—to what, if any, extent are the processes allowed to run unchecked? how/to what end are they guided or controlled?—lends his generative music a genuinely uncanny quality. The two pieces heard on Occlusions—named for the French & Dutch streets on which their performances took place, Rue de Bitche & Weteringschans—are no different, manifesting a kind of ‘latent narrative’ that is in all likelihood entirely imaginary but no less compelling for that.

What they constitute most is a simply mesmerising tour de force of improvisation. Whitman has stated that “the seemingly arbitrary pacing is actually the most intricate part of the piece; largely hinging on a given audience’s reaction to the music as it starts, continuing in a quiet, sparse way, building subtly until an understanding between listener & performer is reached”. The sheer quantity of intense invention is seemingly difficult to comprehend, difficult to take almost—Whitman himself, in an amusing but entirely unnecessary apology, admits this is “rather difficult, un-resolving music” & that “i’ll understand completely if it’s not your kind of thing”(!)—but there’s no disadvantage whatever in simply riding along its exhilarating surface, delighting in every juddering paroxysm & glade of repose that Whitman sees fit to create. Of course, music like this could almost go on forever, certainly very much longer than the two 18-minute morsels presented here, but it’s a wise decision of Whitman’s to keep things confined, & as a result both pieces feel profoundly satisfying.

“i’m happier with this particular music than i have been about anything i’ve made in a very long time” says Whitman, & well he should be; this is some of the most breathtakingly original electronic music of the last decade. A marvel to behold.
[Mimaroglu | Boomkat]