HAPPY NEW YEAR TO YOU ALL! 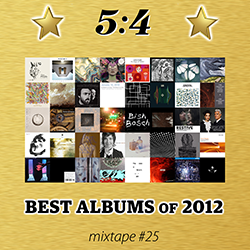 Today marks 5:4‘s fifth anniversary, and so i’d like to take this opportunity to thank all of you who regularly read, share and respond to the articles and music explored here. Since 2008, the blog has grown from being an occasional hobby (reading the earliest articles, that fact is rather painfully obvious) to something that now receives significantly more time and attention. i very much hope that 5:4 can grow and become even more interesting and useful in the next five years; all comments, criticisms, suggestions and other feedback is always very warmly encouraged.

But to return to the present, and to continue our annual tradition, here is a new mixtape featuring one track from each of the forty entries on my Best Albums of the Year list. The mix includes more extreme dynamic variety than in previous years, so while i’ve done a little to mitigate that, be warned that at times the music veers between extremely soft and very loud indeed. As ever, if you like what you hear in the mix, please support the artists and buy the music; links are included on the last two days’ posts.

i’ve remarked in the past on the provisional nature of all ‘Best of’ lists, and so to keep things current, i’ve updated the summaries of the Best Albums/EPs of the Years, to reflect further listening than had been possible at the time; the revised lists can be found under The Lists on the main menu.

The mixtape lasts a little under 3½ hours; here’s the tracklisting in full:

Simon, Happy New Year and many thanks, as always, for this year’s roundup. Some interesting stuff for me to check out. Best regards, Markus.

Happy New Year to you too Markus! Sorry to hear you’re having problems with the mix tape link – i’ve checked & it definitely works fine, so do keep trying. i’m not keen to post on SoundCloud, so hopefully it’ll work for you soon…

Great stuff. Contributed to a profound experience flying over Mongolia and Siberia last winter for me….