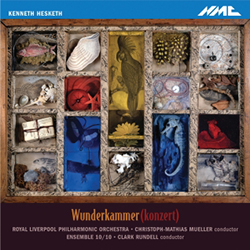 Among the recent releases from the NMC Recordings stable i was pleased to see one devoted to the music of Kenneth Hesketh. Ken’s music has intrigued me for some years, and i’ve had the good fortune to conduct one of his works (Fra Duri Scogli) back in 2010. The new NMC disc brings together a cluster of pieces, most of which were composed around five years ago. They include no fewer than three orchestral works, plus a pair of ensemble pieces, focusing on commissions for the Royal Liverpool Philharmonic Orchestra and Ensemble 10/10, who are the respective performers on the disc.

i think it’s only fair to suggest that Hesketh’s music is an acquired taste, and not because it’s particularly ear- or mind-mangling. On the contrary, one of the characteristics that typifies these five works is their overwhelming clarity, which over time can become a tad relentless, even oppressive. Yet that’s an integral aspect of the multi-faceted charm that is equally typical of this music. When turned in the direction of an archetypal concert-opener, as in A Rhyme for the Season, the orchestral forces are kept firmly in place, embodying the kind of spiky, ants-in-the-pants restlessness that fans of mainstream (i.e. published) British music will find very familiar, yet treated to more than usually enchanting orchestration. Ideas pass at breakneck speed between the sections, and despite its relative functionality, there are some nicely unexpected structural moments that prevent it feeling workaday or staid.

As the disc unfolds, one starts to appreciate on a broader scale the pros and cons of this kind of clarity. In Ein Lichtspiel—a chamber homage to Bauhaus designer László Moholy-Nagy—despite being boistrously episodic and wildly differentiated, melody is central throughout (Hesketh calls it a “restless melodic contour”), and its reinforced treatment seems to neutralise (or at least qualify) the more rambunctious side of the work’s personality. This is potentially even more the case in the orchestral Graven Image, surely one of Hesketh’s most elegant pieces, where clarity is taken to an extreme, melodic lines doubled and tripled, punctuated and spotlighted by an assortment of percussive means. But the work benefits from episodes of nebulosity, and it’s rather satisfying to note that that these passages even defy the recording (which is nonetheless excellent) to capture all of their detail and intricacy. 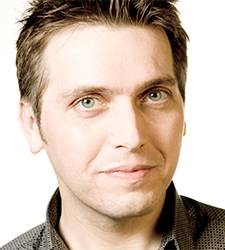 It’s precisely here, when the textures evolve into dense obfuscation—lines bending over and around each other, none overtly predominating—that the endemic mystery of the music is allowed to speak, ironically, most clearly. There’s a distinct leaning towards exotica in much of Ken’s music (personally, it’s the aspect i find most attractive), and it’s easy to lose sight of this amidst the regimented mechanisms and heavily outlined materials that tend to predominate. The disc’s title work,Wunderkammer(konzert), presents what is almost an archetypal illustration of this dilemma in its three movements, the first of which is split between homophonic tuttis—by far the most clear and strong material—and compressed layers of virtuosic polyphony, superficially weaker but so much more fascinating and ultimately demonstrative. The remaining two movements essentially take sides; the second is very exotic, different from everything else on the disc, clarity yielding to an atmosphere rich with uncertainties but sparkling regardless. The third movement is by contrast a damp squib, its rhythmic underpinning making everything feel over-focused, the sonic equivalent of eye-strain.

It’s a testament to the imagination of Ken Hesketh’s writing that, even though there is so much laser-sighted focus in these pieces, they’re usually able to offer significant shades of variation, something heard most excitingly in the final piece on the disc, At God speeded summer’s end, an orchestral work composed back in 2000. Here, there are what i can only describe as bewilderments of utterance that prove nothing less than triumphant. They massively ramp up the drama, turning the work into a convoluted encounter with entirely unexpected turns and contortions, its moments of unrestrained clamour emerging as from nowhere, rather than through smooth evolutions of line. i don’t think it’s inappropriate, despite the scent of solemnity that darkens these moments, to describe Hesketh’s approach in this work as whimsical, and it highlights just how deliciously evocative his music can be when the more obvious kind of clarity is cast aside.