Just over a week ago, the Proms was introduced to a brand new orchestra, the National Youth Orchestra of the United States of America, bringing to an end their inaugural concert tour. Having come via Moscow and St Petersburg with Valery Gergiev at the helm, and with works by Tchaikovsky and Shostakovich featured in the concert, it was perhaps not surprising that composer Sean Shepherd would find Russia a dominating inspirational force. Shepherd’s new work, Magiya (Russian for ‘magic’), seeks to tap into the spirit of (in the composer’s words) “the great tradition of the Russian overture” as well as its narrative impetus, “a specifically Russian sense of magic … in the stories, folklore and literature (old and new) of the country, a kind that often gets no explanation or justification; a ‘normal’, everyday magic”. 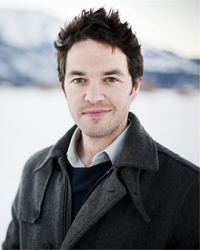 Magiya essentially comprises two ideas, the first of which, announced with brushed accents, is full of urgency from the get go. It’s heavily pulse-driven, dominated by quasi-fanfaric material in the brass, forming chords from overlapping sustained notes. With a minimal amount of toing and froing, this persists for the first third of the work before switching to the second, potentially more melodic idea. It emerges from the upper strings, soft and slow, while the rapid pulse continues beneath; having gained a little pace, the strings yield to lower strings and tuba. Once again, having set up the basics, Shepherd then allows the instruments to continue in essentially undifferentiated vein for several more minutes, the accompaniment limited to chirpy asides, brass guffaws and playful percussive spittoons. It’s nice to hear a tuba given such responsibility, but in this context—despite the formidable best intentions of the player—the poor instrument sounds muddy and unconvincing. Then we’re back at the opening idea again, the fanfaric material develops somewhat, the orchestra attains a state of impressive busyness, but for all the activity there’s not really anything that protrudes or distinguishes itself enough to become interesting. Arguably it ends in the only way it can, with that most commonplace paradox of the contemporary composer’s palette, the unexpected yet all too predictable thud.

If Sean Shepherd had treated the material with a bit more restraint—not just allowing basic ideas to run on and on like bland machines—or thrown in one or two really memorable or even vaguely ear-grabbing bon mots then Magiya might have made for a more engaging experience. As it is, it’s a bloated, irritating creation that vainly puts its faith in incessant friskiness as a substitute for substance. The real talent on display here came entirely from the orchestra; despite the work’s abundant flaws, Magiya is clearly a tough piece to play, but the NYO-USA proved their abilities to be outstanding; an orchestra with a very exciting future.

In anticipation of my new piece for the National Youth Orchestra of the United States of America in its inaugural season and tour with the Russian conductor Valery Gergiev, my thoughts naturally drifted eastwards. In writing a piece to precede two pillars of the Russian repertoire, and to be performed also in cities in Russia, I immediately thought of so much music that I adore in the great tradition of the Russian overture – from those of Glinka’s Ruslan and Lyudmila and Tchaikovsky’s Romeo and Juliet through those of Mussorgsky and Rimsky-Korsakov, and many of the 20th century, including Shostakovich’s Festive Overture. I also find myself drawn to a specifically Russian sense of magic – or magiya – in the stories, folklore and literature (old and new) of the country, a kind that often gets no explanation or justification; a ‘normal’, everyday magic. When these tales find their way to the stage (as, for example, in Rimsky-Korsakov’s The Golden Cockerel and Stravinsky’s Petrushka, some of most colorful and most exotic – and some of my favorite – music of the age is the result.

Magiya is a celebration of a wonderful new orchestra and an exciting tour, and is a humble nod to a brilliant musical tradition.

Thank you once again. I have a question. Do you know why the BBC has been omitting many of the contemporary works (Lachenmann, Matthews, Shepherd, etc) from their TV broadcasts? I am hoping they eventually include them in a future broadcast (there’s one upcoming dedicated to new music), but still, they should have kept the programs in their entirety.

admittedly wasn’t the highlight rep of our tour, and understandably by first listen its fairly matter-of-fact without too much thematic development. The special aspect of this piece to me and others from the orchestra is how Sean spat out these fragments of music and recycled them but not always in the same order, and definitely never copy/paste from their introductions. Always there’s a ‘fifth-business’ either by presence or absence that generates energy straight to the last downbeat. Despite orchestrations that maybe didn’t sound successful (by which I actually argue their value), it was by no means a boring piece to us playing it – and maybe by alternate interpretations an audience wouldn’t find it boring either.