Last Thursday’s Prom saw the world première of a piece that went through no little trial to be completed. While working on Joybox, with only 40 bars remaining to be composed, John McCabe was struck down with a brain tumour; for many people that would be that, for the time being at least, but McCabe rather impressively slogged on through his subsequent period of treatment to ensure the work was ready on time. Quite apart from anything else, kudos. For inspiration, McCabe turned to an experience at an arcade in Japan, “full of slot machines (one-armed bandits) playing widely different musical jingles, all going on simultaneously but independently. Eventually I seemed to perceive a kind of musical structural pattern to the babel of noise, and this gave me the idea for what I hope is an ‘entertainment’ piece”. This first performance was given by the BBC Philharmonic conducted by Juanjo Mena. 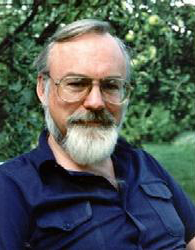 There’s a modicum of fun to be had in Joybox—provided you don’t look too hard or take too seriously what you find. The tiniest of ominous slivers gives way to the work’s principal behaviour, chirpy circling melodies above a restless, irregular pulse, given a boost early on by heavy timp-work. A second melody, presented first by the trumpets, suggests that alongside Japan, McCabe has Stravinsky on his mind; this melody, flat and aloof, essentially directionless in character, comes to dominate the rest of the piece. It’s pivotal to a tutti eruption a couple of minutes later (at which point it seems to abscond, lurking almost upside down deep within the mayhem), and gains more than a few muscles when converted into a brass chorale of sorts, which brings about the work’s true climax. Quickly subsiding into the twin delights of piccolo and tuba, McCabe brings back the opening, restarts the beat—and Joybox comes to end.

Not a deep or particularly memorable work, but then perhaps McCabe has in this respect achieved his aim and created a fitting bit of ‘entertainment’; it’s an enjoyable enough diversion while it lasts.

Joybox was commissioned by the BBC for the 2013 Henry Wood Promenade Concerts, and is a musical souvenir of a trip to Japan a few years ago. I was in Osaka listening with amazement to an ‘entertainment centre’ full of slot machines (one-armed bandits) playing widely different musical jingles, all going on simultaneously but independently. Eventually I seemed to perceive a kind of musical structural pattern to the babel of noise, and this gave me the idea for what I hope is an ‘entertainment’ piece. (I was certainly entertained by the noise emanating from the ‘entertainment centre’). Unlike those of the original, however, my patterns are constantly changing as well as coming together in different ways.

Joybox is dedicated to the memory of Steve Martland.