In previous years, some readers will have noticed that there have always been a few Proms premières about which i haven’t written. Jazz-related works, being somewhat removed from my zone of interest and expertise, are ignored, along with re-discovered works from many decades ago (e.g. Britten’s Elegy for strings, receiving its first performance at the end of this month), contemporary cashings-in of earlier music (e.g. Anthony Payne’s latest ‘effort’, a rehash of Vaughan Williams songs being performed next month) and works by cartoon characters (e.g. the concerto ‘by’ Wallace, heard last year). Beyond these omissions, i’ve never overlooked a work for reasons of quality, as some of my less praiseworthy articles will bear witness. But never have i been more tempted to do this than when confronted by Philip Glass‘s latest contribution to the repertoire, his Symphony No. 10, given its UK première at Wednesday’s late night Prom by the Aurora Orchestra conducted by Nicholas Collon. 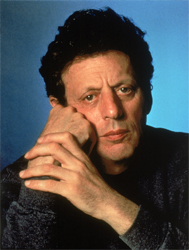 It’s tempting just to throw one’s hands in the air when faced with music of such mindless, adolescent banality, particularly when heard in the context of works by Nancarrow and Zappa, two of the most wildly imaginative, single-mindedly trenchant composers of the twentieth century. Glass’s symphony displays such a lack of rudimentary musical skill that it hardly deserves to be discussed in a forum such as this. In doing so, i don’t want to suggest in any way that the piece warrants validation or undue time and consideration—it absolutely doesn’t. The thirty minutes and five movements of Symphony No. 10 are in every way the kind of thing one would expect from someone in their mid-teens who had recently expressed an interest in composition. It is filled with dull, borrowed ideas (largely obsessed with motifs that rock back and forth), subjected to the most superficial variation (much of it bearing closest resemblance to the padding in film music, in between the main material), borne upon nursery rhyme notions of tonal harmony. To a teenager, one would nod encouragingly with sure confidence and hope that, in due time, they will mature and grow, their horizons expanding exponentially with their imagination. From the 76-year old Glass, we simply have to wonder how the myth that there is something—anything—worthwhile to be gained from spending time with this music has been perpetuated so long. That may be a genuine mystery, but his Symphony No. 10 is nothing of the kind. It is, very simply, contemptible, worthless rubbish. Let’s all move on.

The audio has been removed as a commercial recording is now available. i know, I can’t believe it either.

I’m really enjoying the pussyfootlessness of your Prom reviews so far, but I have to ask: to which “rudimentary musical skills” are you referring?

Hi Ryan, where to begin. In short, a brief examination of any aspect of the work – creation and manipulation of melodic material; rhythmic language; dramatic flow/harmonic direction; structural integrity; orchestrational interplay – to my mind, these are all woefully lacking/defective in this piece.

Thank you for providing this, despite the quality of the music. Sometimes Glass’s music is like a car crash to me: you just can’t help but stare at it. It just seems like a case of someone taking advantage of their fame and stature and just phoning in the rest of their compositional career, at this point.

I have to say, the bullshit tag is a nice touch. And as far as Glass being a cereal, he’s more of a bowl of sugar than Cheerios, bland after the first spoonful and devoid of nutritional value. It’s fine in moderation, and we won’t hate you for liking it, but don’t leave the table without having some greens, son.

If I check something in your silly poll does that mean I love your review or I love Philip Glass’ music?
BTW: If you don’t like his music, go listen to something else. There’s lots of other music in the world.
Also BTW: I love Zappa. My favorite line, “Don’t you eat that yellow snow, don’t go where the Huskies go.”
I had a Malamute at the time I first heard this line.

The subtitle of the poll indicates it’s a response to the music.

I wanted to have a big disagreement with you as I’m not keen on the tone of your review.

(You may not like Philip Glass’ music, but to write off the whole of his career and to claim he lacks ‘rudimentary music skills’ is a little bit silly when you consider his influence over the last 50 years, and the excellent music he has written.)

Okay Oli, i will consider amending my remark to

“…a lack of much beyond rudimentary musical skill…”

but even that feels like a concession too far. i wouldn’t dream of arguing that Glass’ music has been influential, but whether that influence has been particularly beneficial or healthy is far more debatable. The Symphony No. 10 seems to demonstrate just how much of a dead end it really is.

Would you consider this Glass symphony as even worse than the Emily Howard piece from last year?

Interestingly, Chris, i was considering that very question just the other day. Yes i do regard it as worse; Emily Howard’s piece can at least be regarded as a failed experiment, but no-one can accuse her of a lack of effort. Whereas Philip Glass…

I actually thought Glass brought a few new things to the table with his 10th Symphony. It was a little more melodic than some of his other works, and had alot of interesting rhythmic interplay. That said, I did not like those terrible scales and pauses at the end of the 5th movement.
Glass is doing the same thing he’s been doing most of his life because it’s what sounds good to him. To expect him to write something new and profound every time he premiers a work would be ridiculous.
Glass’ music is not meant to be heard with technical,analytical, “Grad-School music theory ears”. It is best to just open your mind and get lost in the sound without worrying about it’s structures and harmonies, ETC,..
Music can be effective without being complex.

This is a very muddled response; you claim Glass has done “new” things, but then stress how he’s doing exactly what he’s always done. There is nothing remotely ‘new’ about this piece; it is a literal waste of everyone’s time. To respond to your points, is it, in fact, ridiculous to demand something new & profound from our composers? & if so, why? Do we not look to most artists for precisely these things?

Your last two remarks are just tired rehashings of decade-old excuses for this kind of music, attempts to divert attention away from the music itself by laying spurious blame on listeners. Believe me, i have no difficulty whatsoever with “opening my mind & getting lost in sound”; i just choose not to switch off my brain & assume the mindset of an imbecile when i do so. Quite how complexity figures in this i’m not sure; it depends entirely what you imply by the term, & in any case, all music is complex (more complex than we realise anyway), so i’ve no idea what point you’re trying to make there.

At one point in the first movement I thought I’d tuned into the opening credits of Fort Boyard.

I am not anti-Glass as I think some of his early music is very effective and has had a positive influence. What concerns me is that even Glass (by his own admission in an interview) finds it hard to tell his pieces apart. I once heard him in an interview completely forget about a concerto he had written the year before. I think he has been resting on his laurels too long and need to recapture some of his earlier creativity. Is the fact that he has written 10 symphonies in 21 years suggestive that he finds this too easy?