It’s interesting to be considering the next Proms première in the wake of having seen, last night, Bollywood’s latest blockbuster offering, Chennai Express. Bollywood’s glory—and at its best, that is definitely the right word—is in its uniquely convoluted appropriation and reinvention of western tropes, served in a form that, to western eyes, is as charming as it is (at times) utterly bewildering and comic. Its supreme success and effectiveness are surely due to the fact that it is the best kind of cultural fusion, built upon twin—and, more importantly, equal—foundations. A benchmark worth bearing in mind when turning to The Gate of the Moon (Sitar Concerto No. 1), the new vehicle for renowned sitarist Nishat Khan, performed on Monday by him with the BBC National Orchestra of Wales conducted by David Atherton. Immediately, it must be stressed that to describe this piece as being ‘by’ Nishat Khan is to bend the truth intolerably. Welsh composer and music therapist Pete Stacey was commissioned by the BBC to “develop and orchestrate” Khan’s ideas, as Stacey explains: “As well as our meetings I would receive recordings. These were the melodies that Nishat wanted to use, and I spent many months developing these single lines into full orchestral pieces.” As collaborations go, looking at the concerto as a whole, Stacey’s contribution arguably outweighs that of Khan, which makes it all the more disingenuous that Stacey’s name should be entirely absent from all of the Proms’ promotional materials. Having said that, perhaps it’s all to to the good, as The Gate of the Moon is a work far more worthy of blame than praise. 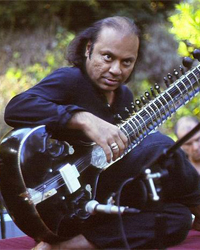 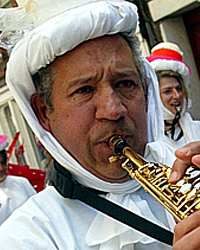 Towards the end of the piece there is a magical episode featuring some lovely contrapuntal asides; meditative, nicely ambiguous, they are the only non-grounded moments in the entire 50-minute duration of The Gate of the Moon. In hindsight, this only makes the preceding 40+ minutes all the more maddening than they already are. There’s very little of what one can meaningfully call ‘fusion’ in the piece, as Khan and Stacey have chosen simply to emulate the brand of cyclic, over-long minimalism inflicted most relentlessly by Philip Glass. Don’t be fooled by the myth that there’s some boy-meets-girl programmatic notion at play within the work’s various sections; neither is it perceptible nor is any meaningful attempt made even to allude to it. What we are given is five or so lengthy slabs of the most anodyne, vapid, boiler plate minimalism; these slabs don’t so much progress as engage in a form of Brownian motion, large portions of which lack any kind of instrumental focus, something of a liability considering this is supposed to be a concerto. Apropos of which: the sitar-writing is as idiomatic as one would expect from one of the world’s great sitarists, but Khan’s solo part inhabits a very tenuous relationship with the orchestra, usually at one of two extremes, either seeming to lack any connection at all (both in terms of style and material) or attempting to forge links through elementary patterns of call and response. Khan opts for a Mozartian approach—the soloist keeping at bay at first, in order that their entry should be all the more dramatic—but sometimes, as in the second movement, this actively derails the orchestral material (impressive, considering how stuck in a rut it is); elsewhere, it usually just underlines how distant the soloist and orchestra really are from each other. Beyond this, one can forgive the cheesey tunes—Bollywood demands nothing less—but that’s as close as The Gate of the Moon gets to any serious Asian connection.

Near the end of Quentin Tarantino’s second Kill Bill film, the character of Bill delivers an insightful monologue concerning Superman’s relationship with human culture: “Clark Kent is how Superman views us. And what are the characteristics of Clark Kent? He’s weak… He’s unsure of himself… He’s a coward. Clark Kent is Superman’s critique on the whole human race.” If The Gate of the Moon is Nishat Khan and Pete Stacey’s in-a-nutshell view of western music—repetitive, undemanding, simple, yearning only to be liked—it’s difficult not to be a little offended.

Nishat Khan/Pete Stacey - The Gate of the Moon (Sitar Concerto No. 1)

[…] in the season. Twice recently we have been presented by works from composers of Indian descent (Nishat Khan & Naresh Sohal), works seeking at least in part to acknowledge the disjunct traditions of east […]