All good things etc., and this year it fell to composer Anna Clyne—and the BBC Symphony Orchestra, conducted by Marin Alsop—to get underway the biggest party-masquerading-as-a-concert of them all, the Last Night of the Proms. In calling her short work Masquerade, Clyne is presumably alluding chiefly to the carnival atmosphere of a masquerade ball, an atmosphere to which her music went some way to living up to. 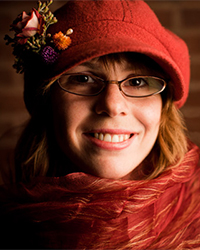 In any other context, one might hold out for a little depth and provocation, but such noble concepts haven’t been a part of the Last Night’s shenanigans for many years, so it wasn’t surprising in the least that Clyne fell in line with the entire raison d’être of the occasion, and sought to please the crowd. What she delivered was five minutes that effectively mashed up ballroom styles and soundtrack clichés with a mild dose of sonic amphetamine to give it some extra pep. At the start of the piece this results in a rather deliciously queasy delivery from the strings, presenting snatches of melody in between mad, scrambling tumbles and slides. As for the rest, what is there to say about such a musical cheese fondue as this? It was big, it swept and romped, it was cosmetic, bland and predictable yet equally it was both entertaining and mercifully concise. Great music, destined to last? No way! An ideal way to start the Last Night of the Proms? Definitely.

Which brings us, with lashings of Hollywood gloss, to the end of another Proms season. Not, by my reckoning, one of the best of recent years—not by a long chalk—yet with one or two gems that will surely become major contributions to the repertoire. Thanks to all of you who have commented and voted in the polls for each première; i’ll be keeping the polls open for the next fortnight, so if you haven’t yet voted, head over to the Proms 2013 polls page. My final reflections will accompany the results in a couple of weeks.