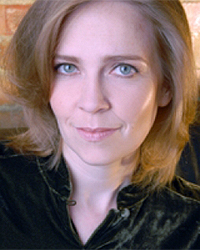 Next in my Lent Series is a piece by a composer whose work i’ve encountered precisely once. Born in 1970, Alison Kay‘s studies took her from the Royal Scottish Academy of Music and Drama to the Royal College of Music to the Guildhall School of Music and Drama and finally to Sussex University; since 2004 she’s been back at the RCM in a teaching capacity. Beyond this, neither i nor, it seems, the internet, knows much about Kay or her music, save for a short piece included on a 2001 NMC release, and this instructive quotational nugget:

I enjoy the physicality of music. In composition, the potential to craft and shape structures from the most intimate timbral nuance to the most intense, dramatic structural gesture opens endless possibilities. I try to create visceral, three-dimensional music that has the potential to encompass exciting rhythmical impetus, rich timbral and harmonic language, textural shapes and surfaces, and a sense of varying movement and weight through time. I always start from the perspective of the physical properties of instruments and performance spaces. I see the interpretation of my music by performers and listeners as an integral part of the compositional process.

If her 2006 work Flux is anything to go by, such a paucity of information and/or recordings is something of a shame. Comprising a quintet of players—flute doubling piccolo, bass clarinet, piano, violin and cello), Flux is an entertaining and curious piece, with considerable lyrical scope and, as the implications of its title play out, no little drama. It begins almost reluctantly, in a delicate series of restrained melodic tendrils that seem to be looking for purchase, briefly given some weight from the piano—and then the jump-cuts begin. There’s a sudden breakout into a triple meter gallop, boisterous and jumpy, those opening tendrils now emerging as a strong unison melody, whereupon the music breaks, led by the cello through murky and somewhat indistinct territory. The flute, joining in, provides some clarity, while the bass clarinet grumbles far beneath, a friction that ends up put on one side as the ensemble falls into repeating minimal patterns. Again, Kay slows and separates the music, reintroducing the players one at a time beginning with the piano, building to the work’s lyrical high point. Another episodic lurch abruptly restores the pace, clarinet and piano teaming up to launch a bullish onslaught that, in keeping with the work’s modus operandi, swiftly gets brushed aside and replaced with Flux‘s closing melodic gambit, a gruff and rather harsh collection of unison phrases. Perceptible in the gaps between them is a soft, wavering note, and it’s this that forms the basis for the work’s coda. Akin to the opening, soft, soloistic tendrils are offered before the ensemble closes on a tremulous final unison.

One of the things that works so well in Flux is its marked inner consistency despite the wild, constant shifts in temperament and tempo. Far from schizophrenic, they come across rather as brisk progressions through a series of discrete but interconnected trains of thought. Kay’s writing is entirely conventional, but highly effective; there’s a superb sense of balance and many’s the time it sounds as though far more than just five instruments are playing. If Flux is typical of Kay’s music, it would be good to hear more.

Flux was commissioned by the New Music Players and the world première, which took place in November 2006, was given by them under the direction of Roger Montgomery.