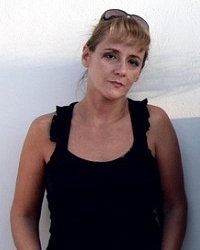 Back to my Lent Series, and a rather beautiful work for voice and electronics by the Romanian composer Ana-Maria Avram. Also a pianist and conductor, Avram was born and studied in Bucharest, before moving to the Sorbonne in Paris to pursue a PhD in Musical Aesthetics. Avram directs the Hyperion Ensemble with her husband Iancu Dumitrescu, and together they promote themselves as composers of ‘hyper-spectral’ music, an extension of spectralism encompassing aspects other than just the harmonic, such as timbre and dynamics, and which is particularly interested in how sound operates within the live performance environment. She works extensively with electronics, and her compositional interests can be heard to good effect in her 1998 work Nouvel Archae for “computer-assisted” voice.

The work explores further the approach taken in Avram’s earlier work Archae (1992), the voice being subject to continual transformation. Here, that transformation is extended by the computer, resulting in what Avram calls “a trip through different musical cultures”. This trip has its point of departure in an abyssal miasmic murmuring, above which the voice utters high pitched animalistic calls, echoed by the computer. A lovely shimmering cluster emerges from this, formed from lines overlapping each other within a narrow pitch band; the inner movement is practically writhing with detail, but is kept firmly in place before descending into a lengthy passage similar to the opening, low and indistinct. Following some glancing sibillants the voice reappears, first with open vowel sounds, then ostensibly forming words, growing in intensity towards a brief energetic outburst that settles into a static drone. Further vocal sounds obtrude and become assimilated into the drone, widening its pitch focus and boosting its energy, particularly in the bass register, which acquires real muscle. This dense polyphony yields to shifting groans, and although an isolated outburst threatens stability, it’s quickly forgotten as the electronics assert themselves in a more powerful drone that swallows up the voice entirely. The nature of this drone—deep, profound, coloured with soft vocal tics and whistled overtones—is exquisite, heavily redolent of The Hafler Trio, persisting as an extended period of ecstasy, the music seemingly floating within a viscous fluid. As it finally ebbs, the piece dissipates in whispers, trills and exhalations.

This mesmerising performance of the piece was given by Ana-Maria Avram herself at last year’s Tectonics festival in Glasgow.

[…] and a curiously strange concerto by Romanian composer Iancu Dumitrescu (husband of Ana-Maria Avram, featured on 5:4 last year). Particularly well-known (and self-described) as a composer with ‘spectralist’ […]