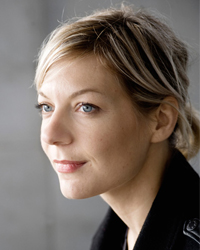 The next piece in my Lent Series is by German composer Brigitta Muntendorf, based in Cologne. Muntendorf’s work is heavily characterised by overt theatricality; three years ago, in Salzburg, Muntendorf premièred her first music theatre work Wer zum Teufel ist Gerty (YouTube), followed last year by Endlich Opfer, more substantial but nonetheless described by the composer as a “pocket opera”. In between the two, Muntendorf composed a remarkable electroacoustic piece for voice, mono loudspeaker and ensemble of eight players titled Sweetheart, Goodbye!. Her starting point was a chapter from James Joyce’s Ulysses, not so much ‘set’ as dramatised—the score specifies that the ideal vocalist would be “an actress with vocal training” rather than a singer—a process Muntendorf likens to “playing with emotions as material”.

The astonishingly vivid dramatic nature of Sweetheart, Goodbye! tempts one almost not even to hear it as a piece of music at all, but rather some kind of heavily stylised abstract scena, somewhere outside either music or theatre. In such a heightened context, Joyce’s words—here translated mostly into German, with occasional asides in English—become a highly-charged tangle of confusing emotions, possibly a soliloquy, possibly an obloquy (maybe both), delivered with an unsettling but irresistible combination of erotic potency and brutalist aggression. The loudspeaker effectively operates to expand the voice, being the output for a series of 60 samples triggered by the vocalist via foot pedal, samples that anticipate, emphasise and elongate the main vocal line. This expansion is greatly extended by the ensemble, which acts throughout to reinforce and even fetishize both the general tone and the minutiae of the vocal part, their material frequently consisting of bursts of sibilance, growling surges, in- and exhalations, tongue rolls and percussive bangs and taps. These are very far from the usual knocks and scrapes one hears too often in new music, however; Muntendorf’s palette is an uncommonly imaginative kaleidoscope encompassing the most guttural and ethereal extremes, including such diverse things as scolding noises (“as if you wag your finger at someone”), an assortment of trombone sounds including pinched squeals, slapped tongue pedal notes and a split tone (which “sounds like a bombastic fluttertongue or like a jackhammer”), a cardboard box dragged over the bass drum head (a wonderfully striking effect), a wineglass placed on piano strings, not to mention the use of (ahem) a “small vibrator with/without a napkin”, also used on the piano strings to cause a buzzing percussive rattle. Sweetheart, Goodbye! is emphatically not a piece about effects, though; every moment of it is all about the words, somehow both full and absent of meaning, yet always devastatingly direct.