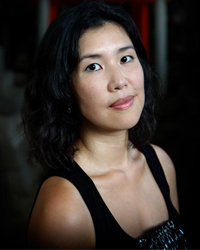 Back to the Lent Series, and a work by the Japanese composer Misato Mochizuki. Mochizuki’s compositional outlook encompasses both east and west, perhaps a by-product of periods of study in Tokyo and Paris (at IRCAM, where she studied with Tristan Murail). For the last five years, Mochizuki has taught at Meiji Gakuin University in Tokyo, but her work continues to be performed regularly in France. She’s a bit of an unknown quantity in the UK, but that situation may improve with the release a few days ago of a new CD of her music on the NEOS label. Meanwhile, here’s a highly effective, slow-burning orchestral work of Mochizuki’s, performed at last year’s Total Immersion day celebrating contemporary Japanese music.

Arguably the most striking aspect of Musubi is its patience; minutes go by during which the texture and overall sense of direction feel essentially unchanged. Yet throughout those minutes, a myriad instances of evolution are taking place on the surface of the music. The gently hypnotic effect of this initially leads to a kind of confusion of detail, which only passes very gradually, as instruments start to coalesce and eventually unite their gestures. Nonetheless, Mochizuki keeps everything immensely static, glazing over the emerging clarity and rendering it like the peaks and troughs of waves on the sea. Things are going to change, though, and hints of this begin almost imperceptibly long beforehand; rapid patterns on a suspended cymbal can be heard from somewhere (barely audible in the swells that surround it), reinforced shortly after by a huge drop in dynamic and a soft drum distantly joining in. These are portents for the sudden appearance of a decidedly chirpy melody sounding as though it’s emerging from a tin whistle, falling into the background as the brass assume centre stage, growing in power. The first climax ensues, an eruption from the strings with some pointed bass drum thwacks—but once again Mochizuki pulls everything back, reducing the rhythmic complexity and instigating a repetitive accelerating sequence. This seems to peter out, but turns on its heels, leading to an almost tribal outburst, heralded and driven on by the percussion and brass. The latter stumble into a Stravinsky-like episode of off-kilter regularity, carried along on hectic toms and pizzicato strings, arriving on a sustained chord which ends with a rather delightful little fizzle.

This performance of the UK première was given by the BBC Symphony Orchestra conducted by Kazushi Ono.