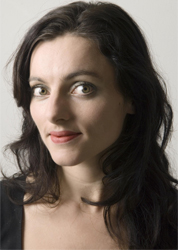 Today is the final day of Lent, so it’s time to draw my series focusing on music by women composers to a close. As it’s Easter Eve, the time associated with the great late-night vigil, i can’t think of a more appropriate piece with which to end the Lent Series than Crepuscular Hour by the Norwegian composer Maja S K Ratkje. Originally completed in 2010, the work—which, as the name suggests, lasts a full hour—is intended to be performed in a large, resonant space, such as a cathedral, with the musicians surrounding the audience. These musicians, comprising three choirs, three pairs of noise musicians and a church organ, fill the environment with sound that works both to evoke the effect of crepuscular rays (strong shafts of sunlight emerging from cloud, typically seen at dawn and dusk) and also to transport the audience on a form of meditative journey. The structure of a composition, after all, is not that dissimilar from that of a liturgy, and Crepuscular Hour is in essence an abstract liturgical act, one that doesn’t so much impel meaning on the faithful as provide stimuli and a framework for our own individualised meditations.

On the one hand, Crepuscular Hour contains the same kind of filigree detail that one expects from such a fervently imaginative composer as Ratkje. Yet, as is so often the case with large-scale works, the outlook is more broad, the compositional approach more sweeping and generalised. Ratkje presents a continuum of sorts, that has at one pole clarity and pitch focus, from the choirs, and at the other sounds that are abstruse and hard-edged, emanating from the noise musicians; the organ, used sparingly and subtly for most of the work, finds itself at both ends. The music begins by establishing this stark polarisation, but goes on to develop it in multitudinous ways, moving freely along the continuum and frequently obfuscating its current nature. Perspective is used a lot; noise, for example, is regularly positioned at a distance, only to encroach with increasing vigour on the singers; and in the choir, too, Ratkje often teases out of the choral mass individual voices for specific treatment or emphasis. Words sporadically can be heard—clearly towards the start (referring, appropriately, to the “subject of chaos”), barely towards the end—but for the most part the choir acts by forming and reforming its shape and harmonic angle. Whether or not this is in response to the machinations of the noise depends whether one wishes to hear a kind of conflict at play; but either way, the very existence of such a polarised sonic continuum implies, if nothing else, friction, and it is upon the rising crests of this aesthetic jarring that the piece and the audience are carried along. On several occasions, Ratkje reaches a point of extreme density, and now steps back, allowing it to continue for many minutes. These are very intense episodes, not overwhelming as such but certainly enveloping. Around two thirds of the way through, Ratkje introduces a new polarisation, initiated by fixing the piece above a drone; as it intensifies, the organ suddenly lets rip with its opposite, a massive cluster that subsumes musicians and audience alike like a tidal wave. Now, at its zenith, Crepuscular Hour does finally overwhelm, becoming an unstoppable force of raw, elemental energy. It’s easy only to associate the numinous with that which is implied or unheard, but there’s something distinctly ‘other’ to be found in such an ecstatic overload as this (which continues for over 10 minutes). A barely perceptible increase in clarity from the choir triggers release from the organ, exposing the drone again (drowned out, maybe, but not quenched) and the choir’s fading sounds.

Maja S K Ratkje’s multifaceted work can appear to be the result of an impish, perhaps quixotic creative mind, but Crepuscular Hour proves otherwise, demonstrating remarkable depth and profundity in a unique engagement with notions of meditation and the dramaturgical potential of music. Listen to it late at night, and as loud as you dare.

Crepuscular Hour is a one hour long piece to be performed in a cathedral or similar with musicians surrounding the audience. The piece is written for three choirs, three pairs of noise musicians and church organ. The room will be filled with sound in an intense, but almost meditative hour, where the voices blend with the distortion, the noise sometimes taking over, and the organ eventually hoisting the music to new dramaturgic level.

The piece is inspired by the phenomena ‘crepuscular rays’, which is when rays of sunlight stream from one point through gaps in clouds or other obstacles. The name comes from their frequent occurrences during the ‘crepuscular hours’ (Crepuscular comes from the Latin word “crepusculum”, meaning twilight), when the contrasts between light and dark are most obvious. The visual design of this concert is a play on the phenomena, as I want the light to be filtered by the obstacles and musicians in the room.

‘Crepuscular’ is also a term used to describe creatures that are primarily active during twilight, that is at dusk or dawn.

Just a quick note of thanks to say how thoroughly I’ve enjoyed this Lenten series. The Ratkje, in particular, I regret having missed in performance given that the centre of Huddersfield is a mere 15-minute drive away for me! Curiously enough, the piece it reminded me most of, in terms of atmosphere created rather than language(s) employed, and presumably because of the similar “subject-matter”, was David Bedford’s “Twelve Hours of Sunset”.

thanks, maja is an interesting genre-spanning artist, and any chance to hear her compositions is most appreciated.

Wow! I am really enjoying this! Thanks for sharing!