Blasts from the Past: György Ligeti – Poème symphonique 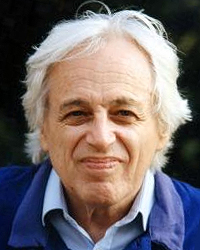 A couple of days ago marked the eighth anniversary of the death of Hungarian composer György Ligeti. To mark the event, and also begin a new occasional series on 5:4, i’d like to take a brief look back at one of the more enigmatic works of Ligeti’s career. Poème symphonique was composed in 1962, and is as much a piece of performance art as a musical composition. The performance specification is relatively straightforward: 100 mechanical metronomes are required, operated by 10 players, each metronome fully wound and set to its own tempo; all 100 are then released and allowed to tick freely until their mechanisms wind down. and that’s it, except your problems begin immediately, procuring and assembling 100 metronomes at one time and place being the most obvious. Not entirely surprisingly, the first performance triggered a fair amount of controversy, being as it was part of an official reception at the closing event of the 1963 Gaudeamus Courses and Concerts of New Music, in Hilversum, the Netherlands, an event involving local dignitaries and which was to be televised the following day. During the performance, protests broke out, and the broadcast never took place.

The piece is another example of a recurring theme in Ligeti’s work, that of multiple, very similar lines moving not quite at the same speed, creating a dense mass of material where the overall effect—of a texture with a particular kind of intrinsic behaviour and timbral quality—is of greater importance than the individual lines that comprise it. Ligeti often resorted to concentric tuplet relationships to achieve this effect, as seen in this short excerpt from his orchestral work Atmosphères, composed the previous year (click to enlarge). 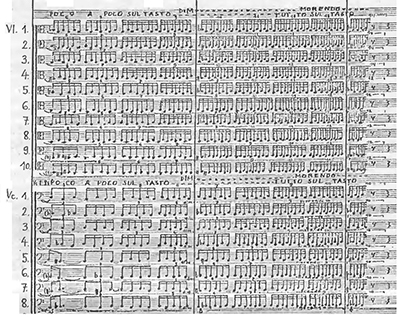 This approach involves a predictable kind of periodicity, as each instrument is rhythmically united at the start of each bar, but in Poème symphonique, the unique mechanical nature of each metronome’s internal mechanism slowly winding down, plus the inherent inaccuracies in any mechanical system, results in a fascinating indeterminate synchronicity. Initially, the effect of 100 metronomes ticking their respective—&, if the players have done their job well, unique—tempi is an overwhelmingly dense morass of impacts, not dissimilar from the noise of a hailstorm or the interior of an ant-hill (trust me). However, this flat wall of noise gradually becomes shaped and punctuated by gaps in the texture and clusters of ticks accumulating at one point (together sounding like the irregular cranking of a ratchet). The random way this plays out is what makes Poème symphonique such a hypnotically engaging piece, and with its entropic nature one can hear it as a sonic representation of any number of scientific phenomena, including one of the postulated ultimate ends of the universe. One could even make a fanciful leap and hear the work as a wry comment (coming from a Hungarian Jew who barely survived the Second World War) on how all doggedly mechanistic systems, one day, fall apart. Or one can simply hear it on its own terms, a frankly rather ludicrous assemblage of rhythmic complexities that repeatedly invite and then thwart all and any attempts to get into its groove. Take your pick.

This rare performance of the piece took place at the start of a concert given by the London Sinfonietta during the 2012 Proms season.

I should add as well that it is amazing to watch as I saw it once performed by the LS at the Sydney Opera House and was mesmerised by the way that the tiny waving arms made “mexican wave” movements across the podium. I was also amused by how quiet the piece is. It’s actually like looking at grass blown by the wind. It confirmed my thought that Ligeti is probably one of the most multifaceted composers of the 20th Century.