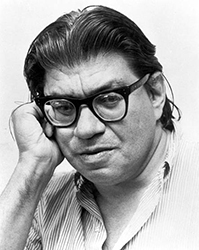 One of the most beguiling and enigmatic premières i’ve encountered in recent times took place at Birmingham’s Frontiers Festival in March, heard for the first time outside the USA no fewer than 54 years after its composition. There doesn’t seem to be any good reason for this considerable feat of procrastination; Morton Feldman‘s The Swallows of Salangan lasts a mere nine minutes, and even though the instrumentation is unusual—a chorus, plus 5 flutes (4 regular, 1 alto), 5 trumpets, 2 tubas, 2 pianos, 2 vibraphones and 7 cellos—it’s not something that would tax any established ensemble or orchestra. There must be another reason for such lackadaisicality, and one can’t help wondering whether it has more than a little to do with the nature of the music itself; i described it ‘beguiling and enigmatic’, but there’s equally a kind of aloof impenetrability that one can imagine many listeners might find not merely unappealing but downright off-putting. Yet if knees can be convinced to bend rather than jerk, there are—as always with Feldman—strange and unfamiliar rewards aplenty to be found.

The Swallows of Salangan, composed in 1960, is one of Feldman’s works rooted in indeterminacy. Put simply, the performers all begin together (the opening downbeat being the sole act required of the, ahem, ‘conductor’) after which they progress at their own pace through their respective parts, which contain only pitch information, nothing rhythmic. Of course, this doesn’t mean that anything goes, and indeed the score includes various passages that may or may not be construed as suggestions or even clues to Feldman’s conception of the performance, including an occasion where a B-flat-G progression occurs throughout nearly all the parts. Furthermore, the balance between the work’s overall diatonic quality and the many chromatic incursions into it is something which arguably needs forethought as well as a moment by moment sensitivity to how each subsequent pitch is going to affect or colour the rest of the music when it sounds. In this sense, the players, despite first appearances, are by no means individuated but exist in a curious kind of indeterminate connectivity (as such, Peter Dickinson’s description of this approach as “racecourse design” can be immediately dismissed as it entirely fails to appreciate this aspect). A hint of this interconnectedness of the performers is found at the end of the quotation Feldman places in the score (and from which the title comes), taken from Boris Pasternak’s essay ‘Safe Conduct’:

I loved the living essence of historical symbolism, or, putting it another way, that instinct with the help of which we like Salangan swallows, built the world – an enormous nest, put together from the earth and sky, life and death, and two times, the ready to hand and the defaulting. I understood that it was prevented from crumbling by the strength of its links, consisting in the transparent figurativeness of all its parts.

The result is music positioned at the tipping point of homogeneity, the performers appearing all to be working toward the same end (and in the same essential direction), only a moment later to be challenging and undermining that assumption, seemingly going their own way. Feldman felt that by “decontrolling” musical elements, the very elements used by composers to establish a sense of unity, one was able to tap into something fundamental (one might even call it immanent), that could ultimately establish a new kind of unity.

As controls are given up, one finds that these elements lose their initial inherent identity. But it is just because of this identity that these elements can be unified within the composition. Without this identity there can be no unification. It follows then, that an indeterminate music can lead only to catastrophe. This catastrophe we allowed to take place. Behind it was sound — which unified everything. Only by “unfixing” the elements traditionally used to construct a piece of music could the sounds exist in themselves — not as symbols, or memories which were memories of other music to begin with. (from Feldman’s short essay ‘Predeterminate/Indeterminate’)

Coloured by an ever-shifting palette, governed by a dynamic range that is unwaveringly gentle, and where activity and stasis seemingly happen simultaneously, The Swallows of Salangan offers profound insights into how music can be composed, performed and heard. Call that experience ‘mystical’ if you like; it is, at the very least, downright revelatory.

The European première was given by Birmingham Conservatoire’s Thallein Ensemble with Via Nova; no less a figure than Howard Skempton provided the all-important downbeat.

Fascinating. The early, aleatory works may not be what Feldman is chiefly remembered for nowadays, but they were clearly highly influential at the time. Leif Segerstam, for one, has carved an entire compositional career out of variations on the approach adopted here…although a cynic might add that the latter’s motivation has been at least in part the desire to be able to say he’s written more symphonies than anyone else…

[…] lucky to do some very exciting performances, including the UK premiere of Morton Feldman’s Swallows of Salangan, which was broadcast on BBC Radio 3. We’ve also worked a great deal with Conservatoire […]