In terms of volume, the Last Night of the Proms ensures the festival ends with a bang rather than a whimper. In terms of musical imagination, originality, provocation and insight, however, the reverse has long been the case, and the event today does little more than put the shit in shitfaced. It’s hardly surprising, then, that the premières commissioned to jump-start this party-cum-concert have for the most part become little more than functional bursts of effervescent froth, limp spurts of aural ejaculate that seek to tick the box of contemporary relevance before sagging back into its usual back-slapping melée of moribundity. 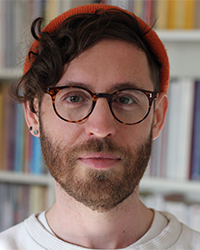 Having admired his work for a while (and written about it on several occasions), i expected this year to be different—it’s therefore surprising and deeply disheartening to hear Gavin Higgins acquiescing quite so readily in his work Velocity, premièred last night by the BBC Symphony Orchestra conducted by Sakari Oramo. Hectic, motivic textures on cruise control with some solid lyrical asides form the general thrust of the piece; nothing inherently wrong with that, but the material is cheap and Faberian, especially the textbook angular melodies with woodwind pointing; towards its conclusion it even threatens to cross the line into full-on ersatz Knussen, but thankfully, Higgins at least knows better than that. There’s not really the slenderest of whiffs of substance in Velocity, yet if all you’re after is a quick, meaningless fumble for a few minutes, you’ll be easily satisfied.

And, on that dampest of squibs, the Proms 2014 comes to an end once again. Personally, i’ve found this year’s round of new works to be, on the whole, disappointing, with many of the premières ploughing predictable, over-familiar furrows to ineffectual (and sometimes pretentious) ends. Yet again, the role of electronics within contemporary classical music has been almost entirely ignored (Brett Dean’s Electric Preludes was a superb and subtle exception), and the inclusion of only two premières from women composers is nothing short of a disgrace. The Proms has multifarious priorities, of course, but from the perspective of new music they still come across as an aged outsider trying to feign interest for the sake of appearances (the BBC’s blundering approach to cutting contemporary works from the TV broadcasts only reinforces that impression). All the same, the highlights of this year’s festival—from Simon Holt, Brett Dean, Haukur Tómasson, Jukka Tiensuu and Jörg Widmann—were hugely impressive, demonstrating skill and brilliance on a daunting scale.

If you haven’t already, head over to the Proms 2014 polls page to express your views about each of the 21 premières. As usual, i’ll keep the polls open for the next two weeks, after which i’ll examine and summarise how you all voted.