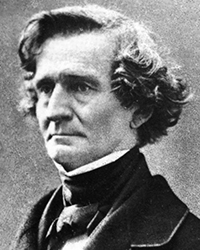 Today’s work in my ongoing series on the subject of death is not contemporary, not in the least, but is one which nonetheless still sounds as vital and as daring as it did when it was premièred 177 years ago. The Grande messe des morts was Hector Berlioz‘s epic response to a commission to write a setting of the requiem mass in commemoration of soldiers who had perished in the 1830 French Revolution. Despite being only his fifth published work, the key word in its title is ‘grande’, as it utilises forces on a scale unprecedented in 1837 and almost never equalled since. Berlioz’s orchestral line-up is huge enough by itself, including 8 bassoons, 12 horns, 16 timpani, 10 cymbals, 4 tamtams, and a string section of 108, but this is expanded further with four separate off-stage brass brands (38 extra players) distributed around the performance space; the addition of a choir numbering at least 200 makes for an assembly of performers rather mind-boggling to imagine. And imagine is what most people have to do with this piece; i was fortunate to experience a performance in The Hague many years ago, but for obvious reasons the Grande messe des morts for the most part remains an under-performed curiosity, famous more for its gargantuan size than for the music itself.

Which is a great injustice, as the Grande messe des morts, composed in just three months, contains not only some of the best music Berlioz ever wrote, but constitutes one of the most brilliantly effective and radically imaginative settings of the requiem ever written. The ten sections are highly variegated. Berlioz combines the Introitus and Kyrie into a single extended movement, and it’s clear from the outset that, despite amassing such forces, Berlioz is determined to exercise immense restraint over them, saving their potential for key structural points. Lyrical melancholy is just as important here as sheer sonic might, and this opening movement is exquisite in this respect, an interesting blend of lament and optimism, the choir at times surging beneath the word ‘requiem’ as though their own lives depended on the eternal rest of the departed. Berlioz was more capable than most of writing incredibly tender material, and this is what permeates the Kyrie, the orchestra falling silent as the choir falteringly slides over descending lines, like mournful sighs. Other sections explore similarly subdued music; the third and fifth movements, Quid sum miser and Quærens me are obvious examples, both extremely quiet; the former for the most part features only a cor anglais and the lower strings from the orchestra, responding to the choir’s halting phrases (there’s a strong sense of fear at this point, entirely appropriate considering the self-deprecating text) while the latter is for choir alone, in some ways even more withdrawn but with a demonstrably more optimistic tone. The eighth movement, Hostias, returns to fragmenting the choir’s delivery (a trait of the work as a whole), and makes the effect more uncanny by punctuating them with the strange sound of three flutes and eight trombones playing a swelling chord of very high and low pedal notes. For a long time this was cited in orchestration text books (including Berlioz’s own), although usually as an example of idiosyncracy gone too far: both Cecil Forsyth and Gordon Jacob chose to dismiss this passage (Forsyth, who hadn’t heard the piece: “it probably sounds very nasty”; Jacob, who had: “it does”), though today it’s more readily recognised as the flash of ingenuity that it clearly is, creating a very weird, otherworldly atmosphere.

I spoke of lyricism before, and the high points of this are to be found in the seventh and ninth movements. The Offertorium is almost like a challenge from Berlioz to himself, confining the choir to just two notes, oscillating back and forth between A and B-flat. For around 10 minutes the orchestra explores a fugal territory with assorted harmonic twists and turns, with the effect that the choir’s pair of notes keep shifting in their relation to the current underlying tonality. The dissonances that arise are often strikingly acute, reinforcing the sense of pleading expressed in the words, imploring God to “liberate the souls of the faithful departed from the pains of hell and the bottomless pit”. It’s extraordinarily beautiful music, an odd mixture of high romanticism in the orchestra and austere sobriety in the choir that speaks volumes about the mixed feelings that abound when reflecting on the dead. The Sanctus offers not so much a glimpse as a widescreen technicolor vista of heaven; a solo tenor leading the choir in an ecstatic outpouring that’s the aural equivalent of Dante’s Paradiso. These passages are answered, twice, by an extended ‘Hallelujah’ fugue, sequences where melancholy is utterly forgotten, the music rapturously lost in joy and wonderment.

But it’s the two movements that unleash the full force of all the performers that unavoidably make the most overwhelming impression. In the Dies Irae, Berlioz establishes a volatile environment where each successive passage ramps up the tension of the preceding one, leading to the renowned Tuba Mirum, where, following a surround sound fanfare from the offstage brass bands, you finally get to hear what all those timpani, cymbals and tamtams sound like, Berlioz using the timpani to play chords in music that doesn’t so much herald the last judgement as practically embody it, subsuming and almost drowning out the choir (after the first such onslaught, when they softly sing ‘Mors stupebit et natura’ – “Death and nature will be astounded” – you don’t half believe them). By contrast, the Rex Tremendæ uses the full orchestra in a whirling celebratory dance, seeking to capture the immensity of the “King of tremendous majesty”. The effect is like the preliminaries before the world’s largest coronation, although Berlioz’s regular soft asides at the words “salva me” are all the more deeply poignant for being in the midst of such a vast context as this. The final movement, Agnus Dei, also uses all the assembled performers, but now the emphasis is more on colouration than scale, the music revisiting and reflecting on assorted passages from earlier movements, closing in a haze (or should that be daze?) of profound peace.

This performance took place during the 2012 Proms season, given by the combined forces of the BBC National Chorus of Wales, the Huddersfield Choral Society and the London Symphony Chorus with tenor Toby Spence and the BBC National Orchestra of Wales, all conducted by Thierry Fischer. In places it’s a somewhat mannered performance (and the Offertorium is way too slow, taken at ♩=60 instead of 84!) but it nonetheless lives up very well to Berlioz’s enormous demands, and the combined choral forces sound marvellous throughout.