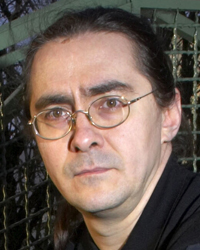 One of my personal highlights of HCMF 2014 was the evening concert given by Trio Accanto, comprising saxophonist Marcus Weiss, pianist Nicolas Hodges (a relative newcomer to the group in 2013) and percussionist Christian Dierstein. Although lasting only a quarter of an hour, Brice Pauset‘s Adagio Dialettico, composed 15 years ago, seems to last considerably longer than that, due to the scope of both the material and the interplay between the players. And, to an extent, due to the tempo, its very slow pace affording Pauset considerable time for the presentation and reflection upon his ideas. This is obvious within the opening couple of minutes, an extended piano solo that’s thoughtful and spacious, patient and pensive. When the saxophone joins in, it’s in a similar vein, occupying itself with quiet trills to such an extent that it sounds downright reticent beside the piano, following its motion with the greatest of caution, perhaps even reverence. This relationship persists as the percussion, initially offering dry reinforcement, moves into the foreground on the vibraphone, and only very gradually do all three parts together become more busily integrated. This leads to highly complex, microtonally-inflected counterpoint—almost three entirely independent lines—yet the trio coalesces at high points and ultimately coincides on a unison a little over halfway through. This moment is a very clear structural pivot; thereafter, the music is immediately more sparse and dry, yawning gaps opening up in its fabric; yet, conversely, the effect is to ratchet up the intensity, Pauset pulling us deeper inside the searching material (before, we were practically riding upon its surface). Initially rather solemn, as it irrevocably ebbs away the music just feels blasted, as though it were made of—and performed among—ruins, mere fragments that tremulously collapse into blank motes and shivering trills.

Nowadays, in the age of digital machines, resorting to dialectics imposes living conditions that are hardly relaxing. Yet, that is just what history henceforth requires of us: modernity is meant to be present, the past shows itself to be the point of satiety, combing relics and falsifications.

In this piece, nothing is laid down: each new statement is a possible attempt at the dialectical reduction of tensions. In a way, Guy Debord’s definition of the ‘Baroque’—the art of a world that it had lost its centre—would once again be at work here: the act of throwing off-centre is the norm, and a landscape where the very notion of theme (as in ‘theme and variations’) might be perceived as incongruous. Here, under the welcome pressure of a commission, I wrote a saxophone part for the first time. My initial overzealousness was to set myself off as much as possible (at least consciously) from the usual veiled references to jazz and its eternal, warmed-over clichés. If it were absolutely necessary to designate a historical paternity for the use of the saxophone in my music, I would refer to Alban Berg and the deadly voluptuousness and elegant vulgarity of the cantata Der Wein.

My music is always very simple, but its construction brings together highly differentiated requirements (that would appear to be the official definition of the noun ‘complexity’): the question of listening and recollection, the requirement of combinatorial backgrounds, the terrible presence of the past. L’homme de cour, Baltazar Gracian, a great connoisseur of historical time, said with considerable pertinence: “whether it be action or discourse, everything must be measured with time. It is necessary to wish when one can, for neither season nor the time waits for anyone”.