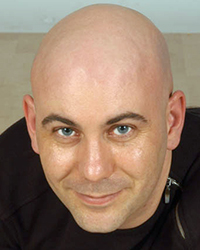 The next concerto in my Lent series is another involving solo cello, Fata Morgana by British composer Patrick Nunn. Composed in 2007, this short work—for cello, chamber ensemble and live electronics—takes its title primarily from the character of Morgan le Fay (known among many other names as Fata Morgana), who in Arthurian legend was a shape-shifting enchantress. The term is also used for a particular type of mirage effect, where objects at sea, visible just above the horizon, become significantly transformed due to the effects of light bending through thermal layers of air. The cello’s character throughout is or aspires to be melodic, and its role is emphatically in the foreground as an instigator of ideas. It emerges, at altitude, out of a strange and complex opening chord, whereupon its material is immediately resonated and expanded by the electronics. Despite calling it an instigator, there’s a somewhat pensive quality to the cello’s behaviour, placing notes and melodic gestures cautiously; this contrasts with the tendency of both the ensemble and the electronics, which feel highly sensitive to the cello’s slightest sounds, extending them while growing in intensity and pace all the time. This reflects back at the cello, which in turn propels itself on, its melody carving deep twisting shapes in the air. At the work’s climax, the electronics, having been everywhere, sputter out, leaving the cello—again very high (Nunn clearly relishes the expressive potential of the instrument’s uppermost register), but now increasingly motionless and mysterious—to be draped in an assortment of differently coloured aural swatches by the woodwinds, before sliding up into the stratosphere.

Broadcast in July 2011, this performance took place during Electronica III at the South Bank Centre, by Benjamin Hughes on electric cello with the BBC Concert Orchestra conducted by housewives’ favourite, Charles Hazlewood.

Thanks for posting this piece, which feels very close in my mind to the Lutoslawski concerto, not so much because of the forces employed, and still less because of any extra-musical “meaning” (especially if the popular interpretation of the Lutoslawski is taken at face value), but because it has the same kind of expressive directness, seemingly born of the same fervent conviction that complexity of means should be no barrier to universality.

Listening to it certainly made up for the disappointment of the Great Yorkshire Wiggle, which Daddy had naively imagined might be a fun place to which to bring two 5-year-olds on a damp Sunday afternoon…