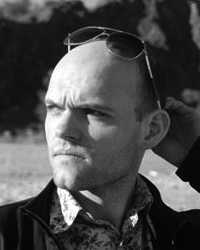 Without wishing to appear too biased towards the cello, the next concerto in my Lent series is another work that features that instrument at its epicentre. A few months back, i was enthusing about Davíð Brynjar Franzson‘s radical treatment of the piano; in his new work on Matter and Materiality, he puts the cello into an equally radical but altogether more gruelling context.

If the soloist can be described as not doing much, it’s certainly not for want of trying. It sounds as though Davíð Brynjar has detuned the C-string down to a bottom D (a similar effect to that in Rebecca Saunders’ Solitude), and this note becomes the unwitting nadir of the cello’s repeated failed attempts to haul itself up or out or along. These attempts are expressed in a dogged series of grinding swells (orchestral colours can be barely glimpsed within them); ostensibly tinged with aggression, the instability of the cello’s timbre coats its pitch with spasmodic harmonics and overtones, exposing it as utmost fragile, all throbs and palpitations, music in dire need of defibrillation. Heavy bow pressure, far from obtaining some kind of solidity (or, considering the title, ‘materiality’), only undermines this fundamental further, causing it to waver and distort. The woodwinds, perhaps reacting to such a trammelled display, extend a chord, establishing a point of reference, shining a light in the darkness. But despite this meaningful act of encouragement—which momentarily appears to aid and reinforce the soloist’s attempts at pitch focus—the cello becomes less certain, less substantial, its tone wafer thin, whereupon it undergoes a complete collapse of coherence, reduced to mere grunts. The winds’ fixed pitches now sound painful by contrast, the cello unable even to crane its head up sufficiently to see the light, let alone aspire to reach it.

Davíð Brynjar Franzson may not have intended on Matter and Materiality to carry the kind of emotional weight i’ve described it as having; it could be read more simply as an examination of what constitutes ‘matter’, and what makes something ‘material’. But the way Davíð Brynjar explores this is vividly drenched in drama, tenebral and desperate.

The world première of on Matter and Materiality, performed last October, was given by Séverine Ballon (who also premièred Saunders’ Solitude; she clearly thrives in arduous musical territory) with the BBC Scottish Symphony Orchestra conducted by Ilan Volkov.