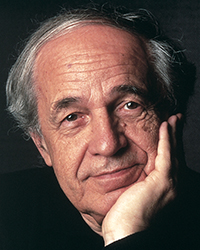 The second concerto-esque work by Pierre Boulez that i want to explore this week is Messagesquisse for cello solo and six cellos. The gestation of this piece was very much more straightforward than that of Mémoriale, being composed in 1976 as a 70th birthday present for that great champion of so much contemporary music, Paul Sacher (Boulez’s Sur incises would be another birthday present for Sacher 20 years later). The title overlaps the words ‘messages’ and ‘sketch’ at the letters “es”, being both the first letter of Sacher’s surname and the German term for the pitch E-flat. This is indicative of the kind of thing Boulez gets up to in Messagesquisse, where Sacher’s entire surname is translated into musical pitches—E♭, A, C, B♭ (H in German), E, D (presumably from the solfège Re)—forming a hexachord that is subjected to considerable serial and motivic treatment. Sixes occur elsewhere too: as well as the ensemble group of cellos, the work is structured with this many sections.

Despite its pitch-based systematic rigour, Messagesquisse, like Mémoriale, is disarmingly simple in the way it comports itself. Fittingly, it’s a spirit of exuberance that characterises much of the music. But not initially; Boulez articulates Sacher’s name rather magically at the start, with accented harmonics that the cellos gently (and, at first, imperceptibly) sustain, forming faint streaks in the air. In the section that follows, using spacial notation, the solo cello explores ideas based on this motif while the ensemble introduce quantities of restlessness, tremolandi becoming increasingly rapid col legno tappings. Boulez now snaps everything back into metric order and regularity in a lengthy moto perpetuo, the six cellos reinforcing some of the soloist’s unstoppable semiquavers but doing their own parallel thing as well; it’s a strange episode, and trying to make sense of it (compositional sense i mean) is a bit like trying to appreciate the landscape from a runaway train. This hurtling romp is answered by something of a combo section, incorporating quick-fire isolated phrases over extended trills; sharp-eared listeners should listen out for Sacher’s name being spelled out backwards in Morse code, each letter heard on pizzicati passing down in pitch through the cellos. The tendency is toward spaciousness again, leading to an effectively slow and pensive cadenza for the soloist, turning over assorted ideas from before. Boulez finally—and rather brusquely—brushes this aside in a coda that unites all seven cellos, returning for one more fling through the perpetual motion machine.

This performance took place in the same 2012 Proms concert as Mémoriale, given by cellist Hassan Moataz El Molla with members of the West–Eastern Divan Orchestra conducted by Daniel Barenboim.