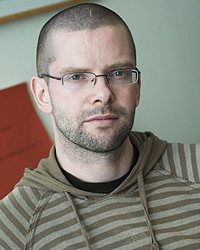 Premières – there have been some interesting ones of late, so let’s get back to them. It’s almost five years since Swedish composer Albert Schnelzer has been featured on 5:4, when his quirky orchestral work A Freak in Burbank was played at the 2010 Proms. A few weeks ago, his new work Tales from Suburbia received its first performance at the Barbican, by the BBC Symphony Orchestra conducted by Kirill Karabits. Similarities between the two works are strong; clearly, one of Schnelzer’s most overt stylistic traits—one that may prove off-putting for some—is a resemblance to the world of film scores. In the case of Tales from Suburbia, this seems even more prominent, as there is a deliberate sense of narrative at play; Schnelzer has described the piece as being “like a diary”, referring to his own suburban experiences, although noting that they are “not a paradise … it can be a frightening place”.

Depending on your perspective, and whether you tend to judge glasses as being half full or empty, the piece either takes this as its default position, with dark, mysterious, ominous passages being the norm, offset with sporadic, ephemeral episodes that aspire to, but cannot sustain, lyrical outbursts. Or, on the other hand, Tales from Suburbia can be heard as a work where lyricism is the thread running throughout, grappling with occasions where the line is lost in more blunt and generalised material, characterised by rhythmic drive and/or sullen uncertainty.

Both interpretations, in their own way, are just as valid; Tales from Suburbia engages most via this interesting and dramatic interplay between behavioural opposites, where melodies and motifs become rivals (in turn suggesting a friction between soloistic and group activity), and where clarity and obscurity are poles within which the piece oscillates. Personally, i don’t think it any disgrace to liken aspects of Schnelzer’s approach to the world of film scores; not everything rings true, perhaps (the opening mark tree feels a trifle on the nose – a moratorium on this instrument for a while might not be a bad thing), but Schnelzer’s approach to orchestration is exciting and at times unexpected. Instrumental groups tend to flock together, but here that tends to aid the characterisation of the work’s narrative, wind, brass and strings nailing their colours to the mast clearly throughout the work’s various dramatic turns. Despite the open interpretations, rhythm does seem antagonistic in this context, an act of unity that ends up running away with itself, erasing more individualistic ideas, often heralded or echoed in lingering heavyweight accents from afar. But the lyrical elements are strong too, carrying a potent sense of searching, free from metrical constraints, and also passion, culminating in some exhilarating moments of full-on freakout. If daily life in the suburbs of Stockholm is really like this, it must be very difficult to sleep at night.

How great that your link to the 2010 work A Freak in Burbank is still alive, as is the FLAC download. That allows me to get much more perspective on this composer. Thanks for your great observations and writing.