New Music in the South West: Music and Art

Last Sunday saw the first concert of the year given by New Music in the South West, an organisation founded a couple of years ago by composer Julian Leeks, based in Bristol. Taking place within the city’s grand Royal West of England Academy of Art, the concert was interconnected with ‘Drawn’, an annual open submission exhibition exploring the diverse facets of drawing (in the midst of which the concert took place), and ‘Four Seasons’, an exhibition of the work of Zhang Enli at the Hauser & Wirth gallery in Bruton. The concert specifically posed the questions, “How does one define the relationship between music and art? How might a work of visual art be re-imagined as music?”. Answers were offered from a collection of composers, all but one of whom have South West associations: Geoff Poole, Julian Leeks, Litha Efthymiou, Jean-Paul Metzger and (the odd one out) Hildur Guðnadóttir. Performed by the Bristol Ensemble String Quartet, the five works were stylistically contrasting and, broadly speaking, offered compelling takes on their respective inspirational origins. 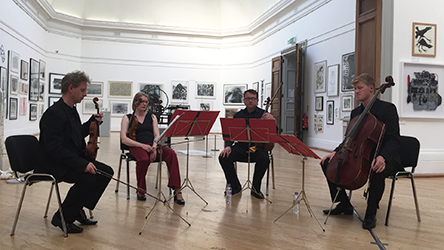 Poole’s response to Zhang Enli, Zhang Seascapes (receving its world première), focused on three of the artist’s large aquatic paintings, seeking an aural analogue for their respective textural and tonal characteristics. Up to a point, they worked; of the five composers, Poole’s language was easily the most conservative, yet a combination of enthusiasm and some deft imaginative twists kept the three movements interesting. They weren’t helped by occasional ersatz ‘Oriental’ melodic touches (bringing to mind Tan Dun’s soundtrack work), but these were mercifully brief, and an engaging central gear-change led by the cello led to a rather nice soft coda of whispers resulting from soft bowing directly on the bridge. Metzger, writing for just violin and viola, approached Enli’s art via his pencil grids used as a construction aid and allowed to remain once the paintings are finished. This led Metzger to utilise the Lo Shu Square, the players drawing their material from different regions of the grid. While a description likes that sounds emotionally unengaged the result, titled Another Season (also receiving its première), was both beautiful and eloquent. The relationship between the players is nicely ambiguous—are they unrelated? is it a dialogue? or are they twin aspects of a single common voice?—and the emphasis throughout on line, with certain intervals given special emphasis, was lovely, all the more so within the slightly resonant acoustic of the gallery. 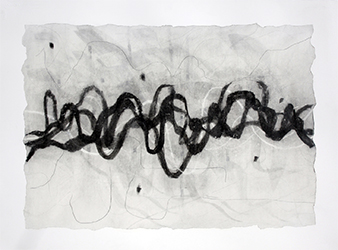 Julian Leeks’ String Quartet comprises two movements that exist in opposing relations to the work of Fiona Robinson (an artist whose work i’ve admired for many years); the first, ‘Anywhere Else But Here’ led to Robinson creating a piece in response (see right), which Leeks then in turn used as inspiration for his second movement, ‘As Darkness Fades’ (he refers in the programme notes to Robinson’s piece being “a silent middle movement”). The evidence of this back and forth was strongly evident, and didn’t always work in the composer’s favour. The first movement, with an insistent recurring pizzicato note from the cello, too brisk to be funereal but sufficiently relentless to be unsettling, sounded as though it was draped in velvet, speaking with a kind of laboured lyricism. The violins and viola enter one after the other, gradually establishing a fullness of sound that falls short of sounding rich—which in this context seemed entirely appropriate. The second movement, by contrast, felt more self-conscious in its attempt to respond to Robinson’s visual stimulus, resulting in a palpable reduction in the kind of spontaneity heard earlier, slightly mitigated in its pizzicato-driven dance-like conclusion. 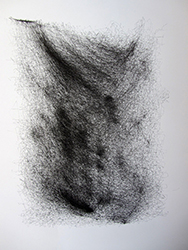 Hildur Guðnadóttir’s short piece From The Other Place uses a visual set of colour-coded instructions determining the starting point, behaviour and movement of each player. While this suggests independent lines, the result is actually almost entirely harmonic, the instruments moving together through a sequence of chords that flirt with notions of progression and cadence. As such, it establishes an enchanted sense of floating and stillness (redolent in this respect of Arvo Pärt), although the obvious final tonic chord rather undermines that sense and made for a uncomfortably bumpy landing. Both at the time and in hindsight, it was the closing work in the concert, Litha Efthymiou’s Tread Softly (another world première), that proved the most striking and memorable. Responding to ‘Retracing Your Steps – Bristol II’ by English artist Debbie Locke (see left), Efthymiou’s highly-wrought music went a long way to capturing the essence of Locke’s fantastically intricate filigree. Efthymiou employed a more sophisticated and nuanced treatment of the quartet than the preceding works, and the way material manifested and then re-manifested itself as the piece progressed was impressive and deeply immersive. This was even the case at its climax, a highly dissonant, motoric fever pitch that neither oppressed nor repulsed; the conclusion fell at the opposite extreme, a gorgeous, veiled epilogue that one almost never wanted to end. Tread Softly is a stunning piece that would greatly benefit from further listenings to appreciate more its wealth of inner details.

Apropos: there’s a second opportunity to hear these pieces at NMSW’s next concert this coming Saturday, at the Hauser & Wirth gallery in Bruton where Zhang Enli’s works are currently being exhibited. Somewhat out in the sticks, i admit, but an enjoyable and thought-provoking evening of music and art well worth seeking out and experiencing; full details can be found here.