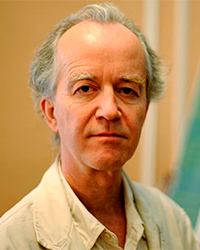 A composer whose work has for many years left me both amused and bemused is Peter Ablinger, whose latest large-scale work QUARTZ was also premièred at last month’s Tectonics festival. The piece is in keeping with Ablinger’s ongoing concern with the way relatively rudimentary—not to say mundane—sounds are perceived when heard in conditions that afford a new kind of scrutiny. Here, the relentless ticking of a small quartz clock becomes the basis for a four-part orchestral study; subtitled “for high orchestra”, this indicates at the outset that almost everything heard is in the uppermost registers of the instruments. Ablinger made a recording of the clock, which was then subjected to a frequency analysis to tease out its pitches; this recording is heard at the close of each movement, acting as something between a cadence and a reference point, returning the piece to a kind of ‘default’ position.

Not surprisingly, the four movements, each located within a narrow band up in the pitch domain’s stratosphere, bear strong resemblances to each other, but the act of listening to such similar materials causes even small differences to feel immense. An instrument entering or leaving; momentary rhythmic gaps; alterations in the clustered harmony; brief jittering asides; instances of irregularity or deviation from the underlying pulse (particularly in the second and third movements); changes in the duration of each ‘tick’; the synchronicity of the orchestra both within itself and—more noticeably—with respect to the recurring tape; undulations in dynamic from moment to moment and between movements: all of these and other facets become heightened to a considerable degree, and it causes an interesting listening perspective in which one’s ear rapidly jumps back and forth between focusing on the details of each passing accent and then pulling back to consider and appraise it within its larger context.

As is typical of Ablinger’s work, it’s bizarre and fascinating in equal measure. The world première was given by the BBC Scottish Symphony Orchestra conducted by Ilan Volkov.

I find this boring and not fascinating at all. I’ve heard plenty of minimalist music but this just grated and felt like it went nowhere. Pretentious.