Moving on from exotica, for the last couple of days new music at the Cheltenham Music Festival has been revisiting aspects of the past in order to reflect on the present. Yesterday night, back at Parabola Arts Centre, this was manifested in a pair of chamber operas, performed by Nova Music Opera. i’ll resist the temptation to write about the latter of the two, Thomas Hyde’s That Man Stephen Ward, which ranks as one of the most nauseatingly effluvial dramatic works i’ve ever encountered, and focus instead on the very different experience that was Charlotte Bray‘s Entanglement, receiving its world première. It seems to be the case with contemporary opera that it takes a while to grasp the essential language with which it’s speaking, and while i thought that was the case through the first couple of scenes of Entanglement, it became apparent that it had launched straight into its expressive heart at the outset. Bray’s ensemble is very small (flute, clarinet, percussion, violin, cello and double bass) and her use of them is, to say the least, sparing. On top of this the three singers’ utterances, initially at least, were highly metric, with minimal use of melismas. 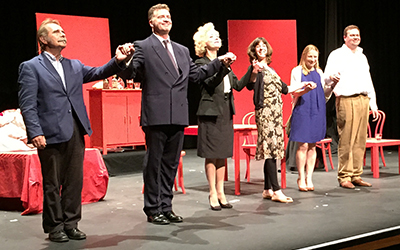 For her story, Bray and librettist Amy Rosenthal have turned to Ruth Ellis, the last woman to be executed in the UK, presenting a compressed re-enactment of her last couple of years. To this end, Bray opts for an austere musical environment (aided in no small part by Nova’s well-judged minimal staging), one where almost all warmth has been expunged, leaving only a pervasive tone of stiffness and tension. This works in multiple ways; it avoids seeking simply to mirror the emotional machinations on stage, providing for them an environment within which they can play out (the instruments are often placed in very high/low registers, away from the voices, while the percussion is always unpitched). Furthermore, the coolness of the music echoes Ellis’ own composure when considering her actions beforehand and facing their immense aftermath. Rosenthal’s libretto, too, is matter-of-fact and to the point, almost curt. All of this sets up a thought-provoking kind of stillness, where events before and after the critical murder scene feel all part of the same trajectory, filling the first half of the opera with a sense of inevitability, answered with resignation in the latter. Bray’s approach works a bit like a post-match analysis of a chess tournament (more than once the singers seemed to resemble chess pieces), a simple, almost aloof representation of something with multiple layers of highly-charged dramatic subtext. Are murders ever inevitable? What makes someone a murderer? By not trying to unravel or make sense of these important questions (as pressing today as ever) and their complexities—it is called Entanglement after all—the opera leaves one troubled and with much to consider. It’s a courageous piece, deeply affecting and effective.

On Sunday, the calendar was turned back even more, to the first and second world wars, for a concert at Cheltenham College Chapel given by the ensemble Kokoro and Canticum Chamber Choir. The concert wasn’t only about war, though; Peter Wiegold‘s short choral suite Scare-Fire (receiving its première) went back yet further, to the 17th century poet Robert Herrick, and a sequence of poems suffused with various aspects of love and longing. Perhaps to indicate love’s magical qualities, it began with the conjuring of a spell, heard in huge, rich chords that seems to radiate light in all directions. Wiegold then moved through more intimate vignettes, reflecting on the beloved’s breath—set simply until the word ‘spices’, triggering complex counterpoint—and even her bed, in a touching scene of understated but overwhelming infatuation. Alternations between the intimacy of soloists and the full choir came to the fore in ‘Another On Her’, recalling aspects of the spices from before, passing into a dense tutti; in a lovely, subtle way, Wiegold segues into the titular final piece, beginning “Water, water I desire” – a line that works in both directions, back toward the inflamed feelings of the previous text and on into the literal raging fires of ‘The Scare-Fire’. The dense convolutions of its texture suggested mixed emotions, although no less passionate than before. For all their brevity, Wiegold’s settings tap into an raw intensity of feeling rather rare in contemporary choral music. Nicholas Morrish Rarity‘s ensemble work Abandonment & Ruin, after a lovely series of registrally and timbrally disjunct opening tableaux, initially felt somewhat ‘borrowed’ in its use of language and manners, resulting in music that was a trifle generic and featureless, but over time proved an altogether more telling and impressively individual composition. Rarity describes the work’s three sections as ‘chambers’, the second of which, led by the clarinet, placed eloquence within an environment that felt blasted; this was taken further in the final ‘chamber’, an alto flute-dominated epilogue where shrieks of keening heard at the start are turned into deep, aching sighs. In its own way it was a worthy reflection beside the two larger scale war-inspired works, Poulenc’s Figure Humaine and the concert’s last world première War Songs by Hywel Davies. Located somewhere between an oratorio and a song cycle, War Songs aims for, and achieves, surprising levels of intimacy, which fit its staunch, unflinching emphasis on the sombre realities of war. The texts—drawing on Anna Akhmatova, Lichtenstein, Ungaretti, August Stramm, Apollinaire and others—mark a progression from an ominous foreboding through blank fatalism into the infinite void. That void, of course, is unknowable, but its wrenching wretchedness was vividly captured by Davies in episodes that, although highly contrasting and variegated, were clearly following the same unstoppable, preordained progression. The music’s recurring lyrical voice became increasingly poignant in the midst of such sombre mournfulness; the third verse of the opening song, evoking Jesus’ words from the cross, extruded from its surroundings, and even more so the third song, ‘Vigil’, where the use of octaves in a chant-like melodic line gave the impression of a secular affirmation of faith. The fourth, ‘Primal Death’ was astonishing to behold, a long, drawn-out ritual with Arvo Pärt-like purity but its every phrase etched with utter humanity (even humanism). A pair of more conventional anthem settings seemed out of place in this context, as Davies tapped into new levels of bleakness to tease out an uncanny kind of wraith-like engagement with reality; in the sixth song, Davies allowed the voices some warmth at their recollections of lost love, only to dismiss them in an instant: “It is a spook.” The latter half progresses to a place that emphasises the immateriality of death and even humanity itself within the bigger picture of life on earth. The work’s epilogue was lovely, all the more so for its ambiguity and ambivalence, indicating new beginnings (reinforced by octaves and fifths) yet also conveying the sense of a spent aftermath. With war continuing to be an ever-present facet of our lives, Hywel Davies’ War Songs is a vital contribution to the ongoing reflections that must surround such conflicts. It is sombre, grief-stricken, full of fear and dread, shot through with occasional flashes of implied light in its darkness, and (if we want it to be) just the faintest glimmer of what might be called hope. Every word and note of this piece rings horribly and utterly true; it’s magnificent.

And, sad to say, that brings to end the coverage at the 2015 Cheltenham Music Festival. They may have ditched the word “contemporary” from their name back in 1962, but the emphasis has more-or-less remained since that time. This year’s programme, though, contains far fewer contemporary music than usual; one can only hope this is temporary, and that next year will see more—a lot more—new music back on the programme; it’s what the festival was created for, and what it’s always done best.