Three years ago i remarked how the performance of Michael Finnissy‘s Piano Concerto No. 2 was only the composer’s second appearance at the Proms, opining that “one can only hope he will be much better represented in years to come; he is truly one of our best”. It’s therefore wonderful that Finnissy has been commissioned for this year’s Proms season, producing a work that forges a connection of sorts with Sibelius, whose music occupied the rest of the concert. Titled after Sibelius’ affectionate nickname, Janne is somewhat special in Finnissy’s output, as it is only the ninth time that he has written for orchestra, a curious fact in itself for a composer whose worklist currently comprises in excess of 320 pieces. Having hitherto flitted between large and chamber-size orchestras, for Janne Finnissy has utilised the same modest forces used by Sibelius in the brace of symphonies (numbers 3 and 4) performed either side of it. 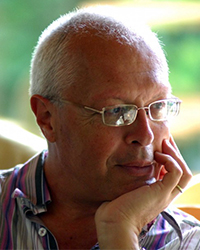 A ubiquitous facet of Finnissy’s music is the way he appropriates existing musical materials as points of inspiration, which on this occasion is folk music from the Finnish epic, The Kalevala. This becomes the firmament and grain of a series of episodes that Finnissy describes as ‘variations’. Not surprisingly, melody reigns through much of the piece, effused with high lyricism from the outset, in a lengthy doleful line drawn by a lone bassoon. It invites and instigates imitations and spin-offs in the strings, leading to a duet, the first of many conversational passages in Janne that assert an intimate kind of counterpoint, music that sounds like it’s listening as much as speaking. Drama emerges particularly strongly from developments in texture, passing from the kind of bare clarity heard in those contrapuntal passages through dense accumulations (usually the preserve of the strings) that at first seem distinct but one quickly realises are actually vague and even somewhat inchoate, as though the music were continually returning to a chrysalitic state, reforming into something new. The sections of the orchestra extend the drama through interplay and juxtaposition: an abrupt muscular cutting-in of the strings, the brass suddenly deciding to act like a bunch of heralds, woodwinds presenting something hitherto unheard, hopping around like grasshoppers. The music is very far from unpredictable, though; on the contrary, the melodic thrust established at the start, although considerably developed, persists as an omnipresence, lending a certain kind of seriousness to Janne, its boistrous moments held in check, its bullish outbursts sufficiently thoughtful that their assertiveness sounds qualified. Warmth permeates the work too, which culminates in what may be more direct references towards the end (the theme following the variations, perhaps), with chant-like material played on two bassoons above a low drone. Yet Finnissy’s music always has a twinkle in its eye, and possibly as a rebuke to the earlier heady heights of lyrical ardor, the piece closes with an unexpected outburst of jaunty staccatos, cheekily puncturing Janne and letting out all of its air.

What originally drew me to Finnissy’s music, way back in the mid-1990s, was its melding of taut, intricate filigree with (hyper-)intensely passionate lyricism; yet, for some—no doubt mostly people who know little of his music—Finnissy represents a different kind of composer, one associated with rather blank notions of complexity and its concomitantly forbidding characteristics. Janne must surely lay these naïve misconceptions to rest; indeed, for all its inner convolutions and entanglements, it may well be one of the most accessible new works of this year’s Proms.

The world première of Janne was given by the BBC Scottish Symphony Orchestra conducted by Ilan Volkov.

Beautiful new piece from Michael Finnissy.
Among the strongest of the commisons so far.

I wanted to discover more about this composer and was perplexed by the negative stance for his biography on his clunky website:
“My biography? Doesn’t “fit in”. From the wrong side of the tracks all the way. Virtual failure in commercial terms, but who the hell cares either way?”
The reality is otherwise and there’s a risk of self-prophecy here! Elizabeth Lutyens fell into the same trap.