New music at the Proms, and the season itself, came to an end at yesterday’s Last Night, with the world première of Jamaican-born composer Eleanor Alberga’s brief concert-opener Arise, Athena!, performed by the BBC Symphony Chorus with the BBC Symphony Orchestra, conducted by Marin Alsop. According to the composer, the piece (ahem) arose from a desire to have a female theme, Alberga drawing on the Greek goddess Athena for inspiration, citing her connection (among many others) to “wisdom and the Arts”. 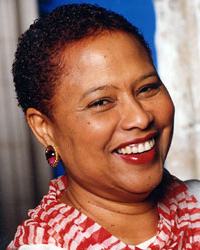 As the title implies, the work is an invocation, utilising a short text of Alberga’s own as a kind of rallying cry. Turbulence becomes fanfaric, becomes a choral society-friendly holler, becomes a polite tub-thumping welcome to the most conservative and predictable of all musical occasions. And there, stifling a yawn in the face of yet another Last Night irrelevance, we have it.

In retrospect, i think my optimism about the 2015 Proms turned out to be a little, well, optimistic. It’s been a pretty disappointing season from the perspective of new music, with the usual cluster of notable exceptions; once again, the use of electronics in new music has been entirely overlooked, but it’s heartening to see that a third of the new works were by women composers, a substantial improvement on last year.

As usual, i’ll reserve my summing up of the season for a couple of weeks’ time; until then, if you haven’t already, visit the Proms 2015 polls page to express your views about each of the 23 premières. In a fortnight, i’ll summarise the results.

My main sources of inspiration come from spiritual and emotional forces, Greek mythology and other narratives, and nature. One of my priorities is to attempt to communicate with the audience, hopefully on a deep level.

The idea for ‘Arise, Athena!’ came from deciding to have a female theme to the work. Because of my interest in Greek mythology and because of the present conflicts and troubled state of the world, I immediately thought of this Goddess of wisdom and the Arts. If humanity held more wisdom and interest in the Arts and less greed for power, perhaps we would not be drawn into such extreme political circumstances.

This work lies within the most tonal spectrum of my music and the imagined narrative is as follows:

The world sleeps in innocence. The Gods and Goddesses are in their distant home and nature is calm. A strange force stirs, agitating the peace. Humanity calls on Athena to rise up and bring wisdom and music to the world. The danger is banished and everyone rejoices.