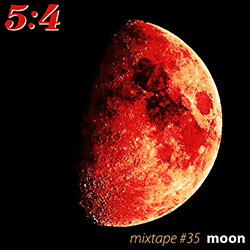 Taking inspiration from the lunar events at the start of this week, the new 5:4 mixtape is devoted to music related to the moon. i’ve crammed it with a veritable shed-load of personal favourites, small and great, old and new. The mix encompasses a broad spectrum, from the kind of soft delicacy heard in pieces by Toshio Hosokawa, Tor Lundvall, Pram, Alva Noto & Ryuichi Sakamoto, Implex Grace, Sunken Foal, Andrew Liles, Aun and The Noisettes to more abrasive expression in works by First Human Ferro, Philippe Petit (& Friends), Paul Dolden, John Williams and Chelsea Wolfe. Wolfe’s is one of a number of moon-related songs featured in the mix, alongside the very lovely Cemeteries (with one of my favourite tracks of 2015), Betty Ween, Radiohead and—heard in a miniature epic of gorgeous proportions—Julia Holter. The timebound yet timeless Johnny Howard Orchestra adds a bit of froth, immediately followed by its more sour hauntological answer courtesy of The Caretaker; Ochre and some vintage Multiplex bring a bit of play to the proceedings, while Eric Serra adds a brief note of cinematic grandeur and Natasha Barrett dives into a strange but exquisitely light soundscape. A sumptuous bit of nocturnalism from Richard Strauss acts as a coda, leading into the night proper via Chris Watson. Serving as structural markers throughout are the four parts of Harry Partch‘s hilariously mental Ring Around the Moon. Lycanthropes might want to give this particular mix a miss.

A little under two hours of sound from the lunatic fringe; here’s the tracklisting in full. If you enjoy the mix, there are links below to buy the music.