There are just four days to go until the start of this year’s Huddersfield Contemporary Music Festival, and UK audiences get the chance–denied them at most other festivals on these shores—to experience some of today’s most experimental, radical and open-minded music-making. All being well i’ll be there for the duration once again, but in the meantime, as something of an appetite-whetter, i want to revisit something from last year’s festival.

Partly but not entirely due to the presence of Jürg Frey as composer-in-residence, HCMF 2015 was characterised by a distinct thread of simplicity and restraint, obtaining the maximum effect, power and overall use from relatively spare and at first glance potentially unpromising material. Of course, in such contexts as these words like ‘simplicity’ and ‘restraint’ become themselves redefined, to the point that a pianissimo note from Jacob Ullmann becomes shockingly outré, or a change of chord from Chiyoko Szlavnics feels as though the whole world has either been tilted on its side or stopped spinning on its axis.

Lines and Spaces by UK composer Naomi Pinnock occupies a not dissimilar place of compositional thought. Drawing on the minimal abstract art of Agnes Martin for inspiration, the piece, for solo piano, is made up of six short movements, the even-numbered of which correspond to the lines of the title. Simplicity of the kind i mentioned above reigns here, each ‘line’ located around an extended, repeated middle C (the relative speed of the repetition decreases across the three movements). The first is coloured by a single C an octave lower, the second by a D and B immediately above/below, followed by some pedal smudge. The third is struck with a glancing triadic blow that retains more than enough consonance to keep the ‘line’ stable until it too is smudged before fizzling out, its string muted. 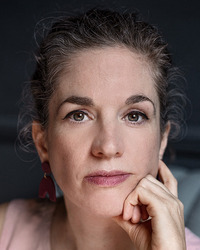 The odd-numbered movements, comprising the ‘spaces’, are somewhat paradoxical. On the one hand they display a kind of floating liberty, free from obvious harmonic and/or metric underpinning. Yet the way each chord or note is positioned with respect to its neighbours carries an overwhelming sense of deliberation and the greatest care having been taken. In short, regardless of how they were actually composed, they sound fastidious. (This is reinforced by the fact that the first two begin with the same chord, which includes middle C). In the first, there’s a distinct impression of movement in its collection of pitches that implies a faint melodic line within; the last is occupied with small, assertive searchings resolved in a soft E-B perfect fifth. Pinnock makes the conclusions of these ‘spaces’ subtly interesting divergences from their respective norms: the first opts for single notes instead of chords, the third uses just an E at its close instead of the usual fifth. The large second ‘space’—occupying over a third of the total work’s duration—is highly impressive. Reviewing it almost a year ago i spoke of “calm, measured droplets of harmonic colour like blobs of ink falling into water” and how this movement “was immersive, seemingly expanding to subsume the performance space, filling it with a complex constellation of drifting celestial bodies”. The first of those comments is still exactly what the music brings to my mind, its short melodic phrases coloured in a way that really does sound like small splotches of sonic pigment dropped into water, staining and melding with each other (bringing Debussy to mind). But on further listenings away from the concert hall, that sense of it filling the space has been given an extra quality of intimacy that makes it yet more effective (even more so through headphones), as though one was bobbing in a bubble surrounded by Pinnock’s slight floating motes of hue and tinge. Seriously intoxicating stuff; has opulence ever been handled with such delicacy?

The world première of Lines and Spaces was given last November by one of contemporary music’s most sublimely lyrical pianists, Richard Uttley. Both Uttley and Pinnock will be back at this year’s festival (in the same concert, no less), which all kicks off on Friday evening. Full details about everything festival-related can be found via the HCMF website.

Whilst composing these miniatures I kept coming back to Agnes Martin’s exquisitely simple paintings. They have shown me over and over again how much is possible with lines and spaces. They are just grids and lines, and yet they evoke much more with the delicate layering of paint and beautiful imperfections.
These miniatures fluctuate between compressing or expanding, creating a bold line or subtle bands of faint colours.

Simon, this year I’m going to be doing the rounds of much of the “free” stuff on Monday afternoon before settling in for the Lim/Cassidy talk and concert the following day. Maybe our paths will cross…

Many thanks for posting the Pinnock piece, which for me too was a highlight of the Uttley concert. What I’d really love to hear again is that Fender Rhodes piece, but I don’t think it ever found its way into the R3 coverage.

i really wish they had broadcast the Michael Cutting piece, although i can’t help feeling something would valuable would have been lost without the visual element… Looking forward to hearing what he’s come up with for this year!

Indeed – i’ll be looking out for you 🙂

[…] in the form of colours and carefully-arranged lines and grids. As in Pinnock’s earlier piece Lines and Spaces, this becomes the basis for music where ostensibly great simplicity belies quantities of underlying […]