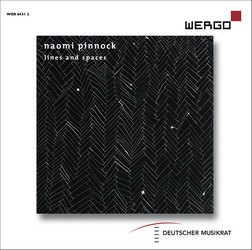 It’s fitting that the first portrait disc devoted to the music of UK composer Naomi Pinnock should be titled Lines and Spaces. Not merely because one of the four works featured on the disc has that as its title, but due to the fact that every time i’ve listened to it it’s got me thinking about polarities. There’s a reference to the musical stave in that title, but it also alludes to one of Pinnock’s recurring inspirations, the work of artist Agnes Martin, whose paintings are characterised by the juxtaposition of line and space, usually within a soft, muted colour palette. Though the polarity seems obvious, my own experiences with Martin’s work in recent years have found the apparent opposite of elements to be more complex. Are the lines ‘material’ and the spaces ‘immaterial’ (in every sense of the word), or do the spaces exhibit a different kind of ‘materiality’? Furthermore, do the lines enclose space, exerting an implied inward force, or do they simply demarcate the bounds of the space, which exerts an implied outward force? Maybe it’s a bit of both; either way, the two are held in a perfect equilibrium, but one that paradoxically seems both taut and relaxed.

The same could be said for a great deal of Naomi Pinnock’s music. The most explicit example of this, unsurprisingly, is to be found in the title work, a piece for solo piano comprising three ‘spaces’ and three ‘lines’, performed here by its dedicatee, Richard Uttley. A work i’ve written about previously, its polarity is primarily heard in the contrast between these discrete kinds of music. The ‘lines’ consist of rapid middle C repetitions, each of which has a different element introduced at its centre – an octave displacement, adjacent pitches, and an oblique chord cutting across – resulting in a simple bare-bones drama. The ‘spaces’ are expansive; i likened them before to “droplets of harmonic colour like blobs of ink falling into water”, and while the essence of that is right, i realise that that description possibly suggests a disconnect between them, as if they were isolated motes of pitch unrelated to one another. The reality is that there’s a form of contemplation going on, a quiet wrangling with notes in which ideas don’t just connect but circle around in a way that suggests an underlying obsessive quality. There’s that equilibrium: taut and relaxed, the music sometimes temporarily fixated, sometimes breezily moving on. It’s worth emphasising that Uttley is the ideal pianist for music like this; i’ve always admired his ability to combine intricate precision with understated romanticism, which is the perfect combination for a piece like Lines and Spaces.

That obsessive aspect i mentioned is prominent in the two movements of Pinnock’s String Quartet No. 2. There’s a continual sense of struggling, increasingly forcefully, with a single idea – initially just from a solo violin but quickly occupying the entire quartet. Jagged and sharp, it finds its opposite in moments of suspension and the appearance of a high strand of melody, both of which act (for a time, at least) to becalm the aggression which, when it returns, is more wild and erratic than before. The second movement, though much quieter, is no less obsessive, its idea going round and round and round, though now it appears to be evolving. In contrast to the previous movement, progress (and, possibly, transcendence) is made through calm tenacity rather than energy, leading to an unexpected ending that’s one of several instances on this album of the uncanny.

When i wrote about the world première of Words for baritone and ensemble (the same performance used in this recording) i referenced Samuel Beckett, but in hindsight i suspect that association is too easy and superficial to make. The text (devised by Pinnock) certainly evokes Beckett – “why solve a night without why without silence without why nothing why again nothing why” – yet the more time i’ve spent with this piece the more i feel that that comparison sells the piece short. Perhaps the baritone is struggling to articulate, or perhaps he’s caught up in some form of reverie. Likewise, in another sort of polarisation, it’s hard to decide to what extent the baritone, and the shining mandorla around him provided by the ensemble, is active or passive. Perhaps, again, it’s both (taut and relaxed), but i can’t help feeling that the tactility of the baritone’s delivery displays a radical sensuality, soloist Omar Ebrahim lingering over the words as if trying to hold them in his mouth and on his tongue, savouring every tiny part of each phoneme. The most inward piece on the album, i like how open to interpretation Words is, all the more so due to its insouciance, raptly holding our attention without apparently trying to. Genuinely mesmeric music.

i wonder whether, beneath all this talk of equilibrium and polarisation, the deeper essence of Pinnock’s music (and also Agnes Martin’s art) is its fundamental sense of balance. That’s what comes to the fore in the most recent, and the most inscrutable, work on the disc: Music for Europe, composed in 2016. There’s a polarity of sorts here, though it’s more elusive, perceived in a delicate balance between austerity and playfulness. Feldman-esque chord sequences blankly process, answered by air noise and swishing sounds, and far-off repetitions on piano and glockenspiel. It’s a bit like watching water freeze and evaporate at the same time, producing a kind of ‘non-material’ or, rather, the moment when material first begins to form. Loud harp notes in its final section don’t just come as a shock to us but appear to bewilder the ensemble too. Everything changes: and the final moments shift to varying forms of accent, concluding with one final polarity: lugubrious wind chords topped with a shining hint of bowed metal. Baffling, beautiful and perfectly balanced.

Another of Wergo’s excellent Deutscher Musikrat-sponsored portrait discs, Lines and Spaces is available on CD and download.