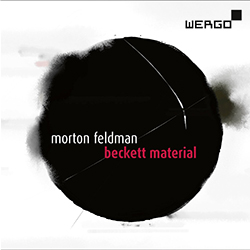 It’s been good to get back to the plethora of new releases that have have found their way to my door in recent weeks and months. While i don’t like to make spurious connections between disparate pieces of music, i’ve been fascinated at the way various composers explore the interplay between what we might call the ‘virtual’ and the ‘actual’. In Morton Feldman‘s 1976 ‘Beckett trilogy’—comprising Orchestra for orchestra, Elemental Procedures for soprano, mixed choir and orchestra and Routine Investigations for six players, released together on a CD from Wergo titled Beckett Material—this interplay manifests itself, as it so often does in his work, in the implications of a tension between the aurally deliberate and coincidental. In Orchestra, for example, we hear a collection of seemingly disjointed bursts of material, brief slivers of ideas, as though Feldman had extracted a load of ‘salient points’ from a host of sources and strung them together. The result is music that constantly seems significant yet what it signifies is moot, continually reconfigured by context. In tandem with this is one’s perception of what constitutes a ‘connection’ between ideas, prompting a continual reappraisal of whether imitation and continuity are actually taking place or are imagined by-products of Feldman’s placement of materials. This extends even to something as simple as a melody; a recurring idea in all three pieces involves the irregular cycling of a small group of pitches that at first appear melodic but soon seem either arbitrary or subject to a more unpredictable type of permutation. In Routine Investigations, by far the most compositionally aloof of the three works, this is taken to an extreme, projecting a demeanour so disjunct that one’s forced to admit any or all connections may be entirely virtual and that what’s to be engaged with here is in fact discontinuity. However, there’s a commonality displayed throughout the trilogy, not just in the restraint that tends to typify Feldman’s diverse ideas but in periods of coalescence: the aforementioned cycling passages are one example, as are loud fluttering brass eruptions (Orchestra), sections of sudden rhythmic regularity and combining together for colouristic effects (Elemental Procedures), and protracted undulating chords (Routine Investigations). These have the stimulating effect of making one’s entire understanding of what’s going on feel more secure in the short term but less secure overall: Feldman not so much pulling the rug out from under us as making us realise there may not even be a rug there at all. Or, indeed, a floor. Elemental Procedures should be singled out for a special mention simply because it contains some of Feldman’s most beautiful music; his use of both the solo soprano (exquisitely performed here by Claudia Barainsky) and choir in this piece establishes a heightened soundworld articulating ecstasy. 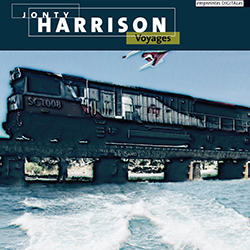 In Espaces cachés and Going / Places, two recent works by Jonty Harrison on a CD called Voyages from empreintes DIGITALes, the ‘actual’/’virtual’ interplay emerges entirely from Harrison’s use of field recordings. Specifically, the way he shapes and positions them into large-scale tapestries that exist at the delicate liminal point between authenticity (raw and untouched) and artifice (clearly juxta-/superimposed). The latter is emphasised throughout the fourteen minutes of Espaces cachés, something of an essay in qualitative shifts and jump cuts between assembled groups of sound sources. The effect is cinematic, the episodic nature of the piece resembling a sequence of discrete ‘scenes’—which somehow declare and defy their artificiality at the same time—demarcated by brief moments of disorientation. As its modest but ambitious title suggests, Going / Places doesn’t simply expand this idea, it explodes it, resulting in a 40-minute soundscape in which the structural divisions are no longer clear-cut and often themselves feel like an integral part of the activities captured in the field recordings. At its world première at HCMF 2015 i wrote about the “transparency of Harrison’s methods of collage and juxtaposition”, resulting in music that “certainly isn’t ‘electronic’, and one even hesitates to call it ‘acousmatic’”. That’s even more the case in this two-channel version, which sounds awesome through headphones (in no small part due to the fact the sounds were recorded ambisonically) and has the effect of turning one’s listening space into a vivid kaleidoscopic whistle-stop tour of the globe. But it’s more collage than reportage, and Harrison’s moulding of the recordings into complex fabrics turns Going / Places into a stunningly vivid piece of uncanny metarealism that encapsulates both the physicality and the psychology of the present experience together with aspects of memory and anticipation. 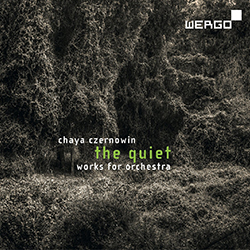 Yet another kind of ‘actual’/’virtual’ duality is explored in the The Quiet, a recent disc from Wergo presenting five orchestral works by Israeli composer Chaya Czernowin. The emphasis here is brilliantly hinted at in the cover artwork featuring a photograph by Ittai Bar-Joseph, the imagery of which at first glance is confounding: is it solid or gaseous? is it even real or perhaps computer-generated? Even the fact that the photo is monochrome is relevant. Those wanting their new music to be a paragon of crystal clarity should look elsewhere: in these works, Czernowin roams repeatedly within remarkable soundworlds where almost everything that exists does so from a default position of the most vague character. Rumbles, tappings, scrapes, flutterings, air noise and other anonymous sounds (usually impossible to trace back to a particular instrument) become a kind of granular clay from which Czernowin sculpts elemental formations that hint at, flirt with but only very rarely embrace tangibility. Of fundamental importance to this process is a parallel duality between pitch and noise. Usually in these works pitch is little more than faint streaks and stains amidst waves and clouds of aspirate noise; however, when Czernowin applies pressure to these elements they end up sounding incredibly compressed, their relative quietness no longer the product of restraint or being overwhelmed but of the sheer strain to which they’re being subjected. This becomes the basis for dramatic inner tension, finding a literal voice in a variety of ways. In The Quiet, Zohar Iver (Blind Radiance) and Esh, collectively forming Czernowin’s ‘crescendo trilogy’, the main tendency is to form surging waves (which give the trilogy its name) as well as violent eruptions. Sometimes these are the inevitable consequence of this build up of pressure, as in the climax of Zohar Iver where a generalised kind of poised energy, following a remarkable sequence that sounds like the music is being boiled from within, suddenly explodes in a huge texture of individuated counterpoint, or the immense splurge of shrill string tremolandi in White Wind Waiting that cuts through the prevailing mystery with all the qualities of a dentist’s drill. But these eruptions also come as violent responses to even the barest hint of clarity, such as the loud whip cracks that massacre a brief octave unison in The Quiet. Yet it would be wrong to represent these five works as all about the conflict between such opposite kinds of material/activity. The ‘substance’ is to be found in the vagueness and the vaporous outlines of what may or may not be the makings of a concrete idea. Colour is not entirely absent (there are ephemeral glimpses of it in At the Fringe of Our Gaze, moments that in this context sound almost absurdly luxuriant), but for the most part this is music on a black-white continuum. Where Rebecca Saunders teases out and obsesses over minutiae within such a world of shadow, Czernowin plays with the shadows themselves, setting up meandering agglomerations and misty clouds of activity that fire the imagination to perceive its own shapes within. Above all, though, this is music less about specifics than a precarious balance of forces held in a volatile equilibrium. Breathtaking.

Simon, do stop writing so persuasively about music! The Czernowin sounds so tempting…

Give in to temptation, Alan! 😉

I did! Brilliant CD, remarkable orchestral writing.
Many thanks for alerting me to this issue.