Marisa Hartanto – Rumble to the Past (World Première) 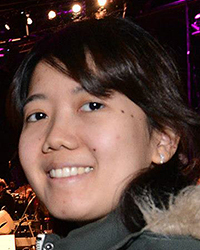 For the next work in my Lent Series focusing on miniatures, i’m turning to Indonesian composer Marisa Hartanto, who studied composition as a postgrad at Royal Holloway. Her short orchestral work Rumble to the Past won the BBC’s Baroque Remixed postgraduate composing competition in 2012. The piece is a response to Purcell’s ‘Rondeau’ from his incidental music for the play Abdelazer (by Aphra Behn, one of the first English women to have a professional career as a playwright), well-known to most people from its central use in Benjamin Britten’s The Young Person’s Guide to the Orchestra.

Hartanto’s music is initially dreamily atmospheric, characterised by shimmering strings and bright percussion, though the general tone is a disconcerted one, due to use of sul ponticello, oblique harmonies, searching tendrils of melody, and particularly by the ominous plodding pulse, the only obvious connection at this point to Purcell’s melody. Only as Hartanto slowly cranks up the intensity into yet more unsettled territory do clear elements of the tune emerge: scattered, even scared motivic fragments seemingly compelled to scarper as soon as they appear among the woodwinds. A bang, a (somewhat elegant) collapse and, via a rogue bassoon, the music enters a weird epilogue that’s superficially jaunty but beneath the surface seems positively unhinged. All but the percussion peter out, leaving harp, glockenspiel and celesta to end Rumble to the Past with vanishing motes of glitter.

The world première was given in March 2013 by the BBC Concert Orchestra conducted by Charles Hazlewood.