There are lots of exciting events coming up in the next few months, approaching new music from a plethora of different angles.

Next month the Royal Opera House will be giving the first UK performances of Thomas Adès‘ The Exterminating Angel, based on Luis Buñuel’s splendidly off-kilter movie. Premièred last summer in Salzburg, it’ll be receiving half a dozen performances at Covent Garden from late April to Early May. With a libretto by Tom Cairns, featuring the likes of (among many others) Anne Sofie von Otter, Christine Rice, Sophie Bevan, John Tomlinson and Thomas Allen, and directed by the composer, it should prove quite a spectacle. Well over a decade after witnessing the first performance of Adès’ last opera, The Tempest, i’m still somewhat in two minds about it, so it’ll be fascinating to see where he’s coming from in this new operatic work.

The Another Timbre label is taking over Café Oto for three days at the start of May, with a series of concerts to tie-in with their new five-disc set of music by Canadian Composers (a review of these is coming soon). Works by Linda Catlin Smith, Isaiah Ceccarelli, Marc Sabat, Martin Arnold and Chiyoko Szlavnics will all be featured in these concerts, plus a couple of pieces by fellow Canadian Cassandra Miller and not-remotely-Canadian Jürg Frey. Tickets are £8 a pop or £21 for the lot. 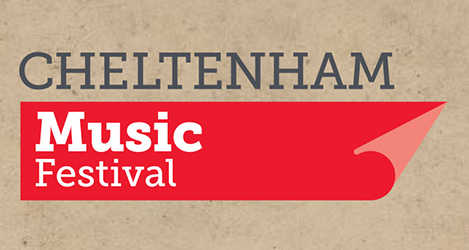 Looking ahead to July, the details of this year’s Cheltenham Music Festival have been announced this week. The festival’s engagement with contemporary music – which, let’s remember, was its original purpose – has become highly tenuous in recent years, but there’s one or two concerts to look forward to. At the safer end of the spectrum, Estonia’s E STuudio Chamber Choir will be showing there’s more to their country than just Arvo Pärt, also featuring music by Estonians Cyrillus Kreek and Veljo Tormis. As someone who’s spent a fair bit of time with Estonian music during the last year, this is going to be good (though, fair warning, you’ll also need to contend with some Whitacre). Pianist William Howard is performing a recital titled ‘Love Songs’, including works by Cheryl Frances-Hoad, Piers Hellawell, Howard Skempton, Joby Talbot, Judith Weir and Michael Zev Gordon, a number of them receiving first performances. Joby Talbot’s music is also being performed by vocal ensemble Tenebrae, presenting his hour-long Path of Miracles. And towards the end of the festival, the Piatti Quartet will be presenting music by Joseph Phibbs and Mark-Anthony Turnage plus a new work from Darren Bloom. There are other assorted new works dotted elsewhere, and as ever there’s the annual Composer Academy for early-career composers, this year being mentored by Michael Zev Gordon. 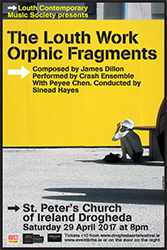 And there are some extremely interesting events beyond these shores. Next month, Louth Contemporary Music Society is presenting the world première of James Dillon‘s latest piece, The Louth Work: Orphic Fragments. A work for soprano and a small ensemble of five players, as the title implies Dillon has drawn on ancient texts attributed to Orpheus, alongside poetry from the father of the sonnet, Petrarch, Apollinaire and Beat poet Allen Ginsberg. The concert is being given by Crash Ensemble with soprano Peyee Chen, who will also be performing a rendition of the Three Songs by Ukeoirn O’Connor (actually by Jennifer Walshe), of which Chen gave a fittingly weird and wonderful performance at last year’s Alba New Music festival. Taking place as part of the Drogheda Arts Festival, on Ireland’s east coast, the concert is on Saturday 29 April in St Peter’s Church and tickets are a measly €10.

And in May there’ll be the annual Wittener Tage für neue Kammermusik, which i’ll be experiencing for the first time. This year’s sextet of concerts is jam-packed with exciting propositions: i’m particularly looking forward to three premières: Brian Ferneyhough‘s Umbrations, The Tye Cycle by the Ardittis, Paul Hübner and the JACK Quartet performing Timothy McCormack‘s Your Body is a Volume and Clara Iannotta‘s piano and ensemble piece Paw-marks in wet cement. Above all, though, it’ll just be great to have the opportunity to encounter totally unexpected music from composers whose work is entirely unknown to me. That’s definitely not something we get sufficient opportunities to do in Britain. 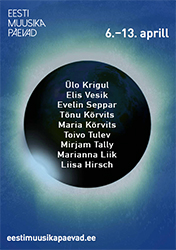 Apropos: i’ll be heading off to Tallinn again early next month for the Estonian Music Days. The festival’s engagement with new music is exceptionally diverse and forward-looking, very much more so than we usually encounter here in the UK. Among this year’s highlights: vocal group Vox Clamantis who (foreshadowing E STuudio Chamber Choir’s Cheltenham gig) will also be performing Pärt and Kreek, together with a new work from Galina Gregorieva; the first performance of Peeter Vähi‘s An April Night’s Dream for keyboards, percussion, phonogram and city sounds will be taking place in the late evening on the roof of the Estonian National Opera house(!); and the Estonian Philharmonic Chamber Choir will be giving a thoroughly eclectic concert of works by Jonathan Harvey, Ligeti and Sciarrino alongside premières from local composers Tatjana Kozlova-Johannes, Evelin Seppar and Mirjam Tally. But i suspect the biggest highlight of all will be the event given by the country’s National Symphony Orchestra, in an all-Estonian programme featuring three world premières together with the Fourth Symphony by the great Lepo Sumera as well as Erkki-Sven Tüür‘s Cello Concerto. It’ll no doubt be absolutely exhausting, but wonderful. They really know how to do a music festival in Tallinn.