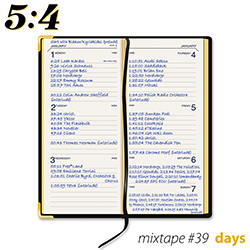 The new 5:4 mixtape takes as its theme the days of the week, charting a slow progression from Monday to Sunday. That might not sound like a particularly promising theme, but i’ve been noticing in recent months just how many tracks in my music library contain either specific or more general references to days, which led to the idea for this mixtape. Perhaps unsurprisingly, due to it being (from an aural perspective) such an abstract concept, the music in this mixtape is more than usually eclectic, but once again i’ve been able to navigate what i think is a convincing, interconnected sonic pathway through exceptionally diverse material. This exercise was revealing in the extent to which some days of the week have received a greater amount of musical attention, while others are much more neglected. This clearly has more than a little to do with our cultural experiences and exploits: plenty of music to choose from for the weekend – when we’re more likely to be away from work, enjoying ourselves – while Tuesday and Wednesday in particular provided relatively few options (though good ones).

Once again, the mixtape includes some of my favourite music, old and new, and i’ve divided it up into sections for each day, demarcated with interludes. A couple of composers appear several times: there are various excerpts from Nordvargr‘s 8-hour epic Sleep Therapy and some pieces from Gesualdo‘s Tenebrae music. i’ve drawn on my love of easy listening on a number of occasions too, featuring some delicious slices of fragrant cheese from Charlie Byrd, Orchestra and Chorus, the Polish Radio Orchestra and The Cavendish Ten. Songs of a multitude of stylistic persuasions litter the mix, encompassing electronica (Yazoo, Client, SPC ECO, Bat For Lashes, Kate Havnevik), ballad (Emiliana Torrini, Get Well Soon), dream pop (Emmy Rossum, Tori Amos, Mitski, Desire), manic pixie dream pop (CocoRosie), light rock (Chrysta Bell, Asobi Seksu), experimental chamber rock (Chrome Hoof) and lo-fi (Leah Kardos, Rose Elinor Dougall). Devoid of words but packing diverse beats are tracks from Christ., The Flashbulb, Free*Land, Cemeteries and tomandandy. At the more abstract end of the continuum, i’ve included a range of more free-form electronics from the likes of Ulrich Schnauss, Colin Andrew Sheffield, Noveller, Tetra, Saddleback (Richard Skelton), Brian Eno, aTelecine, The Noisettes and Stray Ghost. There’s also a burst of Thomas Newman‘s luscious score for Less Than Zero and a gorgeously potent movement from perhaps Per Nørgård‘s greatest symphony (No. 6) towards the end of the mix. i’ve featured a small selection from my now vast collection of renditions of Gloomy Sunday – one of my favourite songs, about which i really ought to write a book sometime. In case it isn’t obvious, Venetian Snares and Tsukimono are reworking Billie Holliday’s classic recording, in both cases coming up with something wonderful, whereas DJ Phoenix reinterprets the song within a torrent of squelch, grime and bass. And the whole thing kicks off with a tantalising six-minute introduction from Marco Blauuw & Yannis Kyriakides.

So, a highly eclectic week condensed into three hours of music; here’s the tracklisting in full, together with links to buy the music.

• Christ. – tuesday off (1999) (from Curio. volume1.)
• Yazoo – Tuesday (from Upstairs at Eric’s)
• The Flashbulb – Little Tuesday (from Réunion)
• Noveller – Tuesday before Poland (from Glacial Glow)
• Client – Tuesday Night (from Metropolis)

• Free*Land – Big Wednesday (from The Animatrix – The Album)
• Emiliana Torrini – Wednesday’s Child (from Love In The Time Of Science)
• Charlie Byrd, Orchestra and Chorus – Any Wednesday (from Hollywood Byrd)

Nope – i don’t actually own any of Licht!

Neither do I, in fact. But I did like what I heard from it in the past, so maybe I ought to check it out. After having listened to your mix tape of course.

Personally, I’m not sure whether to feel relieved or disappointed that you’ve managed to avoid both New Order and The Cure…

Oh, believe me, i did agonise a bit, especially over Blue Monday! But in the end i found it more interesting to explore less obvious choices 🙂

Ah, I suspected as much! Likewise, given that the name of the game is presumably the contrast between weekdays, I guess it would have been a little perverse to have included Morrissey in the “Sunday” section.

Well, i wouldn’t exactly describe myself as a fan of Morrissey in any case!

So The Smiths were always more about Marr’s guitars (and the other two’s oft-underrated contributions) for you, then..?

I’ve always been pretty indifferent to The Smiths generally. I actually revisited all their albums about a year or two ago, and there’s really only a handful of songs that stand out. The whole Morrissey-Marr talent hullabaloo is a big red herring. Can’t we just settle on them both being ‘perfectly adequate’?

…more than Morrissey’s clever-clever-overgrown-adolescences and “Marmite” voice, that is.

I dunno, the hyperbole they attract isn’t quite as wide of the mark as for some Manchester acts (The Stone Roses, for example….and as for bloomin’ Oasis…!) – Marr was, it’s fair to say, very young to have coined an instantly recognisable signature “sound”. But yes, How Soon Is Now? is about the only Smiths song that I’d consider indispensable, and even that’s as much to do with Joyce’s near-breakbeat as it is the guitars and vocals.

But anyway, enough of this airy persiflage- on with the mixtape…!

For me, i’d rank ‘Girlfriend in a Coma’, ‘Ask’, ‘The Queen is Dead’, ‘The Boy with the Thorn in his Side’ and ‘There is a Light that Never Goes Out’ as the only really indispensable Smiths songs. Love them all. (Call me a heretic, but i very much prefer t.A.T.u.’s version of ‘How Soon is Now?’)

Personally, i don’t regard it as hyperbole where The Stone Roses are concerned – that first album of theirs is pure genius. But as for the rest of ‘Madchester’, it’s always left me almost entirely cold.

It sounds like our respective “Indie” wavelengths are close, but nevertheless subtly different. The Stone Roses was an album that I worshipped at the end of the 20th Century, but this century? Maybe it’s the countless imitators over the intervening years muddying the waters, but its soundworld really doesn’t seem that remarkable to me with hindsight, whereas those conjured up on roughly contemporary albums such as (weekday alert!) Happy Mondays’ Pills ‘N’ Thrills And Bellyaches, Primal Scream’s Screamadelica, even (Lord ‘elp me!) Jesus Jones’s Doubt, seem to have a much broader reach. Plus, I tend to have an innate suspicion of any band who can only muster up one unequivocally good long-player (although Second Coming certainly has its Zeppelin-esque moments). Perhaps I need to do as you did with The Smiths’ albums and set aside some time to reappraise The Stone Roses. Before any of that, though, to echo Kjeld, I need to give this mixtape a spin or several…

In terms of ‘wavelengths’, in my case, while i’d like to say it’s solely to do with discernment, it’s also to do with my instinctive resistance to anything that to me seems too instantly-accepting as a result of fandom. Let me explain what i mean (and hope this isn’t boring to relate). As a teenager from the mid-’80s, there were various subcultural cliques at my school, each obsessed by different musical foci. So, to name but a few of the most memorable, one was mad keen mainly on The Wonder Stuff, Pop Will Eat Itself, EMF, Carter the Unstoppable Sex Machine and all that grundgy rock/pop, another on the goth bands – Sisters of Mercy, Fields of the Nephilim, The Mission, Siouxsie Sioux – yet another on The Cure, The Smiths and the more ‘heartfelt’ end of pop, and yet another on the multifaceted Madchester scene. And of course there were oodles of others, but mostly more mainstream.

Of course, a Venn diagram of these groups would produce some overlaps of both interest and membership (the goths all liked The Cure, and the Wonder Stuff fans all loved James, for example) but for the most part, they were pretty disconnected from (and somewhat antagonistic/supercilious toward) each other. And for me, while i had chums in all these cliques, my resistance to ‘sign up’ to a particular brand of musical fanaticism – partly because my tastes went significantly wider than these groups’ relatively narrow purviews, and partly just because – meant that i ended up picking and choosing pretty severely from all these bands.

This is, essentially, how i’ve always been (if i have anything approximating a decent critical musical faculty today, it’s no doubt down to this outlook), and as a result my liking of all these bands is of a quite extreme ‘pick-and-choose’ persuasion. The tracks by The Smiths that i mentioned are, in fact, the only ones by them that i own – i never bought the CDs/vinyls at school and in more recent years opted to buy just the songs i actually liked. And the same’s true for all the rest of that stuff. So perhaps this is all a horrendously long-winded way of saying that i don’t think i actually have a ‘wavelength’ for these things at all, it’s less tangible than that.

*SIGH* i started writing this knowing exactly what i wanted to say. Now that i’ve reached this point, i’m really not sure any of this articulates something concrete in response to what you said. Perhaps i’m just stressing the point that i don’t think i really have a ‘taste’ for these kinds of music specifically, i just look and listen around at what’s going on and every now and then my ear alights on something that it and my brain together go all doolally about. Like The Stone Roses’ first album. i’m not in the least fussed if someone can only come up with a single decent album, any more than i’m fussed if a composer can only come up with a single decent composition. If i like something, i like something; i know that’s glib, but it’s true and all i know is that it’s an attitude that, at its core, cares very little about all the extra stuff beyond the sounds that it’s actually making.

And if this is all the most indulgent rambling nonsense, i sincerely apologise!

No, that all makes sense to me. It tells me things that I guess I’ve probably always understood implicitly about the broad sweep of your likes and dislikes, but are nevertheless nice to have confirmed! Speaking as someone who frequently finds himself hidebound by the various species of received wisdom out there, just as your schoolmates were, the freedom you exhibit is enviable, maybe something to aspire to, and in the meantime gives your readership plenty of fascinating stuff to listen to that they wouldn’t otherwise have discovered. I’m sure I speak for all of us when I say that we owe you a big debt of gratitude as a result.