Regular readers of 5:4 will know how fascinated i am by the music of John Wall, and the last couple of months have seen two new releases featuring Wall alongside some his most long-standing collaborators. 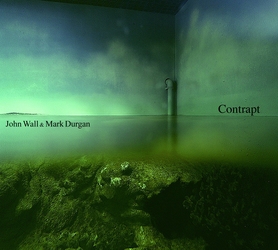 In collusion with Mark Durgan is Contrapt, a 39-minute sequence of pieces culled from free improvisations the duo made over a three-year period, from 2012 to 2015. In Wall’s case, ‘culled’ would seem to be precisely the right word. i’ll say more about this when discussing the other disc, but the fact that three years’ worth of improvisations can be distilled down into not much more than half an hour says something to the way in which Wall approaches the editing process (in all of Wall’s collaborations, he is responsible for the editing of the material).

There are instances, particularly in Wall’s more recent output, when the different tracks on a disc can feel disconnected from one another, like separately-filmed scenes placed side-by-side to form a movie demarcated by jump-cuts. But not on Contrapt. Here, the seven tracks become segments of a larger, integral whole, cross-referential both specifically (in terms of material) and generally (behaviour and timbral palette). One of the most striking qualities displayed throughout the disc is physicality. Electronic music so often sounds like what it is – a stream of 0s and 1s that, whatever their lineage may be, reside within and emerge from the processing circuits of a computer. But throughout Contrapt there’s a vivid sense of objects (whether real or virtual) being wielded, handled, struck and otherwise manipulated, sometimes shape-shifting into tubular noise formations, substituting impacts with turbulence. As ever, the relationship between pitch and noise is a fascinating one. It’s easy to focus on the fragmented, filigree surfaces, or get swept along on the torrential streams of burbling grit and glitter (which i’ve previously likened to ‘alien data’) but within and around them broader sonic events take place. Underlaid low tones appear in the eponymous first segment, distant and ephemeral but present nonetheless, whereas in ‘Rapt’ pitch is used more overtly, forming lovely gliding tones that spiral spontaneously out from the main texture before being absorbed back into it. Sometimes what Durgan and Wall are up to can sound a little self-involved, concerned more with cause than effect; at these times there’s a distinct sense of ‘looking over the shoulder’ of the music in order to seek to connect with it (demonstrating that an avoidance of received notions of musical engagement can militate against as well as liberate). But this is a passing issue on Contrapt, and the more effusive music that typifies the disc – especially the varying forms of regular and irregular pulsation that keep recurring – as well as the abrupt shifts in character that often occur late in a segment (something of a John Wall fingerprint) keep one hooked. Contrapt is a CD-only release, available from Harbinger Sound. 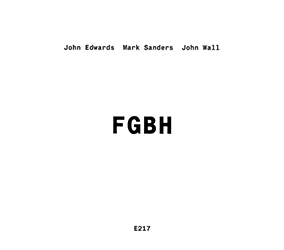 The track titles on Contrapt gradually diminish – removing one letter each time, from ‘Contrapt’ to just ‘Pt’ – and this process of systematic reduction is in keeping with John Wall’s general approach to the editing of material, particularly on FGBH, his new collaboration with double bassist John Edwards and percussionist Mark Sanders. i first heard a rough draft of this album in January, when it comprised eight pieces (A–H), lasting 36½ minutes. Even as a draft, it was highly impressive, so it was somewhat alarming to hear that Wall was determined to condense and distill it further. Sure enough, barely a month later, Wall had edited it down to just four pieces (F-G-B-H), now lasting just over 20 minutes. This compositional method of Wall’s – always chipping away, determined to elide anything that might detract from or otherwise obfuscate the music’s pellucidity, clarifying it into a concentrated aural essence – is something that, as i’ve got to know him and his practice better over the last few years, never ceases to amaze me. The courage it requires is all the more apparent having heard that early draft of what would become FGBH. As it happens, my own assessment was that three of those four sections were easily the best (i had doubts about ‘F’), but abandoning ‘C’ – which you’ll have to take from me was a thrilling 2½-minute exercise in distressed timbral tension – was an audacious decision. i’ve often reflected on how Wall’s aggressive, painstaking ‘cooking’ of the material seems a world away from the raw improvisations from which the material sprang. Yet i’ve come to realise how, in fact, it’s a continuation of the improvisation, Wall playing with the material further, gently massaging its plasticity into a final sculptural form.

As far as FGBH is concerned, its final form is utterly dazzling. Those doubts i’d harboured about ‘F’ are now dispelled, it has an extremely palpable sense of both immediacy and proximity, as though the trio were performing just a few feet away. The activity is busy but not fraught, and undergoes a similar shift later on to that which i mentioned above, settling into final repetitions that transition from acoustic to digital at the end. It’s a small shift but it makes one question a great deal about the nature of the sounds being heard. Both ‘G’ and ‘B’ are more heavily restrained, as though subject to considerable external weight compressing the sound. ‘G’ utilises a polarised pitch domain, emphasising very high and low (another Wall fingerprint), before slowly growing into an intense texture full of rapid sonic impacts, both acoustic and synthetic. ‘B’ opts for an indistinct quietness, save for a bell-like chiming, thereafter becoming highly tactile – hyperreal even – the sounds now seeming to hover just inches from our ears. Electronics play a very different role in these two pieces: in ‘G’ they take a back seat, allowing Sanders’ complex elaborations space to move, while in ‘B’ they’re very much more strident, piercing through the percussion and the slapping, plucking and grinding of Edwards’ bass until they assume the foreground – though once again physicality is emphasised, making a semi-imaginary but plausible connection back to the world of acoustic sources. The final few seconds, chattering data punctuated by dull thuds, are pure electrified magic. ‘H’ is both the longest and the most dramatic of the four. Wall makes the displacement of sounds especially striking, keeping bass and percussion in the centre, assigning his electronics to the extremes of left and right, thereby allowing everything to be apparently in the spotlight yet where nothing is crowded out. The dynamic and behavioural range displayed here are enormous, often exhibiting restraint but letting loose in the most frantically exuberant material, all three parts uncannily working in absolute sympathy with one another. Having said that, while the balance of elements is perfect, the actual sense of balance in the music is a precarious one, continually tilting such that it retains (or recaptures) that edge-of-the-seat white heat when the trio were actually improvising. A rare, exhilarating, unmissable treat for the ears, this is easily one of the best things i’ve heard in 2017. The CD, released on Entr’acte, is already sold out but FGBH is available digitally via Bandcamp.