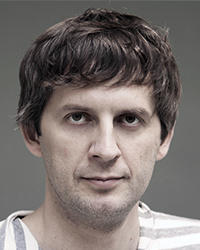 Some make their journeys alone.
Others get together, as couples or in small gatherings.
They connect and they divide. This may seem unpredictable.
But you can guess which paths they will take.
In the end, most of them follow their forebears.
It’s gravity, apparently.

While some composers persist in providing lengthy diegetical tracts to explain their compositions, at HCMF 2016 Polish composer Marcin Stańczyk provided the above text to accompany the first UK performance of his piece some drops… for double-bell trumpet and ensemble. As i’ve got to know the work better since that first encounter, these words have made more and more sense. Stańczyk initially places the solo trumpet at the back of the space, behind the audience (“Some make their journeys alone”). But as the work progresses, the soloist slowly walks forward, eventually joining up with the rest of the ensemble, which is itself continually reforming into different groups (“Others get together, as couples or in small gatherings./They connect and they divide”).

The lines that then suggest that the apparent unpredictability can be guessed are, i think, more subtle than simply suggesting that we as listeners can work out what’s going to happen and when. That certainly isn’t the case, and to my mind this is more about the nature of the material being explored throughout the piece which, as i said in my original review, seems to be “teetering at the cusp of letting loose something warm and familiar”. This seemingly comes from nowhere, emerging in the wake of the work’s opening minutes where a strange pulse is set up, with sporadic single-note chirps from left and right. Is it sinister? vague? preparatory? Whatever it is, it’s at something of a distance until around three and a half minutes in, when the weird sense of a (neo-)romantic musical urge starts to exert itself, nothing more than a rising 3-note motif that might be the beginnings of a melody. Stańczyk ever-so-gently reinforces it with a pizzicato double bass, but it ends up becoming lost in the haze that characterises this portion of the piece.

Yet this is in essence something of a demonstration of everything else that will follow. The work moves at its own inscrutable speed back and forth between sequences of tantalising vagueness – occupied by drifting textural croaks, growls, tappings and brushings – and passages that, as here, suggest and allude to something that’s not just more coherent but positively familiar, like an echo of something from our collective past. It’s an incredibly potent effect yet the way Stańczyk does it is so understated that you question whether its the music or you that’s putting the idea in your head. A definite case of musical sleight of hand. Sometimes it’s nothing more than the unexpected occurrence of a widely-spaced major third, or a collection of repeated pitches that transfix the music, like an infinitely gentle ecstatic reverie. The opening motif is more demonstrative than this, as is the work’s most overt period of focus, where the music is kept in alignment by a drum kit. When i first heard the piece i regarded this section as a misstep, yet now i recognise it as an integral part of this interplay of allusion and illusion. Even more so some minutes later, when the pulse evolves into what sounds like a slowed-down version of the drum machine from Kraftwerk’s Autobahn.

All of this is entirely in keeping with the dream-like state of the piece, where we continually glimpse things that may or may not actually be in the space (possibly conjured by our memory or imagination), a slow procession of fragments and figments of ideas that’s decidedly weird though without being unsettling, and certainly not threatening. It ends up in a sparse atmosphere of vibes and fluttering/sliding trumpets, subsequently shaped by a barely perceptible descending bassline riff, like a spaced out or washed out blend of noir and futurejazz (only enhanced by the sound of rain in this performance, which i can’t recall is real rain falling on the roof of the building or part of the performance).

Is this recurring sense of something half-familiar lurking beneath the surface, also manifested in the gradual but inevitable reuniting of the trumpet soloist with the rest of the ensemble, evidence that “In the end, most of them follow their forebears”? and is that remark directed at composers, performers or audiences? and is it a criticism or simply an observation? There’s an implied fatalism in those words, yet Stańczyk qualifies this with his reference to gravity in the last line. This implies an inevitability based on the nature of things, if they’re allowed to progress without being impacted upon by additional forces. So maybe the remark is aimed at all of us, simply stating and demonstrating that we tend to stick together, tend to go creatively where we’re most naturally inclined to go, tend to formulate things in light (or in spite) of our predecessors. If this is Marcin Stańczyk’s theory of gravity, i don’t read it as necessarily critical, and besides, the way he presents it is itself sufficiently vague to leave one with as many questions as those posed by some drops….

i think it’s marvellous that, almost a year since i first encountered this piece, i still find myself navigating and making sense of it, hearing new suggestions emerge from it and discovering new points of connectivity within it. One of the strangest but most lovely pieces performed at HCMF in recent years, it’s also by far one of the most evocative things i’ve ever heard—yet precisely what it evokes, and what those evocations mean, is probably unique to each and every listener.

The UK première of Marcin Stańczyk’s some drops… took place on the opening night of HCMF 2016 in Bates Mill Blending Shed, performed by trumpeter Marco Blaauw with Ensemble Musikfabrik.