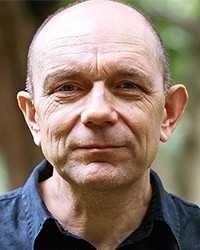 One of the awkward aspects of attending the Huddersfield Contemporary Music Festival arises from the fact that, when choosing which concerts to attend, there’s an unavoidable fear that one will inevitably miss something fantastically memorable and/or stunningly ground-breaking. The next piece in my HCMF revisitings is a case in point, from a concert i ended up kicking myself for missing in 2013. The work began life in 2002 as Movement for Ensemble, composed for Dutch ensemble Orkest de Ereprijs who presented it at that year’s Gaudeamus Music Week. The following year another Dutch group, The Ives Ensemble, commissioned a slimmed-down version of the piece for a series of performances in conjunction with Rotterdam Dance Works, whereupon it became Movement for 10 musicians.

The entire piece is made from just three very basic ideas:

It unfolds like a cross between Ravel’s Bolero and Howard Skempton’s Lento. Crane repeats the first two of these ideas numerous times in groups of 2, 4 and 6, but despite how obvious these repetitions are, and the structural blocks they form, the piece is not first and foremost about this. Harmony is what ultimately demarcates the work’s overall structure, which falls broadly into four sections. Crane positions the music at a cadential liminal point, founded upon a tonality of E – floating between major and minor – with regular suspended fourths and sevenths that push and tilt it towards the key of A. Three of the work’s four sections do actually end with this cadence, though the way the chord of A is rendered – enriched with sevenths and ninths, but lacking a major or minor third – lends it both a harmonic conviction and neutrality that are entirely in keeping with the tonal fluidity that pervades the piece.

The third idea only appears twice, following the first two of these cadences, resetting the tonal centre back to E and extending the shift to A respectively (though in the latter case, the emphasis on E – beginning and ending the rising scale – also acts to reinforce the subsequent return to E that follows). There’s something haunting about these scales, as though an uncanny external force had been brought to bear on the music, temporarily holding it in suspension. Crane doesn’t use it at the start of the final section, which instead functions as a plateau, a high but level point where the second idea – which is the only one used in both the third and fourth sections, triumphantly demonstrating what you can achieve with very little material – is stated in pairs, with alternating small and large orchestrations (apropos: the number of instruments playing through the first three sections gradually increases). There’s a transfixed, translucent quality here that’s strongly redolent of Feldman, and in much the same way the ‘inverted climax’ it creates – restrained but radiant – forms a perfect conclusion to the piece.

Movement for 10 musicians is one of the most engrossing pieces i’ve ever (not actually) heard at HCMF, and in the course of spending time with it my scribbled notes ended up becoming a detailed analysis of the work’s musical structure. This might be useful as a listening aid, so i’ve made it available as a PDF below.

This performance of Laurence Crane’s Movement for 10 musicians was given during the closing weekend of HCMF 2013 in St Paul’s Hall, by the Oslo Sinfonietta conducted by Christian Eggen.

I’m so glad this was recorded. I love his music so much and this may be one of his best pieces