To conclude this weekend i’m returning to the music of Helena Tulve and to another world première, which took place last November during one of Estonia’s main contemporary music festivals, AFEKT. A 17-minute work for saxophone, percussion and piano, in a way all one needs to say about it is encapsulated in its title, The Night-Sea Journey. The music is entirely directed toward the implied narrative of that title, inhabiting a nocturnal world of shadows and moonlight, progressing – in my mind, anyway – across water. At least, that’s one way of hearing it, taking the title literally.

Heard in this way, the piece conjures a foreboding, difficult soundworld. It wouldn’t be inaccurate to describe its music as lyrical – it is, abundantly – yet of the blackest, most brooding kind, drenched in uncertainty and anguish. Initially, there’s a sense of the trio huddled together, not so much playing as making tentative suggestions: a simple piano idea based on oscillating octaves, air noise through the sax, soft suspended cymbal rolls. It doesn’t seem to add up to anything at all, yet in light of where the piece goes from here, in hindsight it’s like lighting a touchpaper.

A slow-burning one, though: one or two wild, individual gestures are thrown out, and the music gradually expands but is qualified by sounding increasingly uncomfortable, as if all three players were weighed down by some colossal external pressure. Trills that keep occurring end up sounding like ideas that can barely speak due to being crushed. The music has a weirdly post-romantic flavour, as though its gestures and language were rooted there, but have become strained and distorted. The sax, in particular, is evidently the primary mouthpiece of the trio, but has a tendency to resort either to placing pitches such that they don’t really feel connected, or repeating them insistently, in lieu of something more articulate. Melody, at this stage anyway, does’t appear to be an option, restricted to a kind of inhibited ruminating. It’s a fascinating combination, the implied lyricism and emotion underlying all of this, articulated in such an afflicted, abrasive way. 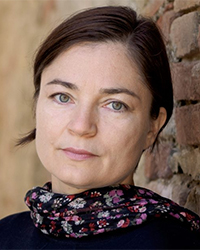 Both of these aspects subsequently become pushed to extremes: a little over halfway through, having passed through a strange, metrically pounded sequence (the one time in the piece where a pulse feels even remotely present), answered by a blurt of more rude sax notes that make one wonder if there’s any room for this music to breathe at all, the trio unleashes an extraordinary extended episode. It begins by breaking up the pattern from before; having come and gone in waves in which the players were united, now those waves are more complex and individuated. An immense outpouring follows, like a broken, agonised keening dominated by the sax riding over pianistic heft and percussive splash. It’s enormously passionate, though it’s the passion of heartbreak, an extended plateau of pain that sees the saxophone – one imagines in desperation, or perhaps simply becoming completely unhinged – finally move beyond repeating notes into out of control articulations, which finally become drowned in increasing swells from the other two players.

The way The Night-Sea Journey concludes is unexpected and stunning. In the wake of that massive episode, the music necessarily dies down, becomes vague, and for a time takes on an air of improvisation, the players – similarly to at first – listening closely to each other and making sounds tentatively. The sax, underpinned by marimba tremolandi, rekindles just a hint of its earlier full-blooded power in short bursts that become somewhat extended into beautiful but harrowed tendrils of echo. And then, from nowhere, a spellbinding melody – sax, bowed vibe and whistling (from the pianist) in octaves – rings out like a slow, sombre chant of resignation, with occasional low rumbles from somewhere. i can’t recall hearing anything quite as genuinely spine-tingling as this in a long while, and it brings the piece to an eerily uncanny end.

As i said at the start, it’s possible to listen to this piece reading its title literally and it takes one on a vivid, unsettlingly dark journey. But i can’t help wondering whether Helena Tulve is also making a connection to Carl Jung’s notion of the ‘night sea journey’ as a psychological voyage through depression, which he characterised as a descensus ad inferos: “a descent into Hades and a journey to the land of ghosts somewhere beyond this world, beyond consciousness, hence an immersion in the unconscious”. Listening with this in mind heightens its claustrophobic atmosphere yet further, making the apparent inescapability of the soundworld and that crushing weight that features so heavily (literally) within it seem all the more understandable – yet arguably more terrifying. (For yet another slant on it, i’d recommend reading John Barth’s short story ‘Night-Sea Journey‘ in his 1968 collection Lost in the Funhouse.) Whatever extra-musical baggage one brings to The Night-Sea Journey, though, the directness and immediacy of the music are sufficient to make what it conveys, emotionally at least, abundantly clear. In some respects it’s a tough, even distressing, experience, but that doesn’t in any way diminish its beauty or its mesmerising power.

The world première of The Night-Sea Journey was given at Festival AFEKT on 1 November 2017 at the Estonian Architecture Museum in Tallinn by Trio Accanto, Marcus Weiss (saxophone), Nicolas Hodges (piano) and Christian Dierstein (percussion).