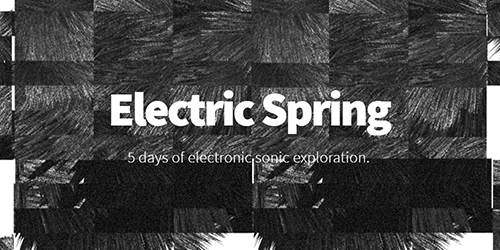 Huddersfield is supremely talented at providing distractions (and shelter) from the vicissitudes of winter: HCMF does the honours at the start of the season, in late November, whereas at the other end, in late February, it falls to the university’s annual five-day festival of “electronic sonic exploration”, Electric Spring.

There are various reasons why over the last few years i’ve grown to love Electric Spring. First, it’s the mix of familiar and – most often – unfamiliar names: at most festivals one encounters the same composers again and again, and it’s exciting to have minimal use for one’s expectations. Second, it’s a festival that’s prepared to take big risks: of course, they don’t always work, but its preparedness to go places and try things fearlessly is so admirable, and whichever way the results go, they’re often spectacular. Third, i’ve rarely encountered such inordinate attention to detail in concert giving: everything from the sound system – based around HISS, the ultimate wet dream for surround sound enthusiasts – to the lighting to the stage presentation and everything else is always carefully considered and clearly matters enormously to everyone involved in putting the festival on. And fourth, which only makes my third reason more remarkable, all of the concerts are free, making Electric Spring, besides all else, an amazing act of generosity.

This year’s festival, which took place from Wednesday to Sunday last week, lived up to everything i’ve just said. Three of the four evening concerts were preceded by opening acts, though in contrast to some previous years they felt much more integrated into the concert as a whole, and in some cases outclassed what followed. The most extreme example of this came on Friday evening, when the, frankly, mind-boggling pretension executed by the trio of Rodrigo Constanzo, Brian Crabtree and Angela Guyton – a stream of interminable music, incomprehensible text and inconsequential lighting – was utterly trounced by Owen Green‘s opening performance with nothing more than a well-rosined bow and the edge of a cardboard box. Not the most promising of resources one might think, yet the sounds Green elicited from his box, amplified and given some gentle, defiantly unextravagant processing from a laptop, was astonishing. Titled Neither the Time nor the Energy, it was a superb essay in the potentialities of friction, one that proved as engrossing in the moment-by-moment shifts in Green’s seemingly never-ending palette of sounds as it was convincing in its overall structure. Easily one of the more unforgettable performances i’ve witnessed in recent years. 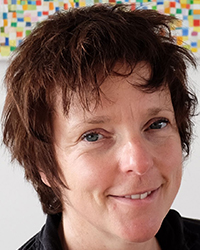 The other days’ concerts proved more balanced, moving freely between electronic, electroacoustic and audiovisual works. On Wednesday, pianist Philip Thomas gave the UK première of Rozalie Hirs‘ Meditations, a curious piece mingling prerecorded piano sounds (with an interesting range of qualities, some very lo-fi) with live performance. There was something quietly flamboyant about it, and though its strange stop-start structure lent the piece a hiccuping quality – for a time, rather fascinatingly coming to resemble a sequence of suggested endings – the piece maintained a lovely atmosphere; it was as if Thomas were playing within a snowglobe, his notes and chords causing ripples to radiate outward, sending motes of sound swirling around the space. Aaron Cassidy‘s new electronic work I, for example, … left me pondering lots of things, both about the work itself as well as its broader place within Cassidy’s output. Taken on its own terms, it was typically arresting, developing from infinitesimal chaotic burblings into a robust, effluvial torrent; it fell short of the ferocity Cassidy seemed to be aiming for, and there were long stretches when all detail seemed lost in an undifferentiated miasma, but the work’s conclusion brought an unusual kind of clarity through an apparent ‘modulation’ of the material, possibly by a voice. Definitely a work that needs further listenings. 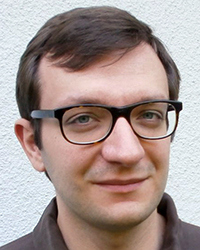 i could have done with about 14 minutes less of Thomas Meadowcroft‘s 15-minute Plain Moving Landfill, a random meandering between assorted percussion instruments so relentlessly dull that it made a trip to the local landfill site feel like a more favourable proposition. Soloist Colin Frank deserves kudos for maintaining serious composure in the face of such dismal material, but he outdid himself alongside Philip Thomas in the UK première of Luc Döbereiner‘s infinitely more engaging and profound Metallurgie. Initially like a series of sonic choreographed movements – each of which was distinct from and somehow very much more than the sum of its physical movements – it developed into an ongoing environment of flux, teasing out ever-new permutations, timbres and gesture from Frank’s thundersheet and Thomas’ piano. It lasted barely 12 minutes, but so completely enthralling and immersive was the soundworld created here that i could have easily spent an hour or more within it. Quite wonderful. 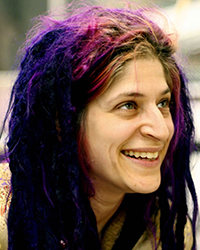 i can imagine that Kathryn Gray‘s performance, opening Thursday night’s concert, might not work for everyone. Titled Impress Maude, Part 1, Its mixture of processed vocalise and tangled electronics was both alluring and annoying at different points, though its overall demeanour – a kind of noisy, stylised, orgiastic folk ritual, gently evocative of ’60s occultism – ultimately won through. In Sam Gillies‘ Infinitely gentle, infinitely suffering, receiving its world première, music and film combined to create a beautifully-judged blurring of recognition and unfamiliarity. A visual triptych of superimposed images – one seemingly static, the other containing occasional movement – worked as a sublime analogue for the music’s steady state mixture of a quite heavy, even dark ambient, atmosphere with lighter, quicker elements dancing on its surface.

But Thursday evening was overwhelmingly dominated by Canadian artist Freida Abtan‘s astounding audiovisual work the hands of the dancer, created in 2008. It was utterly mesmerising, utilising a visual language that perfectly captured the dream-like instability of the work’s underlying theme, exploring the “the logic of dream narrative”. The somewhat low-resolution processing of the film (focusing on the physical movements of dancers) brought to mind the similarly low-res graphics deliberately employed by David Lynch for the dream-like ‘other place’ in last year’s third season of Twin Peaks. In Abtan’s work it created a similarly uncanny world fashioned out of liquid metal and fire, with a suitably attractive yet complex accompanying electronic score. In fact, this work was so good, and made such an enormous impression on me, that i confess i was unable adequately to engage with the work of hers that came after. In many respects, though less hypnotically focused Flight of Birds (remix) was arguably an even more beautiful piece – but i really need another opportunity to experience it when Abtan hasn’t literally just blown me away.

The final concert, on Saturday night, came as the culmination of the two-day Ambient@40 conference that Monty Adkins and i had devised, and featured various composers who had taken part. Obviously i can’t speak to the qualities of my own contribution, presenting somewhat time-compressed versions of two of my indeterminate electronic works, February 12, 2013 and February 24, 2013. As to the rest, the duo of Bartosz Szafranski (guitar) and Agata Kubiak (voice and violin) created in Six Spiders an interesting soundworld of stillness, punctuated by Kubiak’s voice in a way that made for a nice tension between vagueness and specificity. Rupert Till‘s Reverie Dub was a slice of purest ‘new age’ ambient, all drones, flutes and sounds of the sea (the only things missing from Phipps Hall were crystals and some sandalwood), whereas in Viking Bagpipe Dub Till channelled/resurrected the spirit of ’90s ambient house so authentically that i felt like a schoolboy again. Kristina Wolfe‘s Speaking with Stones, a world première, was a forceful exploration of ambient from the perspective of a dronal core, around which varying quantities of intensity accreted and coalesced; it can be difficult to maintain such bright focus for as long as this without causing either the music or the audience to wilt, but Wolfe managed it well. 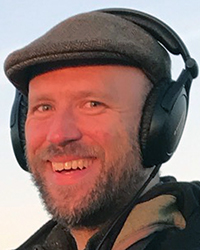 i was impressed most by the two audiovisual works in the concert. Sarva Mangalam!, created by musician Tim Howle and filmmaker Nick Cope, explored a similar habitat to that of Sam Gillies on Thursday, here establishing a behavioural stasis shaped by the arbitrary wind-buffetings of Tibetan prayer flags that attained a level of peace inversely proportional to the gusts captured on film. Rob Mackay‘s Flight of the Monarchs went further, offering cinematic insights into the migration of monarch butterflies from Canada to Mexico. These insights were more than just artistic: in addition to film of the butterflies’ movements in conjunction with Mackay’s restrained and inviting music, the work incorporated a live audio stream from the forest in Mexico where the filming had taken place. What this added to the experience is hard to articulate, but the knowledge that we were, at that very moment, connected to a place over 6,000 miles away said something of the deeper connection Mackay was seeking to make between the natural world and the creatures that inhabit it. The combined effect was lovely: sometimes the only way to respond to beauty is with beauty.

[…] i first encountered Aaron Cassidy‘s I, for example, …, a few months back at the Electric Spring festival, i was left somewhat crestfallen, resigned to the fact that it was “a work that needs further […]