In continuing my survey of recordings of Rebecca Saunders‘ music, i’m turning my attention now to works that are earlier than everything i’ve explored so far. Stirrings Still, released in 2008 on the Wergo label, is an excellent survey of what we might call (for now, at least) ‘mid-period’ Saunders, featuring five works dating from the period 1999 to 2006. It’s interesting to note the aspects of similarity and difference between these pieces and her more recent work.

The Duo for violin and piano was originally composed in 1996, revised three years later, and its main concern, rather than on a specific musical idea or gesture, is on the nature of the relationship between the two players. In this regard, it can’t be insignificant that the work’s original title was A thin red line – making it the third work of Saunders’ to feature a colour in its title, after CRIMSON – Molly’s Song 1 (1995) and the under-side of green (1994) – as this original title, with its clear connotation of courageous, indefatigable military resistance to attack, is quite clearly paralleled in the roles taken by the violin (protagonist) and piano (antagonist). However, in changing the title to Duo, Saunders makes a much more subtle point: a duo is definitely what they are, but what they never do is duet.

Which is not to suggest that the work presents a simple black vs white, chalk and cheese kind of musical dualism, but their interactions are often far from sympathetic, to put it mildly. The violin has an instinct towards restraint and lyricism, while the piano is all aggressive ebullience to the point of violence. The uncomfortable nature of their interactions is apparent even from the opening moments of the piece, and the outworking of this involves shifts, compromises, ramp-ups and climb-downs from both sides, most notably in the ways the violin is compelled to assert itself with much more force, and in the piano’s attempts (if that’s really what they are) to be ostensibly sensitive to the violin’s material. The way Saunders makes the music halting gives the impression of the two players trying to size each other up, considering both what to say next and how to say it. With minimal success, it seems: the climax is nothing less than a full-blown argument – as close as the work gets to an actual ‘duet’ between the players – culminating in lots of accents and incessant repetition, as though the two had locked horns (the occasional pauses that still recur now sound very tense indeed: active silences, full of meaning) until the pianist savagely slams its lid down. The coda, soft and painful, renders the two players more separate than ever before, independently licking their wounds. 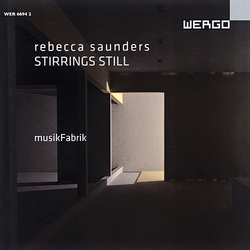 If the Duo, a relatively early work, presents a clearer kind of narrative than one usually encounters in Saunders’ music, the remaining pieces on the disc are closer aligned with the musical language of her more recent work. Vermilion (2003) a work for B♭ clarinet, electric guitar and cello, is a case in point. Initially it sounds like it’s going to be another piece obsessed with a single pitch, the trio proffering halting ideas while clustered around an A, though Saunders immediately renders them unstable, causing them to slide away. If there’s a pitch focus at all, it’s a roaming one, the trio moving so closely as to feel bound up together, at different points huddled or lashing out or keening or trembling. This vulnerable character that the trio exhibits seems strongly associated with the silence that recurs throughout Vermilion: these silences aren’t merely palpable, they’re an enormous contrast, not remotely ’empty’. There’s a sense of looking directly and deeply into something infinite during each silence, and it’s hard not to hear the trio’s extreme (re)actions around them as nervous, a mixture of being frightened and not knowing how to interact with it (not unlike the opening scene from Kubrick’s 2001: A Space Odyssey, when the apes encounter the monolith). Establishing complex relationships with and explorations of silence is a key trait and theme of Rebecca Saunders’ music, and in Vermilion silence becomes something uncanny and imposing, a kind of inverted mystical ‘uncloud of knowing‘.

blaauw (2004) for double-bell trumpet, a homage to Ensemble Musikfabrik’s trumpeter Marco Blaauw, is a kind of ‘road test’ for the instrument, given an attractive halo via sustained piano resonance. Articulated as a sequence of discrete phrases with shifting timbres and gestural characteristics – some emphasising particular pitches, others switching to essentially unpitched sounds – the effect is not unlike an algorithm being put through its paces, each time creating akin but unique results. Stirrings Still, composed in 2006, is another of Saunders’ ‘collage’ works, this time for five players, alto flute, oboe, clarinet in A, crotales and piano. Despite the titular similarity to Stirrings, it’s distinct from that piece, and murmurs too, due to being more demonstrative. That’s almost a laughable word to use for such delicate music as this, but set beside the often infinitesimal softness and distance of those other works, Stirrings Still is positively loud by contrast. Furthermore, the effect of the ensemble, though again individuated, is cohesive here, combining to form a strained kind of unified song, continually melodic yet bewildered and askew.

The final work on the disc is Blue and Gray, a work for two double basses composed in 2005. There are distinct hints of the double bass writing that permeates traces (composed the following year): buzzing and slithering, sharp punctuating accents, intense grinding and clattering pitches resulting from heavily detuned strings. There’s also something of the Duo: are the basses working together or are they in conflict? Either way, the remarkable back and forth between pulling bullish, bellicose shapes and lingering over soft, high register moments of floating tenderness suggests the actions of a common outlook or intent. There’s something about Saunders’ small-scale works, like Blue and Gray and also blaauw, that makes them feel hermetically sealed, ramping up the intensity and claustrophobia of their respective soundworlds. In blaauw one feels one step removed – on the outside looking in – but in Blue and Gray the sense of proximity is extreme, thrashed bows, growling strings and flying flecks of sweat and rosin seemingly millimetres from our ears. For me it’s the highlight of the disc, a staggeringly vivid recording of Michael Tiepold and the late lamented Corin Long (in whose memory the disc is dedicated) seemingly setting out to destroy their instruments. 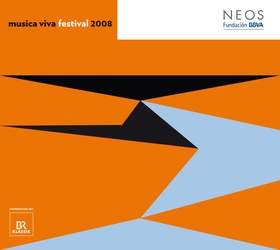 There’s another recording of Blue and Gray available, on the Musica Viva Festival 2008 six-disc box set released by NEOS in 2009. In theory it ought to be the better performance, as it’s clear from the opening minutes that either due to the microphones or the acoustic the instruments sound even closer than in the Wergo recording. It’s certainly more muscular, and the way Philipp Stubenrauch and Frank Reinecke render the first instances of lyricism is beautiful, making it feel unstable in a way that suggests it’s beyond what the players can actually attain. But as the work continues, their actions and interactions sound generally more vague and less engaging, the behavioural extremes nowhere near as polarised. It’s an interesting alternate take on the piece – currently the only work by Saunders to exist in two recordings – though the Musikfabrik performance captures with greater fidelity Blue and Gray‘s considerable dramatic range. 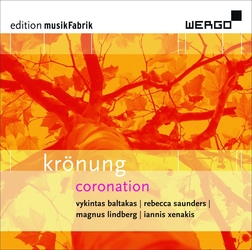 Staying with Musikfabrik – which it’s hard not to do when discussing Rebecca Saunders’ music – and returning to her earlier work, the ensemble’s 2010 compilation disc Krönung includes cinnabar, composed in 1999. Described as a “double concerto for solo violin and solo trumpet, ensemble and 11 music boxes”, it is in many ways one of Saunders’ most astonishing sonic achievements. As in traces, the players are obsessed with a particular pitch (in this case E) which over the work’s 14-minute duration makes them sound increasingly as if they’re tethered to the end of a very short leash. However, the intense repetitions, growls and violently aggressive wranglings with and railings against this pitch aren’t cinnabar‘s most striking feature.

Among the instruments in the ensemble is an electric draw-bar organ, and this is employed to create the most fantastic beating effects as a consequence of various wide clusters. On numerous occasions, it’s not at all clear that the organ is responsible for making these sounds, leading to extended passages that one can only describe as sounding downright weird: genuine WTF instances that make the work’s more vertiginous swells yet more ominous while creating an alien soundworld for the soloists’ relatively prosaic ongoing acts of compulsion. Saunders doesn’t just utilise these strange clusters for textural effect; later in the work they act in an incredible duet with percussion and piano. There’s a moment a few minutes before the end when the trumpet, left alone at the end of a section, moves from E up to F, and there’s something hugely wistful about this moment, which in turn seems to act as a catalyst that wrenches the piece finally away from E, ending up on a triumphant G that Saunders tells the trumpet to hold “as long as possible” – which in this recording Marco Blaauw heroically sustains for nearly 30 seconds. Is it triumphant, though? In the wake of this climactic moment – the soloists now silent and members of the ensemble wanly sustaining Gs and blankly tapping out rhythms – the chorus of music boxes unexpectedly starts to play, filling the closing minutes of cinnabar with clouds of mechanical incense. Music boxes feature in a number of Saunders’ works – her 1997 orchestral piece G and E on A includes 27 of them, one version of Chroma uses no fewer than 117, and in a 2016 profile in Tempo she described a dream project to create “an acoustic dialogue between two enormous banks, each of 2,500 music boxes”(!) – and their appearance in cinnabar is splendidly perplexing, seemingly removed from everything else that has happened hitherto. Their use as an external ‘found object’ is something Saunders has since turned away from; in an interview with James Saunders, she said

Since 2003, I have been training myself to do without these ‘found objects’, seeking a purely composed equivalent, which remains distinct from the tactile and overtly sensual material that provides the basis of much of my music. I am intrigued by a certain static and removed quality of these sound objects, which creates a sense of distance between the listener and the music, in contrast to the effect of a more overtly expressive music, which seeks to draw in and absorb the listener. I also explore the thin line between these two distinct areas and the musical tension that can be created out of this. […] This material all shares a certain mechanical quality, often of an intimate and melancholic nature, and I sometimes wonder whether this may be my ‘English’ self seeking a moment’s respite.

Their presence in the concluding minutes of cinnabar is decidedly eccentric, either – depending on your perspective – turning the preceding climax on its head (was it all imaginary? or did accomplishing it result in a form of derangement?), or offering a leftfield kind of supernatural validation. Either way, it’s one of many facets that makes cinnabar one of her most dazzling and memorable compositions.