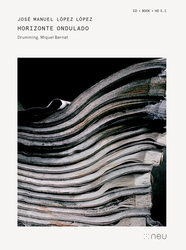 My ears have recently been extensively tickled by the sound of percussion, courtesy of Horizonte Ondulado (Undulating Horizon), the latest release from the always interesting Neu label, exploring five works for percussion by Spanish composer José Manuel López López. As always, Neu have lavishly produced the album in a beautiful slipcase containing a 60-page book discussing the music, though i have to say on this occasion i found myself unconvinced – and in some cases downright turned off – by López López’s in-depth explanations. They’re interesting from an anecdotal perspective, but what’s going on in these pieces is for the most part sufficiently straightforward to make the lengthy accompanying discussions feel excessive, almost as if they’re trying to prove a point.

The music itself, performed by percussion group Drumming and Miquel Bernat, is highly engaging, generally concerned with structures demarcated by different kinds of behaviour or texture. In the case of African Winds II for two marimbas and vibraphone, the result is a cross between a moto perpetuo and a stream of consciousness, utilising an attractive harmonic language that’s mobile yet feels fundamentally grounded. Despite being somewhat monotonous as it progresses, there’s a distinct sense of fun running throughout. Solo marimba piece Ekphrasis establishes something akin to a stasis, though created from material that’s tremulous and halting in nature, the instrument seemingly half in shadow. Very gradually López López develops this into an attractive, contrapuntal soundworld that retains something of the vagueness from earlier, passing through various passages of ticking-over tremolos.

More striking are the larger works Haikus del mar for percussion sextet and Estudio II sobre las modulaciones métricas for percussion quartet. The former is the most textural work on the disc, playing with the possibility of momentum within a context that’s essentially (at least, perceptually) pulseless. What makes the work so immediate are the gear-shifts that unexpectedly occur throughout, abruptly turning glistening metal into accents and rising scales, and transforming the lightness of maracas and shakers into juddering waves of tam-tams and cymbals. The way the music practically turns to sand two-thirds of the way through, persisting as an entirely granular soundworld, is marvellous, as are the bass drum explosives set off towards the end. Fabulous stuff. The latter work, as the name suggests, is a lengthy exploration of metric modulations, comprising a fascinating interplay and counterpoint of contrasting tempi. Like Haikus del mar, there’s a nice balance struck between tangible and less tangible (i.e. granular) material and timbres, the latter of which reduce the metric aspects of the work to soft tappings and moans, but the emphasis here is on the pulse relationships, hypnotically sliding in and out of sync such that the members of the quartet, though clearly all focused on the same thing and working as a unit, each act as discrete individuals.

The highlight for me is the wonderfully-named VibraZoyd for vibraphone and electronics, in which the sound of the vibe is seamlessly integrated with the electronics to create gorgeous shimmering melodies that, depending on your perspective, either sound entirely acoustic or entirely electronic. Only when the instrument becomes more demonstrative, exercised via loud struck accents injected into the material, does the distinction between the two elements become more apparent, introducing a pervading sense of play, the electronics tracing lines and waves in the air like the effect of persistence of vision in the wake of sparks and flashes of light. As elsewhere, López López explores textural aspects here too, taking the music into a place of granular glitter clatter, but the conclusion is the epitome of pitch clarity, a lovely bowed vibe melody embellished with small glissandi on each note, a beautiful effect concluding in a reverberant coda of pitches, each one sounding like an intense beam of bright light. Utterly rapturous.

Neu are pioneers in making their releases available in high-resolution digital formats, and in addition to the physical CD and book, Horizonte Ondulado is also available in various 24-bit/96kHz formats, including 5.1 surround (which are included when purchasing the physical edition).