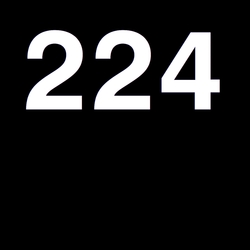 For many years now i’ve been following the output of Joseph Kramer and Noé Cuéllar’s experimental duo Coppice. Their music is not only difficult to categorise, utilising a vast array of appropriated, re-purposed, handmade and/or otherwise kludged bits of elaborate mechanical paraphernalia, but also impossible to predict. ‘Frictional’ is a word that would once have gone some way to characterising the basis of their sonic palette, but over the last few years the range and nature of the sounds they’ve employed has expanded to the point that, if you weren’t told what was being used, it would be nigh-impossible to work out. And Coppice (not unlike Matmos) have always been supremely good at detailing the appliances they wield, testifying to the sense of pride the duo has in them, and in the case of their latest release, a 30-minute album titled Surreal Air Fortress, the list of ‘instruments’ is typically eclectic, including a ‘reconstituted copper plate’, a ‘barbed object’, ‘pining object’ and ‘dead air object’, a ‘Prepared pump organ’, a ‘fake Leslie Cabinet’ and ‘fake Rhodes’, a ‘modified boombox’ and some ‘no-kink corrugated tubing’. Such a variety of sources points to either the kind of pell-mell whimsy where random things are thrown together, or to a fastidious, considered approach to the juxtaposition of elements. i think there’s a bit of both, actually – even at their most austere, Coppice display more than a trace of caprice – though overall it’s the apparent care taken in the creation of their music that’s most evident and consistently impressive.

Even making allowances for Coppice’s unpredictability, Surreal Air Fortress came as a genuine surprise. There are words! They sing!! Described by Cuéllar and Kramer as “songs for physical modelling and modular syntheses”, the essence of the two tracks on the album undeniably fits within an expanded notion of ‘song’. Each takes the form of a triptych, only the first of which, Privacy and Difference, contains words. The opening section establishes a paradigm for the whole album, specifically an intriguing lack of clarity about whether it’s the duo or their apparatus that’s the driving force, making most of the decisions. Indeed, ‘decisions’ may not really be the best word, as one of the key attributes of Surreal Air Fortress overall is incidentality: a strong sense that the collection of pulsed episodes we pass through – to call them ‘beats’ would be absurd, and even describing the music as ‘rhythmic’ is stretching a point – have emerged inadvertently as a by-product of the literal machinations of the equipment.

Though this makes the pulses weak and clunky (again, literally), it has the effect of making them much more compelling, all the more so when rogue deep pitches appear from somewhere to form the vaguest notion of a bassline that you’ll ever hear. The first and last parts of Privacy and Difference – titled ‘Coverage’ and ‘The Wall’ respectively – overlay this with a mixture of spoken and sung words that, despite being somewhat vague, nonetheless inject into the ostensibly machine-driven music some humanity. The voice keeps things brief in ‘Coverage’, but in ‘The Wall’ projects more, culminating in a quiet climax of emotional warmth, ruminating on “the will to dream and to breathe … it’s the pleasure of home”. The combination of the semi-irregular, left/right spacially-separated pulsed elements with the moody, brooding delivery of these words is magnificent; and an extra layer of incidentality emerges here, as the extent to which these words have been positioned over the top of the machine-music in a pre-planned or entirely serendipitous way (think David Sylvian) is ambiguous.

The centre of this piece, ‘Surveillance’, consists of a slow, swelling quasi-electronic tone, akin to a sawtooth (apparently created by an ‘Inductive Mixing Table’, some coils and a fan), and the opening section of second piece Darkroom, titled ‘Exposure’, is even more blank, opening with a two-minute gentle wall of brown/red noise. The machinery appears to have taken over from here on out, as a new collection of pulse patterns (sounding similar to the pops and surface noise of a needle on vinyl) become assembled. This is developed into something really beautiful in its central part, ‘Solvent/Emulsion’, where these pulses reduce to a soft ticking over and a delicate cloud of pitch floats around them. Here the perceived incidentality is absolute: the whole thing could plausibly be the result of processes with no human involvement whatsoever, and it’s really gorgeous. The piece ends with ‘Wet Hologram’, which returns to material that resembles conventional song elements, though its pulse is so laid-back as to be barely present, with passing sounds here and there that could just about be interpreted as a chord, a rhythmic fill or a bass note.

i love how liminal this music is, how it flirts at the fringes of what we understand about the structures and elements of ‘song’, pushing and pulling at the limits of familiarity to create music that, when you take a step back from it, is in fact astonishingly strange and uncanny. The term ‘incidental music‘ won’t work for obvious reasons, but maybe Surreal Air Fortress is best described as ‘inadvertent music’. Coppice have always complicated our ability to parse and understand exactly what we’re hearing, and here they’ve taken that to a sublime new level.

Surreal Air Fortress is a limited edition, vinyl-only release by the Belgian Entr’acte label, available directly from the label as well as from Boomkat, Soundohm and Careful Catalog.