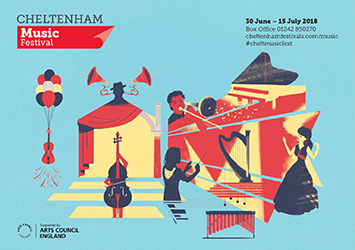 Last Wednesday at Cheltenham Music Festival saw the world premières of no fewer than four new string quartets, courtesy of the Ligeti Quartet. Interestingly, all of them were cast as single-movement structures, though in the case of his String Quartet No. 2, Michael Zev Gordon presented something akin to a swatch book, the work comprising an episodic collection of diverse patterns and hues. Mildly engaging, not really containing anything unfamiliar or unconventional, these episodes seemed like short exercises in library music, like the underscore cues for a slightly quirky British drama (think The Camomile Lawn). Somewhat lacking in substance and a bit directionless and monotonous in its later stages – some of the ideas were protracted longer than they warranted – it nonetheless had its moments. Similarly incidental was Ayanna Witter-Johnson‘s Mento Mood, a pretty, cheerful piece invoking Jamaican mento music. In many respects it sounded more like an arrangement than an original composition per se, though there were some nice passages where the material extended beyond the instruments, requiring the quartet to sing and vocalise. 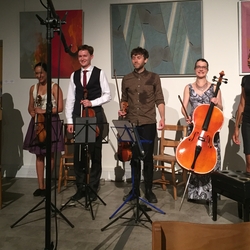 Much more involving than these was Sarah Rimkus‘ Le Dian, a piece taking inspiration from Gaelic-language musical traditions. Rimkus sets up a diatonic world, powered primarily by cycling rising minor thirds, from which the instruments then broke away, led by the cello. This established a pattern of harmonic side-steps resulting in nice collisions and ambiguity along the way yet never interrupting the constant flow of the material. A later episode, where the rising motif was explored at length, was truly hypnotic. The most outstanding of these four new quartets was Bethan Morgan-Williams‘ Ghost Tongues. In keeping with the referential aspect that permeated all the pieces, Morgan-Williams’ music appeared to be derived from folk music, though in the most marvellously oblique and obscure way. It would be simplistic – no, it would just be plain wrong – to say that the piece was ‘folk-like’, yet at all times there was something about the material that, in ways difficult to articulate or even understand, made an indirect but undeniable connection back to a folk origin. This fluid, uncanny sense of familiarity was sometimes expressed in exploded form, the music pulled apart into small fragments, before reforming or shifting into a kind of prismatic lyricism, conveying melodies and harmonies as if refracted through the instruments. This back-and-forth between poles of extended lines and atomised pizzicatos were mirrored by the work’s expressive scope, Morgan-Williams not afraid to let the music become pensive, even allowing it to fall silent a couple of times. Though episodic, it all felt part of the same underlying argument, concluded in a lovely ‘dirty’ major seventh chord, as though a cadence had been forced onto the end. A really brilliant piece that i can’t wait to hear again.

In Cheltenham’s elegant Pump Room on Saturday morning, the Berkeley Ensemble presented a programme of music that only made the already soaring temperature feel even hotter. Alongside works by Ravel and Debussy, the concert featured pieces by Kenneth Hesketh and Michael Berkeley. Hesketh was represented both as composer and arranger. His arrangement of Debussy’s Deux Arabesques avoided the trap of muddying or complicating the original, and while, by necessity, had to sacrifice some of its quicksilver pace, Hesketh managed to preserve the music’s essential lightness of touch, in the second Arabesque even ramping up the cheekiness present in Debussy’s material. Hesketh’s more recent arrangement of Debussy’s Les soir illuminés par l’ardeur du charbon – the score of which was only discovered in 2001 – received its first performance; it would have been best placed at the start of the concert as it’s a perfect curtain-raiser, like a palate cleanser, short and beautifully refreshing.

Hesketh’s setting of the Brothers Grimm, The Singing Bone for soprano and ensemble (another première, here in a revised version), abruptly switched the mood to something much more dark and disquieting. The musical language was perhaps too accompanying for its own good; Hesketh wrung out every ounce of potential from the words, resulting in an almost stylised level of high drama, though the presence of over-familiar archetypes – such as tremolando strings and rapid, pointed upward harp glissandi at tense moments – in conjunction with thickly-scored melodic lines (something i’ve remarked upon in Hesketh’s music before) meant that the character of the work felt, not exactly formulaic, but nonetheless somewhat generalised and conventional. All the same, serious Kudos are due to mezzo-soprano Anna Huntley for creepy relish she brought to her role (and it’s worth mentioning that her performance earlier in Ravel’s Chansons madécasses was dazzling). (Michael Berkeley’s 1981 Nocturne, evoking time spent in the Mediterranean, was utterly sublime. i don’t know why Berkeley’s music is not more widely heard in the UK; i can’t claim to be an expert in his music – i’ve heard only a relatively few pieces over the years – but everything i’ve encountered is full of character and exquisitely constructed, a perfect blend of head and heart. His Nocturne, given a fittingly balmy performance by the composer’s namesake ensemble, was no different, tapping into the same kind of swoon-inducing humidity as Debussy’s Prélude à l’après-midi d’un faune, quasi-improvisational, its ideas rocking and meandering gently as if within a haze. Berkeley’s post-(never neo-)Romantic musical language was genuinely delicious, especially when developed into a lush, rich swell of counterpoint, though at no point did the music milk its ideas: indeed, its climactic sequence is unexpectedly pulled back into darkness, leading to a subdued conclusion that only reinforced the intensity that runs throughout, rudely broken by a brutal final snap. A gorgeous piece.

The remarks i made about Hesketh’s The Singing Bone apply in a similar way to the work that brought this year’s Cheltenham Music Festival to an end, Joseph Phibbs‘ new chamber opera Juliana. Though certainly an engaging and interesting piece, it has several glaring problems. First, the adaptation of Strindberg’s narrative – the opera is based on his play Miss Julie – renders the character of Kerstin completely absurd, reducing her to an impotent figure with absolutely no agency, resigned to wondering around looking aghast and appalled at events going on around her (not in any way helped by her being absent from most of the second half of the piece). Second, and this applies again to the character of Kerstin, there are sudden references partway through to “Racing speedboats in the dark” – which at first appeared to be a rather laboured metaphor for the hot ‘n’ heavy interactions of Juliana and her servant Juan. It turns out, though, that this was intended to be a reference to literal boats being raced on the lake by a girl and boy who are never referred to, never seen, and whose subsequent crash and death had precisely zero effect on anything at all in the story (apart from giving Kerstin another reason to look pained). This doesn’t appear obviously to relate to anything in Strindberg’s original, so quite what the purpose of this weird, ineffectual addition to the narrative was meant to be is impossible to say. 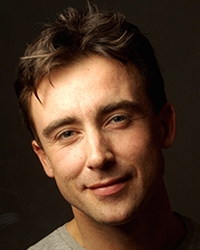 Third, Phibbs’ music has, in essence, three modes of expression: Latin-infused/-inspired material (hints of Bernstein and Copland) to accompany Juliana and Juan’s flirtatious dialogue and dancing; somewhat cartoonish and generic minimalistic bursts of arpeggios and runs for the rest of the exchanges; and extended drone-based passages for more introspective and personal episodes. This compartmentalisation of the work’s musical language worked quite well, particularly in terms of clarifying (not that much clarification was needed) the nature of the narrative at any given moment, though over time it had a tendency to reduce the drama to inhabiting just these three poles. Beyond this, the generic mode – and Phibbs is by no means alone in resorting to this kind of thing – became increasingly tiring and irritating over time, seemingly used to pad out conversations in order to avoid having the ensemble simply fall silent. There’s an interesting comparison to be made, i think, to Thomas Adès’ Powder Her Face, another work exploring a woman’s exercising of power and authority and its complex, tragic intermingling with sex, which also borrows from existing musical tropes, which includes similar sexual high jinks – Adès included a blow job; Phibbs a toe job – and which, coincidentally, was also premièred at Cheltenham. Where Adès’ borrowings sound integral, part and parcel of the characters’ identities and actions, Phibbs’ music seemed fabricated and functional, often passing time, lurking at the periphery, rather than actively driving the story along. There was something undeniably beguiling about the dronal sequences, though Phibbs’ increasing reliance on them, especially towards the end of the piece where they incessantly persisted for what seemed like at least ten minutes, rather wore out their effectiveness.

In spite of these reservations, Juliana was an intriguing and, at times, very striking experience, and the chemistry between soprano Cheryl Enever (Juliana) and bass Samuel Pantcheff (Juan) was excellent. But it’s a piece that could do with some amendments and pruning (the speedboats!) in order to keep its narrative properly in focus. But even with such amendments (which, of course, won’t be made), one couldn’t help feeling that this was a very polite rendering of a decidedly impolite story. As i left Parabola Arts Centre, reflecting on the opera, i couldn’t help re-hearing in my mind Juliana’s words from earlier: “Too tame. Too tame. Let’s raise our game.”