And so to the annual conveyor belt of over-cranked fripperies and falderals that is the last night of the Proms. Nestling among them – not, for a change, getting the party started – was the last première of this year’s season, Songs of Darkness, Dreams of Light by British composer Roxanna Panufnik. Like several other 2018 Proms premières, the piece was commissioned as a commemoration of the end of World War I. For her text, Panufnik draws on two sources: a poem by Isaac Rosenberg titled ‘In the Underworld’ and words from the conclusion of the final section of Kahlil Gibran‘s poem ‘The Prophet’. The combination of these two texts is interesting; Rosenberg’s (expressing a personal heartbreak) speaks not merely of separation but of a more severe, experiential disconnect, while Gibran’s articulates a more benign separation, one that holds open the prospect of a (real or imagined) future meeting. These two texts are assigned to the two choruses used in the work, which in this first performance were the BBC Singers and BBC Symphony Chorus, alongside the BBC Symphony Orchestra, conducted by Andrew Davis.

Let’s start with a couple of positives. The work has a sombre yet buoyant tone, optimistic but, for the most part, Panufnik keeps everything restrained in order to maintain an atmosphere that’s dreamy and even somewhat heady. This restraint applies also to the nature of the music: never a composer to hold back from lashings of musical sugar, it’s some relief that Songs of Darkness, Dreams of Light is a much less saccharine and sentimental affair than one might have anticipated. Furthermore, the way Panufnik holds those two texts in balance with each other is rather striking on a first listening. 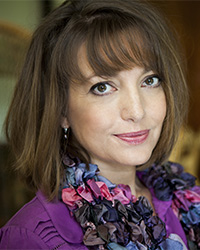 However, i’ve come to the conclusion that it’s this very balance that undermines and militates against the piece. Musically, the texts don’t so much complement as cancel each other out, with the result that much of the considerable emotional weight packed inside their remarkable words is rendered impotent. Their poetry doesn’t exactly become prosaic – though the way Panufnik underpins them with a regular timpani pulse early on isn’t exactly helpful – yet their power is certainly lacking in the listless, overlapping vocal mush that they inhabit here. We speak of words being ‘set’ to music, but in this context they’re ‘set’ in the same way that a jelly is set, fixed in place such that their expressive capacity is, if not nullified, then drastically limited.

Towards the end, Gibran’s text speaks of the prospect of hearing a “deeper song”, which unfortunately only highlights the shallow extent of Panufnik’s response to these words, the determined safety and dynamic flatness of her music, the empty predictability of its shouty, ostensibly expectant, bolt-on ending. It’s great – genuinely great – that, of all nights, the last night of the Proms gets a new work that doesn’t just blankly cavort on auto-pilot through all the usual hoops, yet while Songs of Darkness, Dreams of Light is about as harmless and inoffensive as one could possibly imagine, anyone listening to more than just its superficially pretty surface is likely to find the work torpid, inanimate and, ultimately, inert.

Which brings us with a shrug and a sigh to the end of another Proms season. Many thanks to all the thousands of readers who’ve come with me for the journey through this year’s crop of premières, and especially to those of you who have expressed your own opinion on each piece either in the comments or in the accompanying polls. As usual, i’m going to keep the polls open for another two weeks, so that there’s plenty of time to vote on all the pieces. At the moment, for obvious reasons the works premièred earlier have got a larger number of votes than the more recent pieces, so some extra time will help to balance that out a bit. To express your view on each piece, you can either use the poll at the bottom of each article or head over to the complete Proms Polls page. In a fortnight’s time i’ll present a summary of how you all voted along with some afterthoughts and reflections about this year’s season.

I have lived in the underworld so long:
How can you, a creature of light,
Without terror understand the song
And unmoved hear what moves in night?

I am a spirit that yours has found,
Strange, undelightful, obscure,
Created by some other God, and bound
In terrible darkness, breathing breath impure.

Creature of light and happiness,
Deeper the darkness was when you,
With your bright terror eddying the distress,
Grazed the dark waves and shivering further flew.

(Isaac Rosenberg, In the Underworld)

Farewell to you and the youth I have spent with you.
It was but yesterday we met in a dream.
You have sung to me in my aloneness, and I of your longings have built a tower in the sky.
But now our sleep has fled and our dream is over, and it is no longer dawn.
The noontide is upon us and our half waking has turned to fuller day, and we must part.
If in the twilight of memory we should meet once more, we shall speak again together and you shall sing to me a deeper song.
And if our hands should meet in another dream, we shall build another tower in the sky.

(Kahlil Gibran, lines from the final part of The Prophet: ‘The Farewell’)