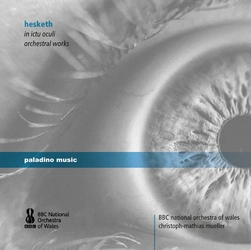 One of the things i’ve noted previously when writing about the larger-scale music of Kenneth Hesketh – which in general i’ve admired very much – is its tendency toward what i’ve called “laser-sighted focus”. This peculiar kind of über-clarity is exhibited in many of Hesketh’s works from the noughties, and from my perspective has proved problematic, not only becoming rather tiring, but actively working against what seemed to me to be the composer’s more fundamental (and engaging) instincts for more unconventional, nebulous forms of drama and narrative. So it’s interesting to be able to compare then and now with a new disc of more recent orchestral works released last month on Paladino Music. The three featured works, performed by the BBC National Orchestra of Wales conducted by Christoph-Mathias Mueller, were all composed during the last few years, and right at the outset it’s abundantly clear that much has changed, about which more in a moment.

If there’s a weakness shown here, it’s only to be found in Of Time and Disillusionment, where one encounters (in the first and fourth movements) vestiges of the kind of crystal-clear, spiky, spritely material so beloved by mainstream British composers, energetic Faberian froth that invariably sounds hackneyed and empty. However, and this is also something i’ve mentioned before, both the nature and the treatment of such material in Hesketh’s music has always managed to save it from ever sounding commonplace or generic, and the same is true here. The fourth movement, in particular, keeps veering away from mundane frivolity into weird asides, where we find burbling bassoons together with a soft glockenspiel (hard to tell if they’re in a dialogue or just blatantly ignoring one other) or a lovely kind of snappy swagger, where the orchestra sounds like they’ve drunk rather too much and are now trying to pick a fight. Far more telling, though – even more than the delicious traces of (French-inspired) opulence that are a definite Hesketh fingerprint – are the surprising levels of violence that rear up from time to time, yanking the structure around with such force that, if it wasn’t for the music’s traces of playfulness and retreats into delicacy, one might start to feel intimidated.

Yet that’s precisely what one feels in the other two works, Knotted Tongues and In Ictu Oculi, where the levels of ferocity don’t merely work against but actively destroy the focused precision heard in his earlier works. In the former, the violence is often overwhelming: a mere 70 seconds into Knotted Tongues, following some amorphous shapes and the barest whiff of disquiet, Hesketh unleashes the most enormous eruption, a completely unexpected detonation that sends sparks and fragments of musical shrapnel flying all over the place. Even more impressive than this, though, is the fact that it doesn’t in any way release the musical tension, but somehow maintains it, even cranks it up a notch or two. Throughout Knotted Tongues, Hesketh maintains tension for long periods without letting up, despite the piece moving through a widely varying topographical landscape. In part he achieves this by avoiding the usual notion of ‘climaxes’; so instead of arriving at concrete ‘peaks’ we instead experience extended ongoing thrusts and surges, sometimes littered with accents making the surface seem like it’s sizzling, elsewhere breaking and reforming like waves crashing on top of us, or just letting rip in vast quantities of full-blooded strata that threaten to crush everything. These passages find a contrast in more discretely-detailed episodes that establish rhythmic momentum or open up windows into more uncertain, exploratory and dreamily opulent music (allowing the tension to dissolve somewhat).

It’s these contrasts that make the bigger punches hit so hard, and that’s utilised to an even greater extent in In Ictu Oculi. Despite the fact it’s subtitled ‘Three Meditations’, this is one of Hesketh’s most powerful compositions, demonstrating a range and amount of volatility that’s genuinely unsettling. It’s hard to say whether this is the product of introspection (as that subtitle suggests) or something more instinctual, but the back-and-forth between spotlighting lyrical, carefully-articulated individual lines and gigantic onslaughts of overloaded mass action is so extreme that it feels positively unhinged. Here is the polar opposite to the diamond-cut clarity of Hesketh’s earlier work: where details become flotsam on a sea of uncertainty, where groups of players at times sound like they really have no idea what on earth they should be doing next, where the orchestra gets stuck as if held by a tractor beam, and where an earnest, gentle idea is subjected to a relentless barrage of hammer blows rained down upon it. There’s something deeply heartfelt and honest about such massive amounts of internal wrangling as this, summed up in an almighty cry that the orchestra lets loose towards the end. There’s real fear captured in this, horror even, but every moment of it is achingly real and immediate (it seems fitting that the artwork for the album is a close-up of an eye (presumably Hesketh’s own), since the music provides its own metaphorical window into a soul (possibly Hesketh’s own)). At first, i wasn’t sure that In Ictu Oculi needed the uncomfortable ‘shiver’ it has right at the end, but then i realised the orchestra was simply doing what i was doing. Spine-tinglingly brilliant, this is Hesketh at his absolute best.

[…] idea is subjected to a relentless barrage of hammer blows rained down upon it.” (reviewed in December) […]