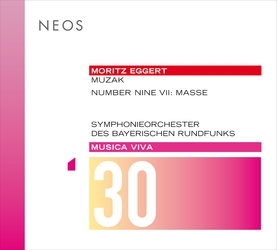 It’s often not easy to put into words how or why a piece works, and in the case of Moritz Eggert, i’m literally starting this article not at all sure what on earth i’m going to say. The latest Musica Viva disc on the NEOS label – Vol. 30, which testifies to NEOS’ incredible ongoing commitment to avant-garde music – is dedicated to two of Eggert’s works, performed by the Bavarian Radio Symphony Orchestra: Masse, the seventh in his ‘Number Nine’ series, and Muzak, a piece for voice and orchestra dedicated to the late David Bowie. Having written recently about one contemporary response to muzak, it’s interesting to encounter another one, although straight away there are some issues with that title and its implied accompanying conceit.

It’s not actually about muzak. Not even remotely. As a musical entity, muzak isn’t bound within the limits of one particular genre. Instead, its primary characteristic is to be an especially light, anodyne and inconspicuous version of whatever stylistic manner is desired, usually some form of pop, rock or jazz. The distinction between the original musical form – the ‘parent’ – and the muzak rendition of it – the ‘child’ or, better still, the ‘bastard’ – is an essential one: the former seeks active attention, the latter requires passive (even subliminal) acknowledgement. The main problem with Eggert’s Muzak is that this distinction is essentially lost. The piece, conducted here by David Robertson, is constructed as a collage of generic tropes that process past as if on a conveyor belt, snippets and fragments that allude to various kinds of what Eggert summarises as “commercial music”. Perhaps inevitably, jump-cut juxtapositions between sharply dissimilar idioms is amusing, and this is evidently no accident. The reality that the piece has a deliberately comic sensibility is reinforced in part by the often hilarious delivery with which Eggert himself performs the role of the solo voice, singing, crooning and otherwise articulating a stream of allusions to the “clichés or platitudes of pop music” (the composer’s words). One especially funny section takes an extended pot-shot at the arch-nemesis of good taste André Rieu, references to his name causing Eggert’s voice to become quietly apoplectic, letting out a collection of barely-repressed f-bombs.

In terms of what it is, Muzak is certainly an entertaining work, and it throws up some interesting considerations on the importance and integrity of genre definitions and their concomitant stylistic boundaries. Listening to the piece makes one acutely aware of how easy it is to compartmentalise the way we collectively regard music. But the work’s issues are significant, and potentially insurmountable. Whether Eggert really needed to explore this for 42 minutes is highly debatable, but far more problematic is the way that, due to him not making his music exhibit the obvious kind of bowdlerisation that identifies muzak and distinguishes it (if that’s the right term) from its ‘parent’, he unwittingly creates an equivalence between them and ends up seemingly mocking popular musical idioms en masse, a situation not helped by the accompanying text. It’s impressive that Eggert manages to hold the entire piece together despite such ludicrous stylistic episodic shifts and, on a superficial level at least, make it actually work, yet the overwhelming tone of sarcastic condescension that permeates Muzak makes for an increasingly uncomfortable listen.

The other work on the disc is a much more direct and inspiring musical experience. In Masse, Eggert set out “to write an orchestral piece in which all the musicians would have to play without pausing”. Based solely on this recording (i’ve not seen the score) conducted by Peter Rundel, it’s pretty easy to believe that, once the piece has got going, after a faltering start, every moment of its 18-minute duration does involve all of the players doing something. Constantly. i’ve never heard anything quite like it, to be honest; the cumulative effect – and to do it properly, Eggert of course uses a large orchestra – is by turns incredibly unwieldy and hopelessly over-detailed. When the orchestra is united, it’s impossible to describe the players as moving “as one”, as it’s only too obvious how many individuals are involved in each musical idea. And when unity is abandoned – more often – it’s about as preposterously variegated as music could ever be, a dawn chorus in extremis.

It seems to me there’s something triumphant about Masse, and that its occasional coalescences into foot-stomping rhythmic poundings and motivic machine-building like Beethoven on steroids aren’t desperate attempts at consensus but miracles of group coordination that practically defy belief. And as for the rest, it’s hard not to hear in the outbreaks of individuated anarchy an unfettered sense of joy, the orchestra perhaps united by their deliberate disunity. The final climax of the piece conjures up the exhilaration of an enormous mass rally, answered by a weird collection of high straggling squeaks, like letting the air out of a large balloon. It’s a breathtakingly audacious achievement.