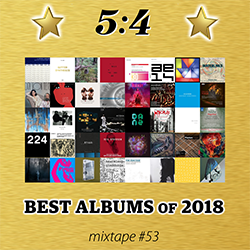 Many thanks to all of you who have read, followed, commented, shared, promoted and otherwise supported the blog during the previous year, most especially to my beloved band of Patrons. i’m starting 2019 in the usual way, with a new mixtape featuring something from each of the brilliant albums in my Best of 2018 list. Being such an eclectic list, the ‘narrative’ of this mixtape is one that unavoidably veers between quite wildly dissimilar styles and aesthetics, but to my ear that only makes it all the more interesting and fun.

40 tracks (well, technically 41: Jóhann Jóhannsson’s were short so i included two) that testify to and celebrate the range and scale of musical wonders created during 2018 – the full tracklisting is shown below, and links to buy each album can be found in the previous two days’ articles.