One of the plagues that continues to afflict most contemporary music festivals is ‘première-itis’, an acute obsession with presenting loudly-trumpeted world premières at the expense of providing opportunities for second, third or indeed nth performances. It was a relief, therefore, that this year’s Dark Music Days (which was otherwise similarly infected) included a number of concerts ​with virtually no premières at all, the first of which was a recital given last Thursday by UK cellist Zoë Martlew.

The concert took place in the imposing cuboid space of Kaldalón Hall, part of Reykjavík’s flagship concert hall complex Harpa, with a programme focusing on Danish and Norwegian music. However, it was a piece by English (Denmark-based) composer Juliana Hodkinson that turned out to be the most flamboyantly memorable, though not primarily for musical reasons. Titled Scrape, it lives up to its name by stipulating that the cellist should scrape heavily not just their instrument but also against a piece of metal, which Martlew had realised with a cheese grater tied to her right foot. The first attempt to perform the piece ended after just a few seconds when Martlew’s bow was spectacularly shredded, its horsehair loosely flapping around; it was hard to tell whether this was a direct consequence of its grinding against the strings or just a coincidence. The second attempt, Martlew having dashed off-stage for a replacement, was more successful inasmuch as the bow held together, although the cheese grater was now doing its best to rebel against Martlew’s actions, turning at 90° to her foot, thereby making it difficult to control. Whether all of this effort was worth it is a good question. Scrape could (charitably) be described as a celebration of the essence of music-making, of the friction essential to the production of all sound, though the way its relentlessly screeching soundworld soon lost much of its impact and power plus the lack of a cogent shape or structure made the piece an exceedingly dull experience. 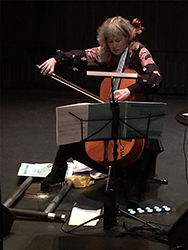 The first movement of Danish composer Anders Nordentoft‘s Impetuoso opened the concert with an interesting kind of lyricism that had a stream-of-conscious quality to it, following its nose to the outer regions of the cello’s range. By contrast Wings of Spring by fellow Dane Bent Sørensen, which ended the concert, opted for a melody so gentle and internalised it was as if Martlew were discreetly playing to herself and we had intruded upon her. It was an unexpected and rather haunting way to conclude the concert. Though it lasted barely three minutes, Spectre Gul, created by Norwegian cellist Tanja Orning (best known to UK audiences as part of the ensemble asamisimasa) in collaboration with Christian Wallenrød, was like a futuristic, post-religious hymn, a cello harmonic line moving slowly together with a blippy electronic part to create music of the most still, peaceful serenity.

Iceland was represented by Daníel Bjarnason‘s Bow to String for cello and electronics, one of the works featured on his 2010 album Processions. While Martlew’s performance lacked the clarity heard on the recording (as most live versions probably would), this actively fuelled the driving irregular momentum of opening movement ‘Sorrow conquers happiness’, making it sound not just frantic but borderline reckless, its chorus of additional cellos like an angry circling mob. The echoing periods of repose that interrupt this mayhem felt all the more personal and ethereal as a result, streaks of allusive wistfulness hanging in the space like a floating chorale. The following two movements were superbly moody and melancholic respectively. In the second, ‘Blood to Bones’, Martlew’s material became a searching surface level element amidst dark, chugging pizzicati depths, while in the third, ‘Air to Breath’, though the music at times evoked the filmic tendency that has undermined some of Bjarnason’s work, Martlew ensured its plangency overcame the sense of being manipulative or cliché, bringing the work to a decidedly poignant and mournful end.

The most revelatory music came from Norwegian composer and guitarist Bjørn Fongaard. Fongaard (who died in 1980) worked extensively with microtonal tunings, apparently developing a guitar the fretboard of which could be tuned to any number of octave subdivisions. Much of his work remains in obscurity, but Cato Langnes, sound engineer at NOTAM (Norway’s version of IRCAM), has in recent times rediscovered and restored some of Fongaard’s compositions, including the tape part of his 1976 Concerto for cello and tape, which over four decades later was finally receiving its first performance. Initially, it seemed as though the connection between the cello and tape was one of mere perspective, the former a forceful presence in the foreground, the latter a brooding atmosphere everywhere else. But over time this perception was refined such that the two became a single sonic entity, Martlew’s instrument now heard as a clarified focal point. As the Concerto unfolded, Fongaard adjusted the relationship, introducing harmonics, pizzicati and more abstract, clattering cello sounds onto the tape, subsequently imitated by the soloist (or perhaps it was the other way round) to reinforce the connection more overtly. Yet Fongaard’s primary interest in this piece is to use the tape to do what the cello cannot, ultimately establishing a huge, rumbling reverberant texture into which Martlew’s subdued trills and low, lugubrious melodic line were seamlessly integrated.

Notwithstanding what i said at the start about ‘première-itis’, this was the best possible kind of world première: an introduction to an evidently significant yet neglected composer and the realisation of a work almost lost to oblivion. Considering the work number of the Concerto for cello and tape is Op. 131 No. 20, it would suggest there’s a considerable amount of music by Bjørn Fongaard that’s just waiting to be similarly rediscovered. Following Martlew’s performance, i can’t wait to hear more.